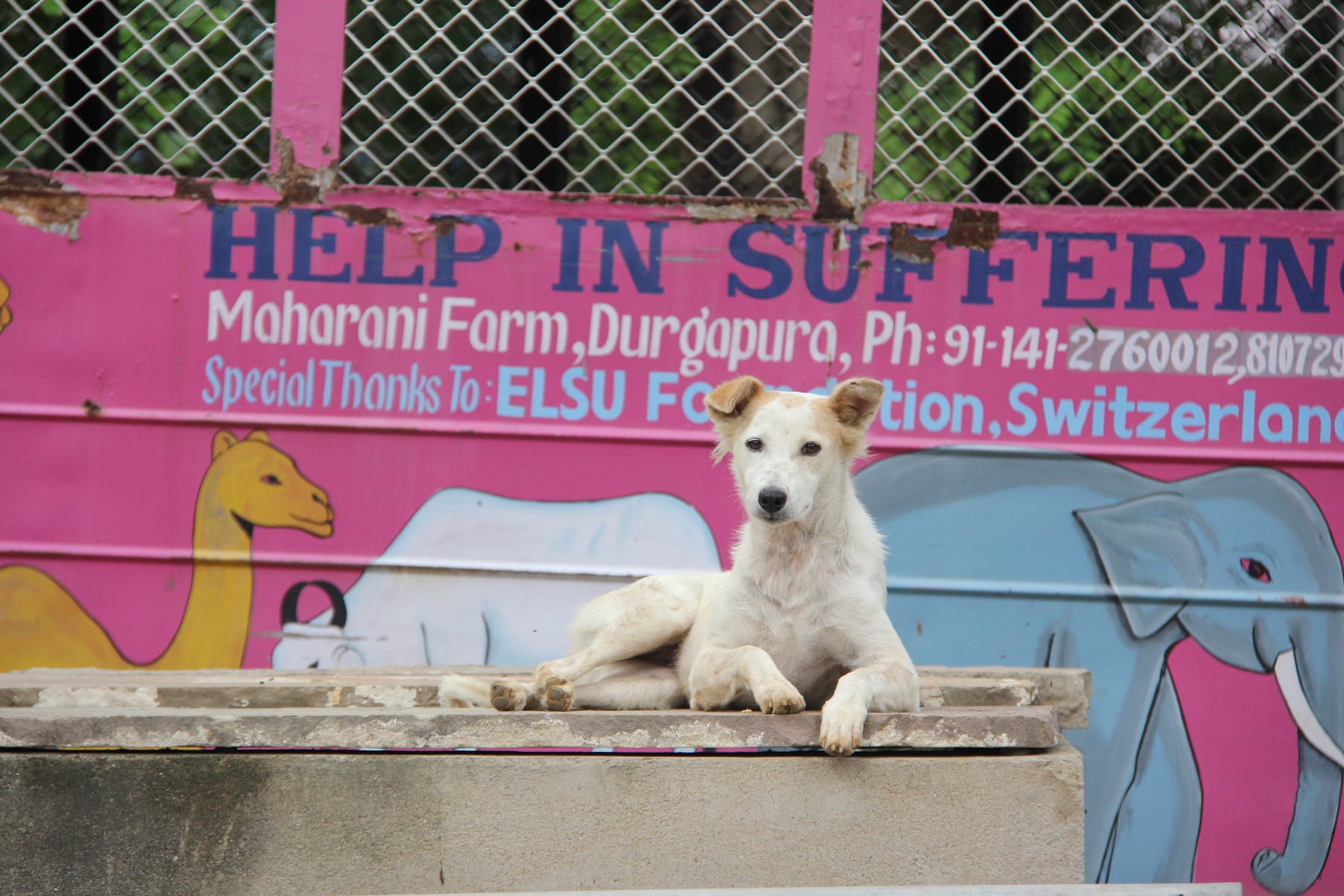 Help in Suffering  is the Consortium Implementing Partner (CIP) for the Global Dog Campaign in Jaipur, India.

Jaipur is the capital city of Rajasthan state and is the tenth-largest city in India. Jaipur’s population (3,909,333 people in an area of 467 square kilometers – a density of 8,400 residents per Km) grew at over 4% a year in the 1990s, but population growth has slowed this century.

Help in Sufferiing (HIS) was established in 1980 by Crystal Rogers, a British expatriate. In 1991, Christine Townend, an Australian animal advocate, moved to Jaipur to take over HIS management. Two years later, HIS was approached by the World Society for the Protection of Animals (WSPA – now World Animal Protection) to test the Guidelines for Dog Population Management that WSPA had produced in cooperation with the World Health Organization. HIS prepared an Animal Birth Control (ABC – street dog sterilization) plan to create a friendly, stable, rabies-free street dog population which WSPA then agreed to fund. 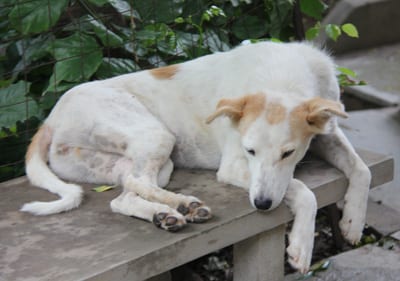 In November 1994, the HIS-ABC pilot project was launched in the “pink” city area of Jaipur (the central city around the palace). The project was a test of the dog management guidelines. It was also launched to prevent further municipal attempts to control the street dog population by poisoning (an approach that had demonstrably failed because the street dog population was not declining).

HIS has continued to support the project to the present. Remarkably, HIS has collected street dog population data from 1997 onwards and has a complete set of records of dog sterilizations and dog vaccinations going back to 1994. HIS is one of the few animal organizations in the world to collect and publish time-series data on their activities over twenty-five years. These data document the following:

HIS continues to conduct street dog counts and track its dog sterilization program. It is the ONLY humane street dog management program globally that has collected more than ten years of data on the number of dogs treated, the impact on street dog welfare and numbers, and the impact on human health and community well-being. As a result, we can determine the positive impact of sterilizing around 10% of females annually when such a surgery program is conducted systematically over many years. The percentage of female street dogs sterilized reached 70% six years after the launch of the project. Male sterilization started six years into the project, and 70% of males were sterilized seven years later.

As the human population grows, the street dog population will also tend to grow without any management program. In Jaipur, the relative number of street dogs (dogs per 1,000 people) has fallen by 75% since the project started in 1995 (Figure 7:2). 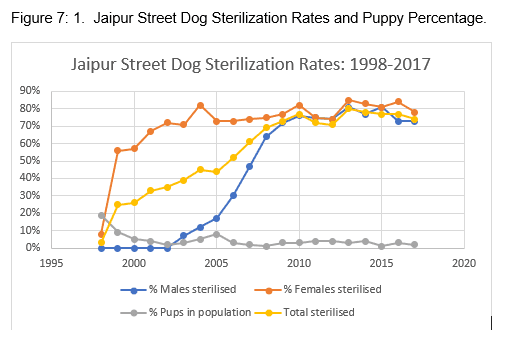 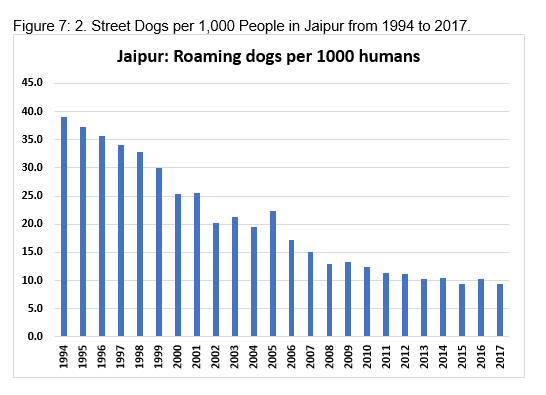 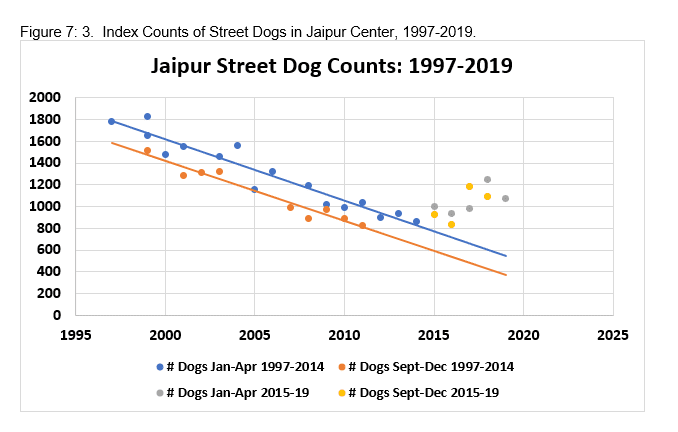 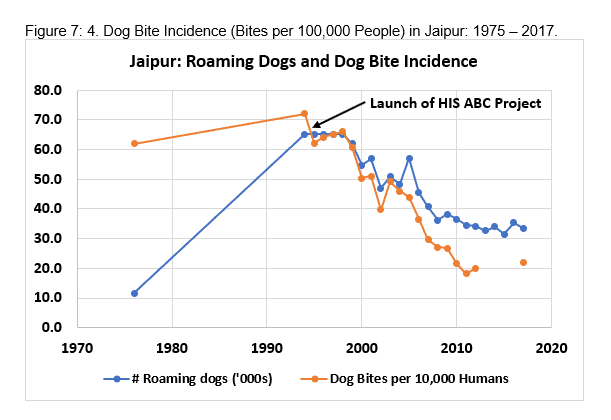 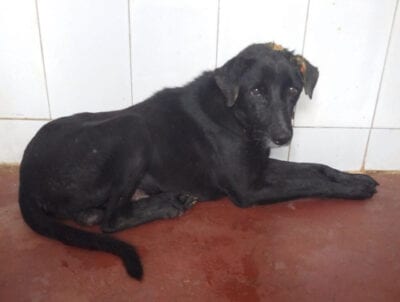 The HIS project in Jaipur has produced several important scientific reports on the impact of street dog sterilization and vaccination on the dog and human well-being. In 2006, a scientific report by Reece and Chawla (two HIS veterinarians) documented a decline in human rabies cases to zero following the launch of the sterilization/vaccination project while the number of human rabies cases was unchanged in a control region outside Jaipur. Follow-up papers documented dog surgery outcomes, dog population changes, and a two-thirds reduction in the number of dog bites per 100,000 citizens since the project started (see Figure 7:4). Finally, an economic analysis (just published in 2020) documented the community benefits (both in terms of health outcomes and municipal economics) of the HIS project.

It appears that the engagement with dogs in India has been changing over the past decade or so. Private veterinary practices are springing up (fifteen in Jaipur since the turn of the century compared to only the HIS clinic, the government clinic, and a clinic at a private veterinary school) and probably reflect a growing human-pet dynamic in the city. Because of the 25-year record in Jaipur, it should be possible to document these human-pet changes in the coming decade.