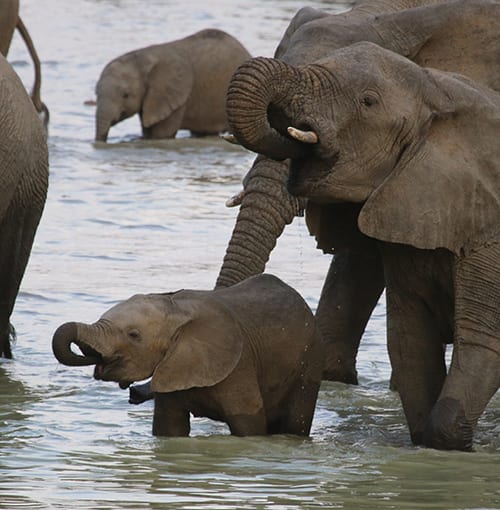 Elephant calf drinking in Zakouma, NP, Chad as part of the largest elephant herd in Africa. Photo by Thomas Clode

The Chadian government established the Zakouma National Park, a 3,000 Km2 area in the south-east of the country, in 1963. At the turn of this century, the park was home to 4,000 elephants. Unfortunately, in 2002 it was targeted by poachers, and by 2010 it was estimated that there were only around 450 elephants left. Virtually all breeding had stopped because the survivors were so stressed. Chad then contracted with African Parks, a relatively new NGO, to manage Zakouma and gave it complete authority over the park.In short order, the NGO engineered a remarkable turnaround. In 2010, there were very few or no elephant births and in 2011, African Parks counted only one elephant under five years old in the park. But by 2018, there were 127 young elephants under five. The elephant population is now approaching 600 individuals. Since 2010, only 24 elephants have been poached compared to hundreds per year from 2002 to 2010.
This is not just a wildlife success story. African Parks has also built strong relations with the communities around the park who had suffered along with the animals because of a general lack of security. The African Parks team developed relationships and trust among the local communities and, having established safety and security, the park is now home to an astonishing array of wildlife and is the largest employer in the region. Education, especially environmental education, is also a focus of the park’s managers. From 2013 to 2018, 17 schools were built and supported, and over 6,500 children received an education. The Zakouma veterinarian has been vaccinating local cattle against anthrax and support has been obtained for human health services as well.
There have been over 25,000 visitors to the park since 2010, half of them local Chadian citizens, and in 2018 tourists generated almost $700,000 of revenue.
In the wake of this success, the government of Chad has now asked African Parks to manage the Ennedi Natural and Cultural Reserve, a 50,000 Km2 area where approximately 30,000 people live. The Ennedi Massif was declared a UNESCO World Heritage site in 2016 for its extraordinary rock formations and significant collection of rock art. It also is home to relict fauna and flora including desert-adapted crocodiles. African Parks has started working with local communities to ensure that Ennedi is also conserved in a way that benefits people, animals and the environment.
Print page