Jun 19, 2022 Wildlife Centers and Living in Harmony with Nature and Pelicans

Nestled in a high-density population area and abutting an international airport resides the South Florida Wildlife Center (Center), founded 53 years ago with a mission to rescue, rehabilitate, release and educate. The Center occupies a secluded tree-covered 4.1-acre site with a 1.2-acre “jurisdictional wetland” area. The site provides a haven for wild animals needing care due to sickness, injury, and abandonment but also includes a variety of tree species such as Gumbo Limbos, Sea Grapes, Buttonwoods, and Oaks, along with Cabbage Palms.

When entering the site, a person is immediately struck by the tranquil setting, the sense of nature, and the animals. With UN agencies predicting that 70% of the world’s population will live in urban areas by 2050, spaces like the Center occupies will be difficult to protect from future development. Nearly 75% of the Center’s admissions result from negative experiences with humans and human activities. However, the Center, through its Education, Operation, and Outreach program, addresses this issue directly by working to educate the public about the importance of animals in balancing our ecosystems and peaceful coexistence in the increasing demand for space.

Although the setting is tranquil, that peacefulness belies the actual pace of the Center’s operations. The Center is centrally located in Broward County, Florida, but serves not only the county but also parts of Palm Beach and Miami Dade counties. Supported by its highly qualified staff, the Resource Center expedites hospital admissions and provides over 50,000 community members with information about reuniting young wildlife with mothers and injured animals annually. 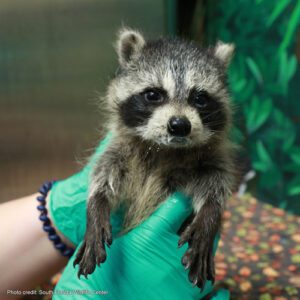 The Center’s Hospital is the highest-volume wildlife hospital in Florida, admitting 10,000 to 12,000 animals annually and treating up to 300 species. With its state-of-the-art diagnostics, intensive care units, and health and medical care delivered by a professional medical staff, it is understandable why people would travel across county lines on congested roads to the Center to obtain help for injured and ill wildlife.

The Center’s Wildlife Nursery raises almost 4,000 orphaned birds and mammals each year. They are nurtured and readied for a successful release by experienced and dedicated staff and volunteers. Once admitted to the Center’s care, animals receive expert Rehabilitation, including hydrotherapy, feather imping (fixing damaged feathers), and therapeutic ultrasound to speed healing. The Rescue and Release programs provide essential services to the Center. Rescue and release specialists, staff, and volunteers contribute to the capacity for these programs and log over 70,000 miles in Center vehicles. These collective efforts can be illustrated in the story of the Brown Pelican.

According to the Cornell Lab of Ornithology, the brown pelican (Pelecanus occidentalis) can be found in coastal marine environments from central North America to northern South America. They are “highly social all year-round and breed in colonies of up to several thousand pairs.” 1  Fish and some marine invertebrates are their primary food source, putting the pelican in direct contact with anglers. Entanglement in sport-fishing gear is a major cause of pelican mortality in the US.2

Often, pelicans caught by fishing hooks die if the line is cut and the hook remains embedded in the animal. This lethal outcome is also true for pelicans who ingest fish with embedded hooks. Although the Center’s goal for hook and line patients is treatment and release, the odds of successful outcomes depend on where the hook is embedded and how tight the fishing line is wrapped around the patient. Fortunately, the Florida Fish and Wildlife Conservation Commission has developed initiatives to help address the hooking issue.3 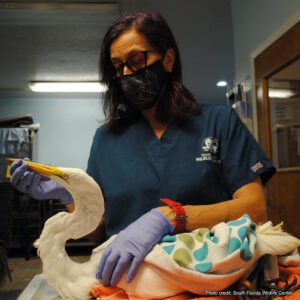 One such story started on August 23, 2019, when a young female, Brown Pelican, was admitted to the Center’s hospital. The pelican was emaciated and had a hook injury to her right wing, not an uncommon event at the Center. Dr. Antonia Gardner, the Center’s veterinarian, took over the care of this pelican along with Dr. Carolina Medina, a veterinarian that provided pro-bono services to the Center. This journey took nearly two years, including medical treatments and physical therapy.

After initial treatment, her wound appeared to be healing, but she was not regaining full movement in her wing. The team came together and drew up new treatment plans to address the complexity of her injury and her wing mobility issues. The physical therapy and laser treatments by Dr. Medina, both technologies provided by generous donors, proved essential to placing this pelican on the road to a full recovery. Over the next year and a half, the patient underwent many bandage changes and daily physical therapy until the Center’s veterinary and rehabilitation staff felt comfortable releasing her back to an independent life in the wild.

On April 14, 2021, Center staff transported this patient, nicknamed Medina, to Pelican Harbor Seabird Station (PHSS). Medina was released behind PHSS’s campus and flew to a rookery nearby to join other pelicans. The rescue, medical, rehabilitation, and release teams that had contributed to the effort collectively expressed a massive sigh of relief when Medina flew well and seemed to fit right in with her new friends.

The Medina story and its publicity likely influenced many more than the teams involved in the rescue and the patient’s subsequent care, rehabilitation, and release. Such efforts and stories reinforce an implicit value that caring for animals promotes the health of the animals involved, people, and the natural environment. As one observes Medina taking to the air, the majesty and magic of her flight are overwhelming. Who could watch such a spectacle and remain unmoved? Medina’s flight reinforces a sense of responsibility that we all have to nurture not just wild animals but the natural environment that sustains wildlife and, indeed, all of us!