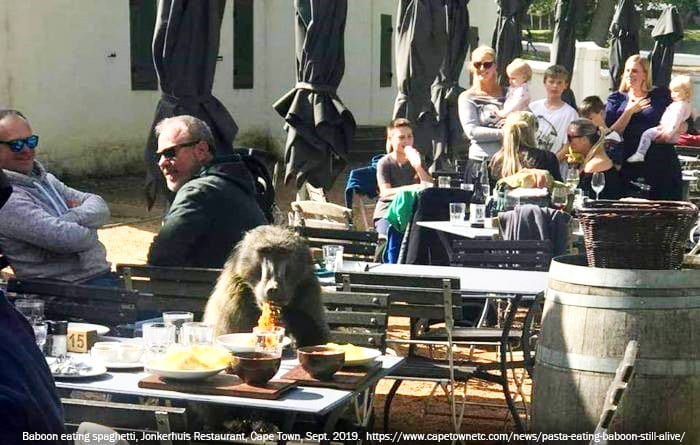 Posted at 07:42h By Andrew White
The world over, wild animals pose a challenge to humans, from elephants in the savannah to coyotes in suburbia. Greyton, a community of 11,000 people about 80 miles from Cape Town, is not exempt. Here we have our own set of problems shared by many villages and cities in Southern Africa.
People are increasingly struggling to ‘get along’ with the Chacma baboon. Tensions rise as the baboons move into human territory and start to enter and ransack homes. Once the baboons develop a taste for human food, they want more, and it always ends badly for the baboons because humans take action to defend their property—shooting and killing. Recently, a large male baboon jumped a “baboon-proof” fence to dine on spaghetti Bolognese at an outdoor restaurant near Cape Town before being chased back into the mountains.
Three years ago, at the height of a severe drought, the local baboon troop started to move into Greyton. This posed an immediate threat to pets, chickens, orchards and vegetable patches. Some people even worried about their young children because a baboon has lethal canine teeth and can even kill leopards.
We started to keep our doors and windows locked and when we went out, we worried about our pets left at home. In order to discourage invasions, residents on the edge of the nature reserve pulled out their orchards and allowed their vegetable gardens to go fallow. Bear (noise) bangers and whips sounded around town, further raising tensions.
We needed a solution. Everyone realized we either had to come up with a non-lethal strategy or shoot the entire troop because baboons are like humans—once they learn something, they do not forget it.
A local NGO visited our village and advised us that we did not have to start a war between humans and baboons. Local residents in the front line at the edge of the village gathered together to train and fund five local men to ‘guard’ the baboons.
Our field guides, as we call them, taught our baboons to keep their distance and we humans breathed a collective sigh of relief. Life returned to normal and baboons went back to living in the wild (the Greyton Nature Reserve and the surrounding mountains) because every time they tried to come into town to forage for food, they were gently but firmly moved out. They learned that Greyton is not their home; their home is in the reserve and the mountains.
Few of us acknowledge and appreciate how this state of affairs came to be. Many newcomers move into town and our current ‘normal’ existence unaware of the potential threat on the edge of the village. Sometimes a loud baboon ‘bark’ reminds us why we had to keep doors locked at all times and be fearful when a dog or child is out in the garden where baboon canine teeth could rip them apart.
If you do stop to think about our changed relationship with baboons, or walk to the field guides’ station, you will see the men out in the field with binoculars and radios always looking, and always ready to give baboons the signal that ‘this is our land, and that is your land.’ If you are familiar with baboon monitors in other parts of the country, you will pick up a subtle but real difference when looking at the field guides in Greyton
They do not have paint ball guns, nor bear bangers; the baboons are not collared and tagged. When baboons appear, there is no loud bang or the thud-thud of paintballs against rib cages. There is no hysteria and paramilitary adrenalin. In contrast, you will see the guides walking closer and the baboons backing off slowly. An alpha male will bark instructions as the baboons move off, knowing that they will not succeed today.
Every ‘conflict zone’ has its own set of circumstances so why Greyton can get away with a peaceful method cannot be verified for certain. However, we do know that violence has not ‘worked’ to prevent human-baboon conflict in any of the other communities we hear about. We do know we have nipped in the bud the habituation of our neighborhood baboon troop.
By the time we realized what would happen if we did not establish our full-time team of monitors, baboons had not yet rifled through our rubbish or entered our homes. They knew when the fruit, veggies and pecan nuts were ripe and would return annually when the food was ripe, but that was as far as we let them go. They still try, on occasion, to get into the village to forage, but are quickly moved back into the reserve. Over time, their attempts at entry are reducing in frequency and it seems that they are getting the message.
Meanwhile, here are two personal comments from Greyton’s human residents.
“One Tuesday morning I walked into my bedroom. A huge baboon leered at me, baring his teeth. He was enormous, reaching waist high. I screamed! Then I realized he was pulling faces at himself in the glass of the door, which was thankfully closed. Close call. After this, I was on edge every time I heard baboons around the house. Our field Guides have taken the anxiety out of my life.” Leslie Ives.
“I was very upset when three large baboons came into my young orchard and destroyed my apricot crop. I don’t mind sharing fruit, but they broke some of the trees badly. I also have a small dog, a Jack Russell, who chases anything. I was really afraid the baboons would hurt him. Now I can rest easy knowing the baboons may get some guavas or apples, but they won’t have time to ruin the trees.” Anonymous.
[Editor’s note: A wildfire around Greyton in December of this year resulted in the deaths of about one-third of the baboon troop as well as the death of livestock and the destruction of two farms.]
Print page