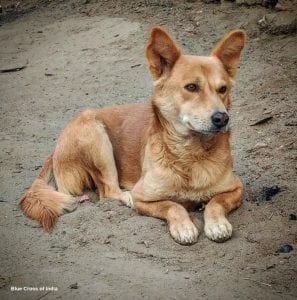 WellBeing International® (WBI) has launched a Global Dog Campaign (GDC) that aims to eliminate neglected and stressed street dogs across the world over the next twenty-five years. This target is achievable.  Success is based on reaching the following goals and objectives.

Ending dog homelessness is an achievable goal over the next two to three decades. This goal should require only a modest increase in resources over and above what is currently being devoted to the issue.  There are thousands of nonprofits from small local groups to large international organizations spending millions of dollars annually that are all working towards improved dog welfare.  One of the primary approaches being followed today is sterilization, usually associated with rabies vaccination.  But there are very few projects for which long-term data reporting and assessment are available so that impact can be determined.  There are guidance documents for implementing humane dog management programs but there are still very few short-term  and almost no long-term evaluations of what happens to the local dog population after a sterilization/vaccination program has been implemented.  Until recently, there were almost no surveys undertaken to collect basic dog population data needed to evaluate program impact 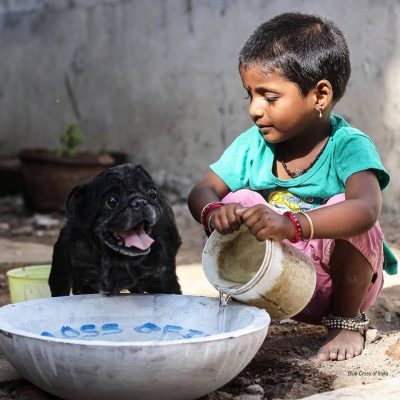 WBI has begun to establish a consortium of funders, global partners and implementing partners united behind improving the well-being of dogs overall and eliminating the hardships of homeless dogs.  The members of the consortium would commit to collecting pertinent and accurate data from projects around the world, providing data and reports for storage in WBI’s repository and database (accessible to all partners initially), and analyzing and reporting the results in standardized ways.  These analyses should enable implementing organizations around the world to improve the design and delivery of their dog management programs and to identify areas and communities needing urgent attention.

Many of the smaller implementing partners will lack access to expertise and appropriate technologies.  Therefore, WBI and the consortium will provide access to appropriate tools (e.g. simple surveys of street dog populations to track progress) and expertise to enable all partners to provide standardized reports of their projects.

In addressing dog welfare, most people and organizations focus on providing direct care to the dogs and to the communities in which they work.  This is a very necessary part of any project to address dog welfare, but the impact of such projects is rarely evaluated or reported in sufficient detail to understand what impact, if any they have delivered for dogs and humans.  Data collection and analysis is not particularly time intensive compared to direct care, but many organizations lack the skillsets or experience to generate such data and reports.  WBI proposes establishing a set of reports and easily deployed tools allowing all consortium implementing partners to provide data on project progress and the underlying costs of each project.  The data from these reports and others appearing in the published literature would be stored in WBI’s repositories and then used to produce consolidated annual reports tracking progress towards improved dog and human well-being in different communities and countries around the world.

As an incentive for partners to become participating partners, WBI will provide access to its global database, will provide support for reporting results, provide access to its analytical and reporting expertise, and access to mapping software. Depending on funding, WBI will also provide support for direct care.   Resources and appropriate tools on effective dog management will be provided to implementing partners via WBI’s website, and its Studies and Data repositories.  These resources will support an effective collaboration, learning and adaptation (CLA) experience for all partners.

Jaipur – Help in Suffering (HIS) launched its dog sterilization project in 1995 when the street dog population of Jaipur was estimated to be around 65,000.  They aimed to sterilize around 2,000 female dogs a year.  After a decade, the proportion of females that were sterilized had risen to 70% but the actual street dog population had changed relatively little.  But most importantly, the incidence of human rabies in the project area had fallen to zero (the incidence of human rabies had not changed outside the project area).  Over the twenty-five years that the project has been in existence, the number of street dogs has halved (while the human population has more than doubled) and the incidence of dog bites in the city has fallen by two-thirds.  An economic analysis found that the sterilization and vaccination program launched by HIS had been extraordinarily effective in terms of “return-on-investment.”

Costa Rica – The AHPPA shelter and veterinary clinic was established in 1991 but began reporting on its activities (animal intake and outcomes, veterinary care and sterilization number) in 2006.  Since that time, the number of animals adopted has grown steadily and the proportion euthanized has fallen below 10% of intake.  Street dogs have virtually disappeared from the streets of surrounding communities.  WBI recently helped AHPPA conduct a street dog survey and only 4 dogs were seen during travel along a 20-kilometer route in the communities around the shelter.  WBI also worked with AHPPA to conduct a household survey looking at dog ownership and dog care and found that dog care by households had improved substantially in the last twenty years.  The two maps below are a brief demonstration of the data on dog ownership collected in the survey.

There are many new tools available today that should increase the impact of humane dog management. As the two maps of Costa Rican dog ownership demonstrate, mapping dog ownership provides an attractive and simple way to illustrate human-dog interactions.  Surveys can be conducted in most countries and communities to produce accurate estimates of dog populations using new internet-powered survey approaches and the results can then be quickly mapped to direct humane dog management planning.  Local organizations can conduct simple street dog index surveys to provide a measure of how much impact they are having.  New, sophisticated mapping software is available that provides accurate estimates of human density in any country in the world.  These technologies can be used to map dog numbers by human density and improve estimates of dog populations in any community in the world.  These dog projections will help allocate resources to areas with the greatest need. WBI plans to make these tools and expertise available via the WBI Studies and Data Repositories so that any organization with access to a computer and the internet can make use of the data and analyses. 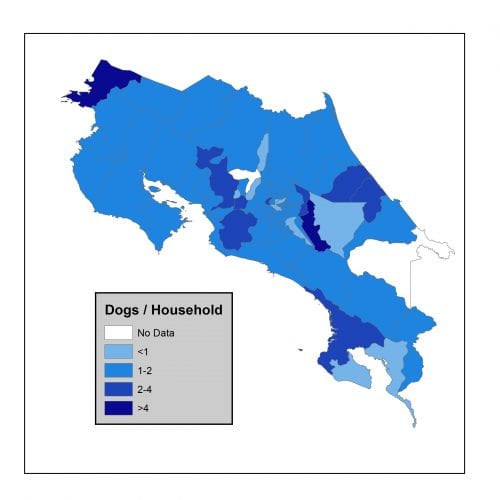 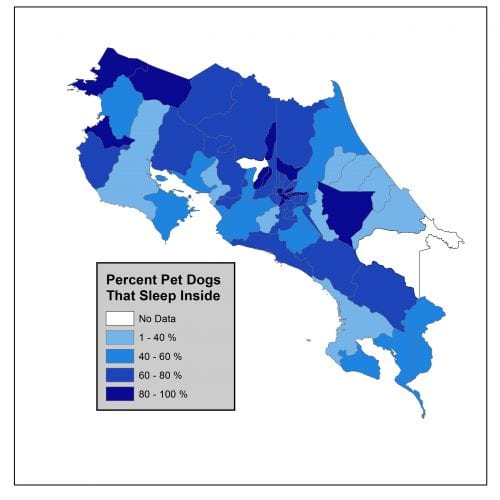