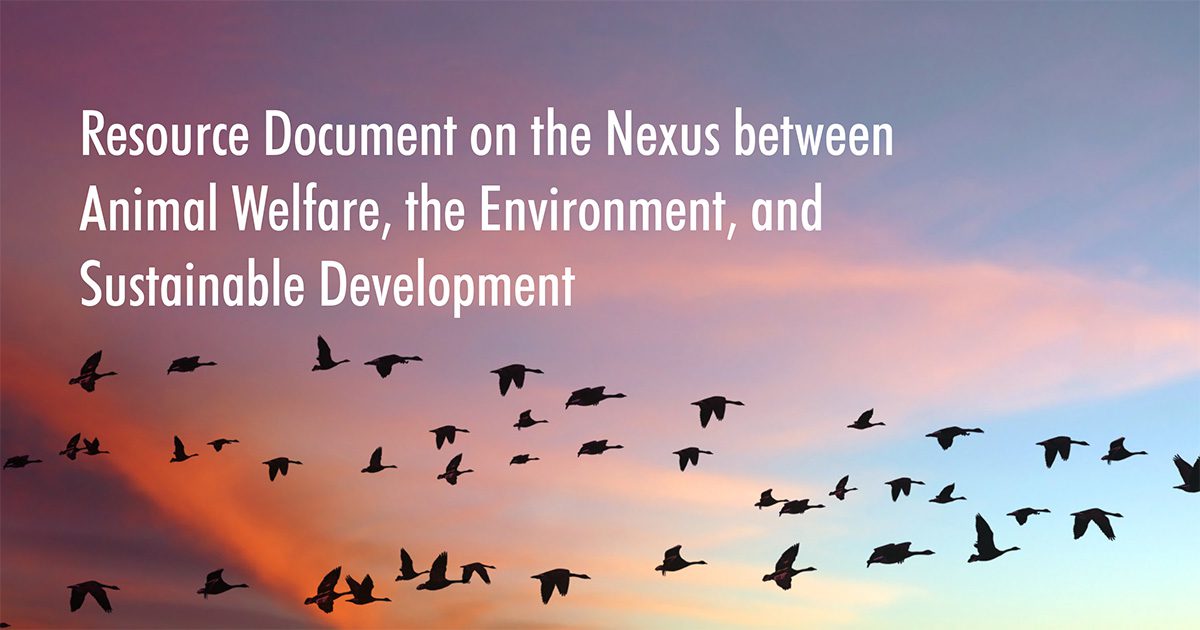 Progress following the Passage of the 2022 Animal Welfare, Environment and Sustainable Development Resolution at the UN Environment Assembly

In March of this year (2022), the UN Environment Assembly passed a Resolution (EA.5/Res.1) that requested the Executive Director of the UN Environment Program (UNEP) in Nairobi, Kenya, to produce a report on the Nexus (or links) between animal welfare, the environment, and sustainable development.  The passage of the WellBeing Nexus Resolution is a landmark event because, in WellBeing International’s opinion, it emphasizes the importance of a holistic approach to global health that addresses the well-being of people, animals, and the environment. The opening text of the Resolution (quoted in full below) emphasizes such interdependence.

“Taking note of the report of the Secretary-General on Harmony with Nature (A/75/266),1F

“Recalling that the environment and sustainable development are at the core of the mandate of the United Nations Environment Programme,

“Acknowledging that animal welfare can contribute to addressing environmental challenges, promoting the ‘One Health’ approach and achieving the Sustainable Development Goals,

“Noting that the health and welfare of animals, sustainable development and the Environment are connected to human health and well-being,

“Acknowledging the increasing need to address these connections through the One Health approach, among other holistic approaches,

“Acknowledging also that there is a strong body of science supporting animal welfare”.

However, the connections between animal welfare, environmental sustainability, and human health are not necessarily simple nor obvious, and that is why the drafters of the Resolution requested UNEP to produce a detailed report that explicitly identifies the interdependent links and the strength of the evidence supporting such links.

UNEP has extensive experience in producing in-depth, multi-disciplinary reports. For example, UNEP has produced six Global Environment Outlooks. The latest such Outlook, GEO-6, is a 745-page document comprising 25 chapters and ten annexes that included input from several hundred experts with support from ten funders and eight partners. In other words, the production of GEO-6 was a complicated and time-consuming project, taking fourteen months from launch to completion. Hence, the publication of a report on the Nexus between animal welfare, the environment, and sustainable development, complicated though it may be, is well within UNEP’s capabilities. But UNEP will need additional funding to support this project. UNEP estimates it will need $4.6 million plus in-kind support from some of its sister international governmental organizations (IGOs) to produce the Nexus report.

The UNEA Resolution acknowledges the need for such outside assistance and directs UNEP to work with its partner organizations to produce the requested report. UNEP is a member of the Quadripartite Alliance that includes the Food and Agriculture Organization (FAO), the World Health Organization (WHO), and the World Organization for Animal Health (WOAH). The Resolution also suggests consulting with the One Health High-Level Expert Panel (OHHLEP). In other words, the proposed report is expected to draw on many different institutions, covering a diverse and wide range of topics, and then identify the links between them as well as the causal relationships of those links.

While waiting for the launch of the UNEP-led process to produce the requested Nexus report, several organizations began to research the potential links between animal welfare, the environment, and sustainable development. For example, Janice Cox, a consultant to the World Federation for Animals (WFA), produced a 250-page draft exploring possible Nexus links. She identified many connections between animal welfare, the environment, and sustainable development. WellBeing International has joined this effort and recruited several academic experts in food animal welfare, wild animal welfare, one health, and environmental sustainability to review an abbreviated (but still 65 pages in length) Nexus Resources Document. The initial draft was revised due to input and suggestions from the university experts, Janice Cox of WFA and Arjan van Houwelingen of World Animal Protection. The current version of the Nexus Resources Document is now available in the Wellbeing International Studies Repository (a digital library open to anyone with access to the internet).

One of the features of this Resources document is a brief review of the various mentions of animal welfare by the UN and other IGOs. For example, the UN General Assembly launched a program titled “Harmony with Nature” in 2009 that requests the UN Secretary-General to produce an annual “Harmony with Nature” report. The 2020 version of this report includes an extensive review of various “Rights of Nature” developments worldwide. There are several other mentions of the importance of animal welfare by other IGOs, including the following excerpt from The Future is Now, a 2019 UN General Assembly report on progress towards the SDGs. On page 117, the report notes that animal welfare was an unanticipated issue when the 2030 sustainable development agenda was drawn up. The report states:-

“The clear links between human health and well-being and animal welfare is increasingly being recognized in ethics- and rights-based frameworks. Strong governance should safeguard the well-being of both wildlife and domesticated animals with rules on animal welfare embedded in transnational trade.”

It is somewhat surprising how many mentions of animal welfare and its importance are found in existing UN, and IGO reports.

WellBeing International plans to continue to add to the current Nexus Resources Document as new information is identified or published. Its new Special Nexus Repository “Exhibit” is available where interested persons can find the latest version of the Resources document and a range of supporting documents.

International institutions’ production of “nexus” reports is evolving into an established discipline in its own right. Such “nexus” reports usually aim to establish the links in complex systems (especially those involving environmental sustainability), to identify the directionality of those links (what conditions “cause” which outcomes), and to determine how strong the evidence supporting any specific link is. For example, the current WellBeing International Nexus Resources Document includes three appendices that address links. These links include animal welfare and climate change, human behaviors and biodiversity loss, and a discussion of the impact of external costs (such as pollution caused by manure from intensive agriculture facilities) on the available links.