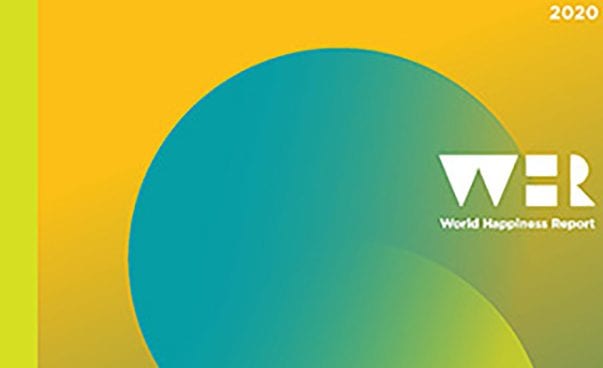 In February 2019, Wellbeing News carried an article discussing ideas relating to the state of well-being of People, Animals and the Environment. This article was followed by an item on the United Nations’ World Happiness Report in Tales of WellBeing. The World Happiness Report is issued annually in March, although this year, with the world struggling to deal with the COVID-19 pandemic, there has consequently been very little attention paid to the 2020 Happiness report or to the UN’s International Day of Happiness on March 20. In the midst of a disaster it is difficult to consider that there may be prospects for a silver lining, but there is always some potential for positive outcomes.

Viktor Frankl, the Viennese psychiatrist who wrote Man’s Search for Meaning (first published in German in 1946) after he had survived three horrendous years in Dachau and Auschwitz, argued that a person’s primary goal in life is a quest for meaning – not pleasure as Freud argued, nor power as Adler held. Frankl saw three possible sources for achieving a meaningful life: doing something significant in one’s work; engaging in loving relationships and caring for others; or showing courage during difficult times. What do the new studies in global happiness contribute to our understanding of human well-being?
Defining and measuring human well-being (beyond the relatively narrow measure of material wealth or growth in Gross Domestic Product) has only started to become a significant focus of public policy in the 21st Century following Bhutan’s 1998 initiative to measure the state of the country via a Gross National Happiness index. Other countries are now developing their own “national happiness” indices, and the first World Happiness Report, drawing extensively on Gallup’s World Poll data, was published in 2012. The 2020 World Happiness Report is the eighth in the series and the groups involved in producing it include centers at Columbia University, the London School of Economics, the University of British Columbia and Oxford University and the Gallup organization. 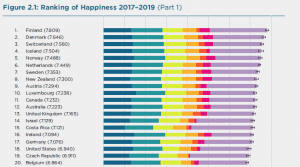 This year’s report looks at how global patterns of happiness are affected by a country’s social environment, whether a person lives in a city or the country, and the impact of the natural environment. Regarding the social environment, the report finds that the amount of trust in a country’s people and institutions is a very important factor in raising one’s level of well-being. The report suggests that high levels of such trust in the Nordic countries are a major factor in their position leading the globe in measured levels of happiness (The Table shown is extracted from the World Happiness Report, 2020).
The analysis of rural/urban differences in happiness found that urban communities were generally happier than rural communities, probably because of the increased economic opportunities found in cities. However, as the level of economic development in a country increases, one finds that people living in rural communities tend to be happier than those living in cities. But cities that combine high levels of income with high levels of trust and connectedness are less likely to see a decline in well-being as they become richer. In Canada, for instance, life evaluations are 0.18 points higher (on a 10-point scale) in rural neighborhoods than in urban ones but this gap is reduced in well-maintained cities.
Finally, the report looks at the impact of the natural environment through the lens of the United Nation’s Sustainable Development Goals (SDGs). It found that progress towards the SDGs was higher in countries with high life evaluations (i.e. where people were happier). The authors of the report suggest that people are “happier when they trust each other and their shared institutions, and care about the welfare of others. Such caring attitudes are then typically extended to cover those elsewhere in the world and in future generations.” This explanation also agrees with Frankl’s suggestion that caring for others is an important element to giving an individual’s life meaning. 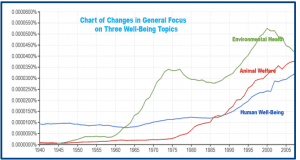 Google NGram Viewer Chart – Frequency of Terms in Millions of Books Scanned by Google. An nGram chart documents the frequency (by year) of specific terms appearing in the texts of millions of books that Google has scanned and digitized. These nGrams provide a rough sense of social interest and trends over time (at least in countries that speak English).

Amid the current gloom and doom, we hope people will be encouraged to know that, until COVID-19 shut down the globe, the planet was making significant progress towards improving human and domestic animal well-being. We still have a long way to go to address environmental health and well-being but, as the nGram plot below indicates, attention to the well-being of the environment in the PAE triad is also increasing.
Andrew N. Rowan, President, WellBeing International
Print page