Jul 21, 2021 Bear Bile Farms Are Being Phased Out in Vietnam

In the late 1970s, North Korea developed a “technology” for obtaining (“milking”) bile from live bears, and the “farming” of bears for their bile began in earnest in Asia over the following decade. At the time, it was argued that bear bile farms would also help conserve wild bear populations in Asia, but that has not been the case. Within a decade or two, there were thousands of bears held in cramped cages across Asia. Animals Asia was the first organization to draw the world’s attention to bear bile “farming” in the 1990s. They publicized the cramped cages and dreadful conditions in which bears were being held captive while their bile was collected. The subsequent international outcry led eventually to various steps to end bear bile “farming.” Today, the industry is gradually being phased out, thanks to the efforts of the Animals Asia and other animal advocacy groups. Those bears lucky enough to be rescued by Animals Asia live out their remaining lives in sanctuaries built by the organization.

The progress in Vietnam has been particularly noteworthy.  In 2005, Animals Asia persuaded the government to commit to phasing out bear “farming.” At its height, the Vietnamese bear bile farming industry held 4,349 bears, according to the Ministry of Agriculture and Rural Development. But there are now fewer than 1,250 bears held in such “farms,” according to a recent (2015) report.

On June 25, 2021, Animals Asia reported that the last three bile farm bears in Lang Son province in northeast Vietnam were rescued and headed for the Animals Asia sanctuary. The farmer was willing to give up the bears, but Animals Asia had only a few days to make the appropriate preparations. The lives of these three rescued bears, now named Hy vong (meaning hope), Tu’o’ong lai (meaning future), and Vui (meaning joy), are about to change dramatically as they are moved to the sanctuary. 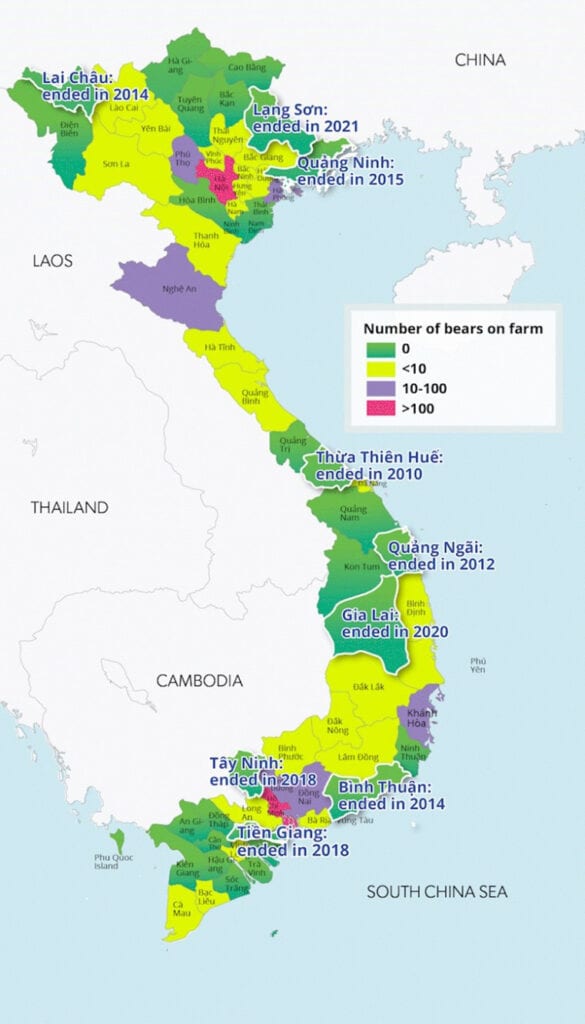 As part of its commitment to the Vietnamese government, Animals Asia will be constructing a second sanctuary in Vietnam to house the bears remaining in “farms” (estimated to number around 400 today). The map of Vietnam indicates the provinces (in green) that have no farmed bears as of today.  [Note: there are an estimated 900 bears in captivity in Vietnam but only around 400 on the bile “farms” according to Tuan Bendixsen of Animals Asia.]

Animals Asia’s success in its bear bile campaign in Vietnam has involved a great deal of hard work and an unwavering focus on the target – ending the horrors inflicted on bears in such bile “farms” once and for all. A long-term focus and commitment is a crucial feature of many successful animal well-being campaigns. Success is rarely achieved in less than a decade of sustained campaigning. In addition, Animals Asia has been willing to engage with the authorities and negotiate long-term solutions. The final goal – rescuing all the bears currently in bile “farms” is still ahead, but Animals Asia is around 90% of the way there.

The campaign to end bear bile farming has elements similar to those of the campaign against “dancing bears.” WellBeing International reported on the success of this campaign in South Asia in an earlier newsletter.