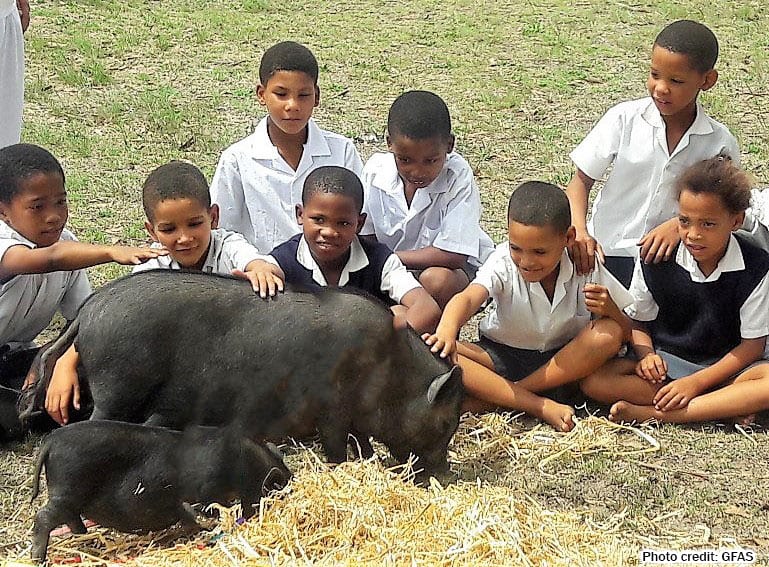 Today, we have a growing literature and considerable data on the link between animal abuse and abuse of humans but very little direct evidence that teaching and supporting humane education has had any impact on improving human-to-human interactions. In fact, in her 2001/2 Master’s degree project surveying US shelters (203 respondents – median annual budget of $200,000) on their humane education programs, Jaime Olin reported that 63% had a humane education budget of less than $1,000 and only 18% had budgets of more than $10,000. Not surprisingly, very little evaluation of the impact of humane education has ever been undertaken, and the few reports in the academic literature tend to focus on knowledge acquisition rather than behavior change.
Our Greyton partner (the Greyton Farm Animal Sanctuary) has been supporting a humane education project in the neighboring community of Genadendal. Genadendal boasts the oldest elementary school in South Africa, but the town has high rates of unemployment and a significant drug problem (with methamphetamine or “tic” as it is called in South Africa). It also has high rates of violence as assessed by annual crime statistics. Genadendal offers a tremendous opportunity to determine if an effective and intensive humane education program (starting in the elementary school but spreading to the high school and to the community at large) can change the rates of human-on-human violence (i.e. whether teaching children and their families to be kind to animals will lower the rates of violence). Such a change will likely take at least a decade to manifest itself in actual data, so this project will need to be maintained for ten years or longer.
Print page