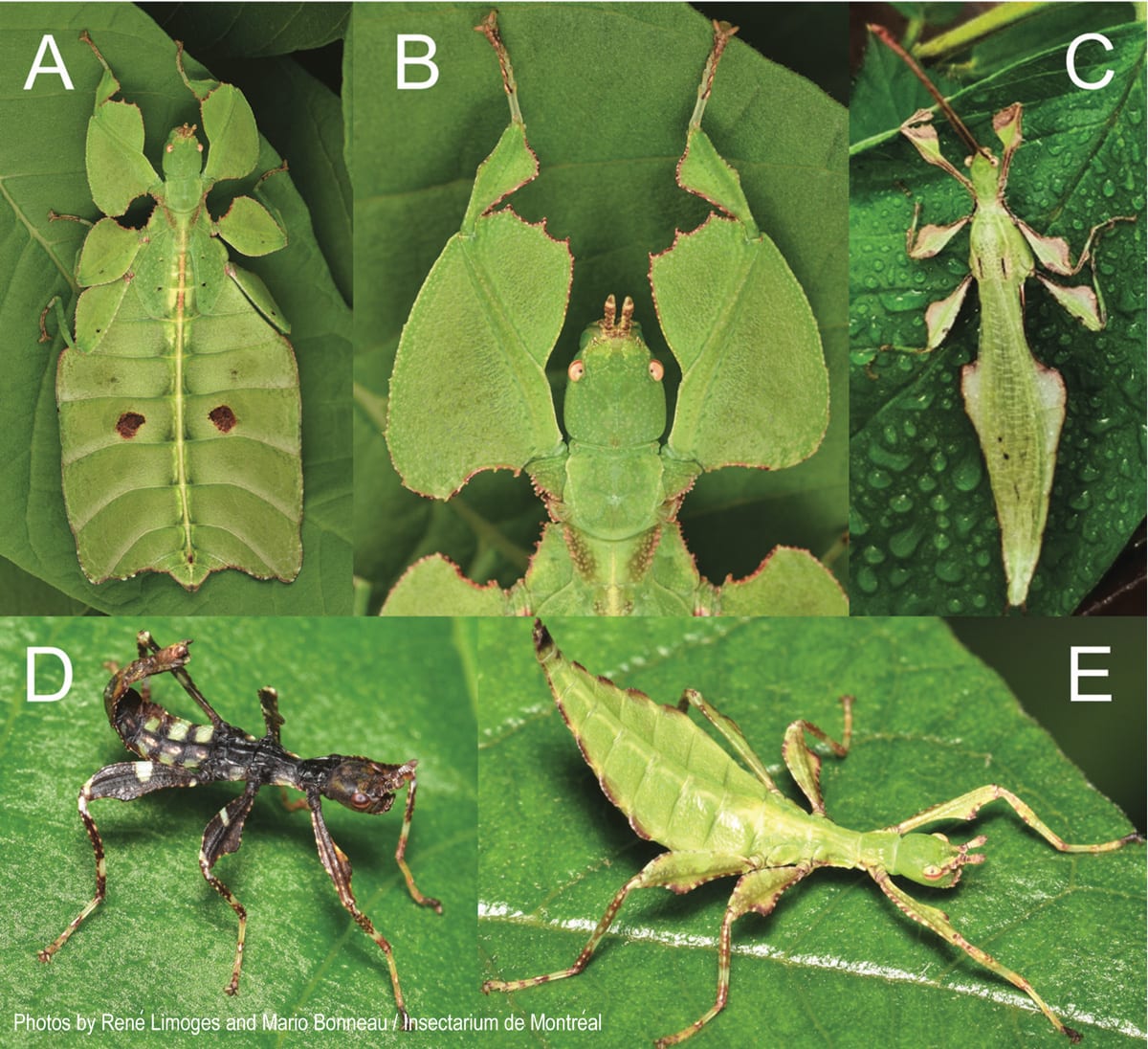 Feb 12, 2021 Unrequited Love among the Leaves! An Almost Valentine’s Tale?

Posted at 09:52h By Andrew Rowan and Kathleen Rowan

In these Covid times, Valentine’s Day celebrations are going to differ from those of past years. As opposed to a romantic meal in a restaurant, maybe a nature walk would be more appropriate. It is certain to be a healthier option as one of our commentators, psychologist Dr. Kazdin has indicated in an earlier article. So, for this Valentine excursion, imagine that you are taking a stroll (!) through the forests of Papua New Guinea and marvel at the beauty of the trees and the colors and textures of the leaves some of which may be  “leaf” insects.

There are many animals that are almost impossible to see in their natural habitat, with leaf insects and stick insects being masters of camouflage. The leaf insects (Family Phylliidae– found throughout Southeast Asia) are popular as pets and in insect collections because of their diverse shapes and coloring. Many species produce multiple color forms that allow them to look like leaves, whether alive, dying or dead. These creatures are the source of an insect Valentine’s Tale from the Montreal Insectarium.

Over the past 100 years, a group of small bodied Nanophyllium species found in New Guinea were known only from males. With a range of species described only through male forms, the question arose, “where are the female Nanophyllium?”  Early this century, several papers suggested that a frondosum-like species (Phyllium frondosum) could possibly be the unknown Nanophyllium female. As it turns out, museum specimens in this group were all females and a search through museum specimens of these two groups yielded no conclusive results.

Of course, this is only a mystery to humans. The leaf insects clearly mirror the doggerel verse composed by Roland James about the flea.

“And here’s the happy bounding flea –
You cannot tell the he from she,
The sexes look alike you see,
But she can tell and so can he!”

But this state of affairs changed in April 2018. The Montreal Insectarium received eggs from a Phyllium asekiense female collected in New Guinea. Three of the eggs survived through a very slowly developing nymphal stage and reached adulthood in 2019 to produce one female Phyllium asekiense and two male Nanophyllium! The Insectarium was able to match up the males and the females but were unable to breed a second generation because the males, who have shorter lives, matured into adulthood before the female and died before she became an adult. The female then lived for another nine months and produced a total of 245 eggs of many different colors. Unfortunately, the Insectarium and a number of partner organizations were unable to produce a second generation.

As with most things in life, another Valentine’s Day will arrive again next year and hopefully a second generation will be celebrated. Although a Valentine’s Day pairing did not occur, the successful matching up of these star-crossed lovers after a hundred years of confusion is a huge success for those studying the insect world!