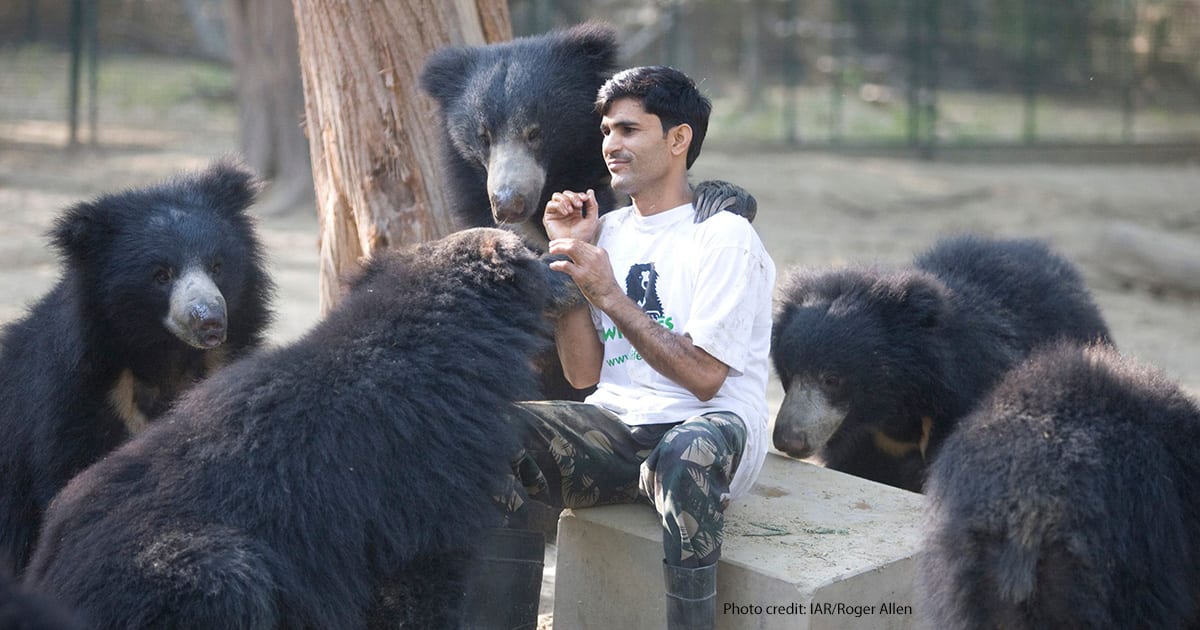 “Dancing” bears were a common and popular form of street entertainment in Europe and Asia in the Middle Ages.  Although there were still dancing bears in Western Europe in the 20th century (the 1911 UK animal protection law forbid the practice) but the dancing bear tradition was alive and well in South Asia at the end of the twentieth century and it continues in parts of Russia today. However, the practice has ended in South Asia thanks to the efforts of animal advocacy organizations, especially International Animal Rescue (IAR) in the UK and Wildlife SOS in India. 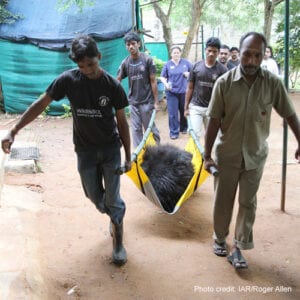 Needless to say, the process of training a “dancing” bear involved a great deal of animal suffering. Once trained, the bear would be controlled by a cord placed through a hole in its nose and upper palate of the mouth and, to reduce the chance of a bite, the teeth would be smashed. As a result, animal organizations have sought to halt the practice around the world.  In India, there may have been as many as 1,200 dancing bears at the end of the 20th century but, thanks to the efforts of IAR and Wildlife SOS, the last dancing bear was rescued in 2009 and placed in a sanctuary run by Wildlife SOS. The organization currently runs three sanctuaries for former dancing bears outside Agra, Bangalore and Bhopal with funding from IAR.

The campaign to end the practice of dancing bears involved working with the people who managed them – the Kalandars of India. The bears provided a livelihood for the Kalandars and their families and some alternative occupation had to be found.  IAR provided funds to compensate the Kalandars for their bears (50,000 Rs or around $800) and identified alternative occupations such as carpet weaving, bicycle repair and welding. Some of the former bear handlers were even employed at the sanctuaries, having first been re-educated and retrained in the humane treatment of animals. These men started by preparing food and cleaning the dens before graduating, if they showed promise and dedication, to caring for the bears themselves. Over the years, the keepers have come to know the individual bears well. They know their personalities and how each one prefers to spend his days – digging and playing with other bears for example, or in quiet solitude, dozing in the cool shade of a tree. Each bear is different, although all share the traumatic past of years “dancing” on the streets.

Once word spread among the Kalandar community that they could surrender their bears in exchange for a new way of life, the bear handlers were only too keen to give up their bears. As soon as the sanctuary in Agra was completed, the project began to gather momentum, with bears coming in at a rapid rate. Once the cruel ropes or rings in their noses had been removed, the bears’ wounds were treated and they were placed in quarantine for eight weeks. They were kept under close observation and tested for any contagious diseases. And once they had been given a clean bill of health by the veterinarian, new arrivals were ready to venture into the outdoor enclosures for their first taste of freedom.

In 2005 the campaign made a huge leap forwards with the creation of a second sanctuary in Bannerghatta safari park near Bangalore in southern India. Twenty-six sloth bears were already being kept there in appalling conditions. IAR and Wildlife SOS seized the opportunity to take over the care of the bears and build a new center to house more dancing bears. A third center – the Van Vihar Bear Rescue Facility in Bhopal, central India, followed in 2008.

On Christmas Eve 2009, the curtain finally fell on the practice of “dancing” bears in India when IAR and Wildlife SOS welcomed Raju, the last bear, into the Bannerghatta Bear Rescue Center.

Alan Knight, Chief Executive of IAR, observed: “Animal welfare successes such as this one are sadly all too rare – and that’s why this achievement is such a memorable and historic one. Thanks to all our supporters at IAR and Wildlife SOS, we have transformed the lives of hundreds of tormented bears and also enabled their Kalandar handlers to enjoy a better way of life. When I first saw a dancing bear on the road from Delhi to Agra, I was choked with sadness at the sight of it. Now I feel equally overcome with joy that the bears’ suffering is finally at an end.”

“Lis Key has two decades of experience with animal advocacy organizations.  After a stint at the International Fund for Animal Welfare, she joined International Animal Rescue in 2004 and is now their Media and Communications Manager.  She has visited the bear sanctuaries in India on several occasions and has seen first hand the loving care and attention the bears receive from their care takers at the Wildlife SOS sanctuaries.  She feels very privileged to be part of the IAR team and to be able to participate in their animal saving work around the world.”

Currently, the three sanctuaries are having a very difficult time because many sanctuary staff and their family members have been infected with Covid as the pandemic rages through India. Both IAR and Wildlife SOS need your support to address the needs of the humans helping to care for the bears. Andrew Rowan, President, WellBeing International.