For more than 200 years, children throughout the world have been learning moral lessons from stories heavily populated by both verbal and non-verbal animal characters. Whether we are talking about Peter Rabbit and Jemima Puddleduck from Beatrix Potter, Babar the Elephant from Jean de Brunhoff, Winnie the Pooh and his friends from AA Milne, or the wild animals of African folk tales, these characters have enthralled and educated children the world over. Nevertheless, when the first volume of Anthrozoos was launched in 1987 (the first scholarly journal publishing material on human-animal interactions), there were very few articles or books examining the place of animal characters in children’s literature. That gap in scholarship is not as large as it once was. In this brief note, I want to call attention to a few special examples of literature for young children that deliver messages of respect for animals and the environment. 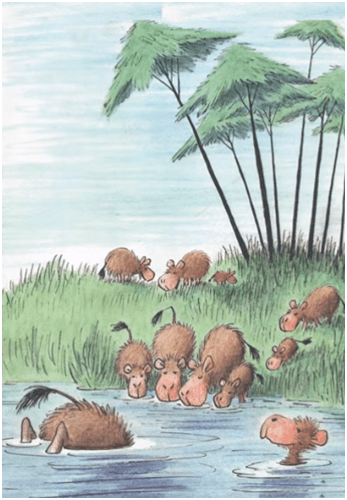 Wumps on Wump World before the Arrival of the Pollutants. (Illustration by Bill Peet)

One of my personal favorites is a Bill Peet book – The Wump World (1970). This book is a story about the virtual destruction of an idyllic world inhabited by the fictional Wumps. The Wump planet is discovered by the Pollutants (aliens who resemble humans in looks, manner, dress, and behavior) who soon cover the meadows with buildings and roads and pollute the lakes and rivers. Eventually, the world becomes so despoiled that the Pollutians depart for another (better) planet. The Wumps tentatively emerge from the underground caverns where they had taken refuge and start looking for a remnant of their world. Eventually, they find a small park that is not polluted or built over. In time, the buildings and roads start to crumble, and the last illustration shows a Wump observing a plant that has just sprouted through the concrete and tarmac.

This book is one of my favorites because the moral resonates with adults and children alike. If we do not treat our environment and animal life with care, the result will be an unlivable world. This book also ends on a message of hope that is important today with climate change scenarios—that if we give the environment a chance, we could recover some of what is lost.

The idea of the natural world as something that can bring great joy, rather than just material things is highlighted in Miss Rumphius, The Lupine Lady by Barbara Cooney published in 1982. As a small girl, Alice Rumphius would listen to her grandfather’s stories of faraway places and dream of traveling all over the world and then retiring to a place by the sea. 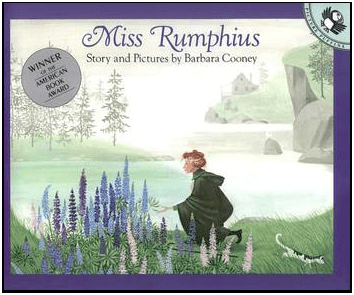 Her grandfather would always tell her that travel was all very well, but she must also accomplish another goal, namely, she must leave the world a more beautiful place. Miss Rumphius decided to spread lupine seeds, and in spring, the profusion of blossoms brightens the lives of those in her community. The story of Miss Rumphius was inspired by Hilda Hamlin, the real-life “Lupine Lady” who secretly spread lupine seeds along the coast of Maine.

Everybody will have their own favorites among the books they read to their children or had read to them as children. There is a timeless appeal to these books. From Aesop to the present, these stories have great potential to encourage children’s awareness about the well-being of people, animals, and the environment.

Recent research has indicated how important nature is for children and the development of healthy adults. The study found that children who grew up close to nature (whether a small city park or the countryside) had fewer mental health issues as adults compared to those whose surroundings were mostly built structures. Animal characters in books for young children will probably not replace exposure to real nature but they certainly bring a great deal of pleasure and expose children to important moral lessons.