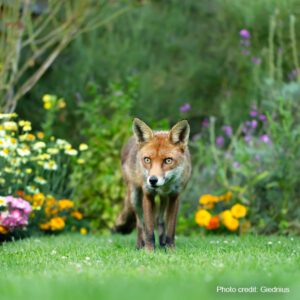 The development and application of wildlife fertility control programs likely have had a similar impact on how the public views wildlife. Traditionally, wildlife that causes a nuisance to, or a problem for, human communities has been managed using lethal means. If a population of animals is a problem, then reducing the population by shooting or poisoning them has been a fairly standard approach. However, in the past forty years, non-lethal approaches, exemplified by the new wildlife fertility control technologies, have begun to be implemented as a more humane alternative to the lethal control of so-called “nuisance” wild animals. Such non-lethal options have changed the discussion around how wildlife might best be managed.

For example, in one presentation at the Botstiber conference on the management of urban deer, the speaker reported the positive outcomes of using non-lethal management by the Borough of Staten Island in New York City to address urban deer problems, including the consumption of parkland vegetation and private shrubs, deer-vehicle collisions, and growing Lyme disease issues. According to numerous surveys, the public also prefers municipal support for non-lethal approaches in which wildlife are viewed as creatures deserving nurturance rather than killing. Such public preferences will likely change the direction of debates on wildlife management.

US state wildlife departments’ budgets depend significantly on hunting & fishing license income and equipment sales. These departments have typically been lukewarm (or more commonly openly hostile) to a fertility control management option for wild animals that have been traditionally hunted. But groups and individuals who oppose the new non-lethal wildlife management options face a serious challenge arising from the significant shifts in public attitudes from being predominantly utilitarian to predominantly mutualistic (people want to coexist in harmony with wild animals). In other words, the development of non-lethal management tools is empowered by (and also empowers) the current shift in public attitudes opposing lethal control options for wildlife.

The new non-lethal options for wildlife population control have taken time, effort, and money to develop. Drs. Irwin Liu (now an emeritus professor at UC Davis), Jay Kirkpatrick (deceased), John Turner (University of Toledo), John Grandy of the Pegasus Foundation, Priscilla Cohn, and Lowell Miller of the USDA were among the first scientists and academics promoting the need for effective wildlife contraception and then helped develop the technologies.

Research into the development of the new technologies also needed financial and in-kind support. For example, the US government provided early support to the USDA APHIS WS National Wildlife Research Center in Fort Collins, CO. Several animal protection organizations and some foundations, especially the Elinor Patterson Baker Trust, also provided early funding for wildlife contraception projects. The Botstiber Foundation is a relative newcomer to the field. Still, its support for conferences and field trials is now an important part of the changing debate on wildlife control techniques. Without such in-kind and financial aid, very little progress in developing the non-lethal technologies of wildlife fertility control showcased at the Colorado conference in May of 2022 would have been possible.

There were a few contrary voices at the Botstiber conference. One participant questioned the new approaches as being driven primarily by Western urban values and argued that indigenous communities needed to be involved to a much greater extent in debates over what to do about managing wild animals. Nonetheless, it should be noted that several Native-American nations have begun using fertility control agents to manage the wild horse populations on their lands.

The future promises a more harmonious relationship between people and animals because new technologies are now being developed. For example, invasive rodents (mice and rats) cause considerable damage to wildlife on islands. Traditionally, the only way to address such rodent invasions has been via the broadcasting of poison pellets across the landscape. There is a new rodent contraceptive that can be delivered via oral baiting. New “space-age” gene-drive approaches are now being explored that can eradicate invasive rodents with minimal impact on the immediate well-being of the invaders.

The development of non-lethal wildlife control has considerable direct and indirect potential to improve human and animal well-being in the coming years. For example, greater exposure to nature, including a more diverse array of wild animals, enhances human mental health. Non-lethal technologies to limit wildlife populations may take several years to produce positive outcomes (a substantial reduction in the number of urban deer). Still, they are usually strongly preferred by the general public to lethal approaches. And in some cases, lethal approaches are prohibited or strongly discouraged by law enforcement (e.g., on Staten Island) because the police do not want people shooting bullets or arrows across parkland in dense urban communities.

Developing new wild animal population controls that do not resort to poisons or shooting offers opportunities for more harmonious human-wildlife interactions in the future. These opportunities include people learning to enjoy the wildlife around them as enriching their environment rather than constantly seeking to kill or eradicate wild animals who are often viewed as being out-of-place intruders.

The History of Wildlife Fertility Control. The first international conference on wildlife fertility control was held in Philadelphia in 1987. Subsequent conferences have been organized at approximately 4-year intervals.