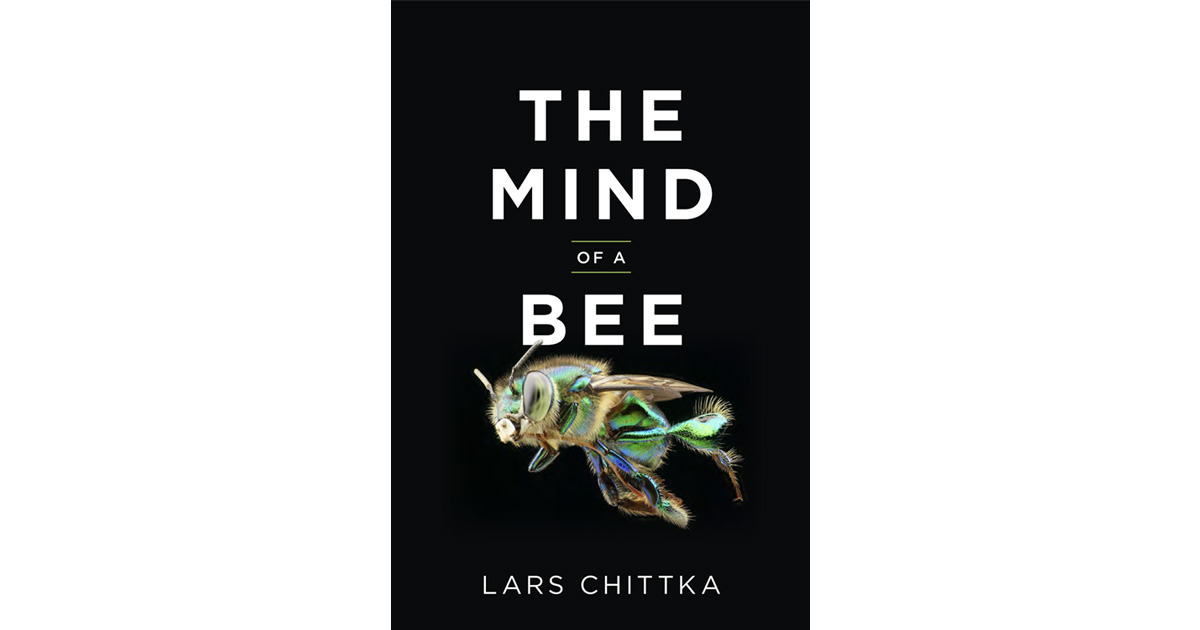 A journey into the alien mind of an insect

Bees were once thought to be cleverly designed biorobots that can construct elaborate comb architectures, have labor divisions, and nest climate control. But all this engineering and complex behavior was considered to be delivered by reflex machines governed entirely by innate behavior. However, new research shows that bees are profoundly intelligent creatures with individual personalities who can recognize flowers and human faces, count, use simple tools and learn by observing others. In my new book, The Mind of a Bee, I take you from an insect’s unique, strange sensory world to exploring their consciousness and the ethical implications if bees are most likely sentient. 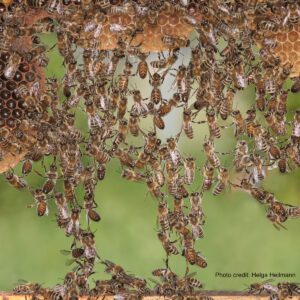 Construction of new comb in the honeybee Apis mellifera. The manufacture of hexagonal honeycombs requires the coordinated and cooperative activities of many dozens of individuals, and might involve planning abilities. | Photo credit: Helga Heilmann

When I began researching bee color vision as a budding scientist in the 1980s, I was fascinated to learn that bees lived in a rich sensory world that allows them to detect some physical aspects of the environment that escape humans, such as polarized and ultraviolet light. The world humans see and experience is not the entire, or the “real”, physical world. Humans, like other animals, sense only some aspects of the physical environment – the ones for which evolution has equipped us with the necessary sensors.

Earlier researchers had discovered that honeybee behavior is no less strange than some of the alien communication brought to life in movies. For example, bees communicate about food location using a complex symbolic code that is in some sense more strange than the language of the cephalopod aliens in the film “Arrival.” But few people thought bees were intelligent, let alone sentient. I had an inkling that this picture of “bee-hood” might be simplistic when I discovered during my Ph.D. research that bees were able to count landmarks. Progress forward around 30 years, and we are witnessing a new Copernican-style revolution. We realize that humans are not the only bearers of minds. Alien minds are all around us on our home planet, and yes, they include the minds of bees. The discoveries that led to this profound change in perspective are the subject of my new book.

Over the last few decades, we have learned that bees have number skills, pay attention, use tools (e.g., watch bees pulling on strings to reach nectar), recognize images of human faces, learn by observation, and may even be conscious. Recent discoveries include emotion-like states in bees and the existence of distinct “personalities” in which individual bees are defined not just by their genetic background but also by individual autobiographic memories that shape their behavior. Bee’s brains are unparalleled in the animal kingdom when one considers how much clever computation can be packed into such a speck of nervous tissue.

One unique feature of the book includes a closer look at the remarkable historical personalities that have paved the way to our journey into an insect mind. Blind Swiss scholar Francois Huber reported at the turn of the 18th/19th century the possibility of bee planning abilities in honeycomb construction, as well as interindividual “personality” variation by which he sought to explain the division of labor in a bee colony. Another inspiring story is that of African-American scientist Charles Turner (1867-1923), who performed pioneering experiments on the psychology of bees and other insects while working against impossible odds as a high school teacher, and without access to scientific laboratories or libraries. We will also encounter Karl von Frisch, whose work was constantly threatened by the Nazis. However, he managed to survive this dark period and received the Nobel prize for his discovery of the bee dance language. He also founded a large school of experimental bee scientists (of which I am a 4th “generation” member). I would love the opportunity to travel in a time machine to meet and speak to these early pioneers and tell them of the recent discoveries for which their work paved the way. Would they be blasé or surprised and incredulous?

Discoveries about bee intelligence have wide-ranging implications for understanding intelligence in animals more generally, its evolution, and its neural-computational architecture. The cognitive abilities of bees call into question the notion that large brains are required for intelligent behavior and open future avenues of research exploring the neural hardware mediating intelligence in relatively small nervous systems. Insect brains are much smaller than the brains of typical vertebrates, having several orders of magnitude fewer nerve cells than we do. Understanding insect brains could lead to crisp mechanistic explanations for relatively complex behavior. Recent neurobiological research, and our modeling based on this work, have shown that relatively advanced cognitive capacities naturally emerge from tiny nervous circuits. Indeed, we have yet to identify a single, significant cognitive task that requires a big brain. Then why are big brains even necessary? A possible answer might be that big brains do not mediate higher intelligence – but provide more memory storage space (equivalent to a bigger hard drive) rather than more complex or faster computations (equivalent to a better processor). The microcomputer that is the bee brain thus offers potential for designing very efficient and elegant systems for bio-inspired information processing in real computers.

Finally, the fact that bees are most likely sentient beings has important ethical implications for their conservation. Many people know that wild bees are in trouble because of wide-scale habitat loss, overuse of insecticides, and new disease threats. These threats spell trouble for humans because we need bees to pollinate crops and garden flowers. But is utility for humans the only reason bees should be protected? I think not.

The insight that bees have a rich inner world and unique perception and, like us, can think, experience joy, and suffer negative experiences demands broader respect for the diversity of minds in the natural world. We should protect the environments that shaped these other minds. Their conservation should be as much of a priority as that of orangutans or Siberian tigers. The average human may feel they can do little to reduce the threats to charismatic mammalian species. However, anyone with access to a simple balcony flower box can help bees by planting the type of flowers large-scale industrial agriculture is wiping out.

The book’s final chapter is thus dedicated to generating a sense of empowerment – that by understanding a bee’s psychology, one can predict its ecological needs – and therefore work together to benefit their conservation.

Lars Chittka is a German zoologist, ethologist, and ecologist who is a Professor of Sensory and Behavioural Ecology at Queen Mary College of the University of London. He is also the founder of the Research Centre for Psychology at Queen Mary. He is known for his work on the evolution of sensory systems and cognition using insect-flower interactions as a model system. Dr. Chittka has made fundamental contributions to understanding animal cognition and its impact on evolutionary fitness by studying bumblebees and honeybees. “The Mind of a Bee” will be published by the Princeton University Press on July 19, 2022 (UK)and July 26, 2022 (US).