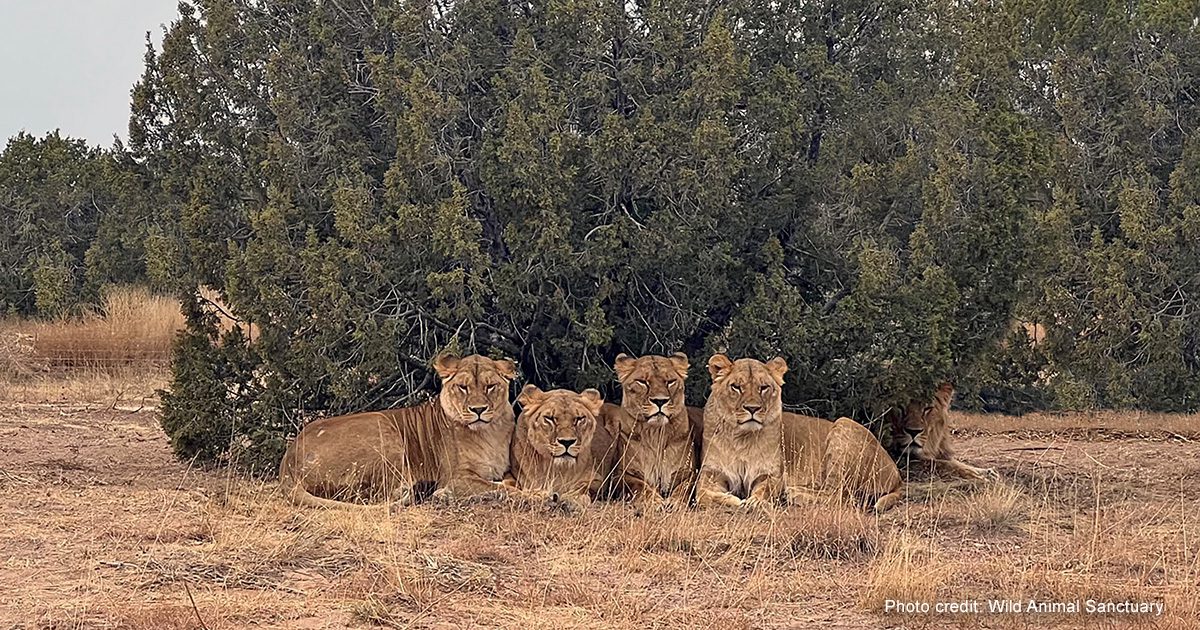 Posted at 15:54h By Kathleen Rowan and Andrew Rowan

Many African cultures believe it takes a community to raise a child. It also takes a community of people, organizations, and supporters to rescue eleven lions from Ukraine and bring them to their forever homes for the holidays. The end-of-year holidays are traditionally a time to reconnect with family. Thus, it seems appropriate to end the year by telling the story of the long journey home to forever sanctuaries in the USA and South Africa for eleven lions in time for the holiday season. 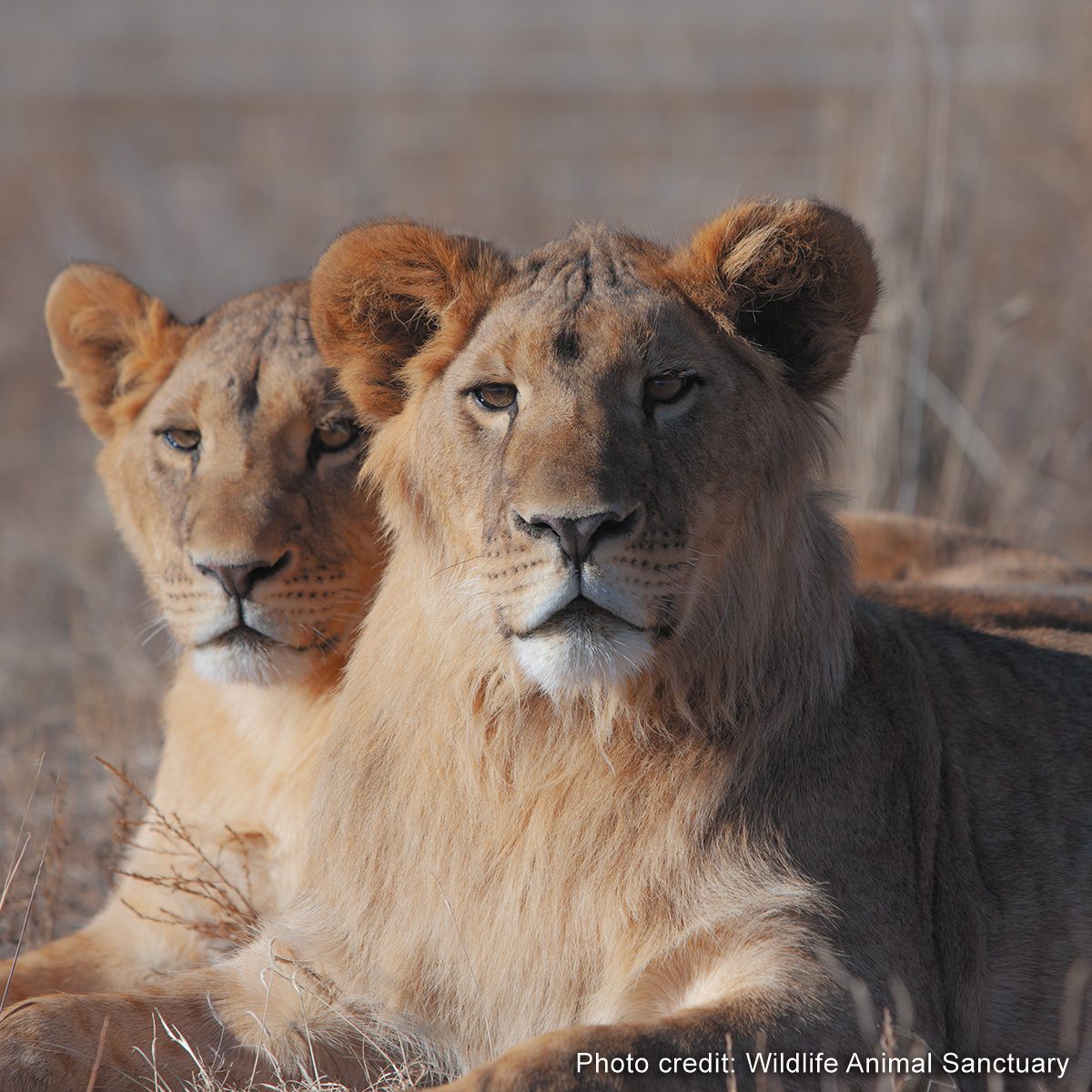 It is no simple matter to move large predators around the world. The journey these eleven lions (nine adults and two cubs) undertook called on the diverse experiences, logistic and coordination skills, and resources of numerous individuals, organizations, and corporations. The discussions over the need to move the lions began in the first quarter of 2022 when the owner of Biopark Odesa (the city zoo) approached Lionel de Lange of Warriors of Wildlife (WOW) about the need to move their nine lions. With the city under constant threat of attacks by the Russians, the Biopark Odesa was no longer a safe place for the lions. De Lange agreed to help and thus began the mobilization of many others to accomplish the long journey home for these lions.

De Lange had been living in Ukraine since 2014 and had already rescued numerous wild animals from problem situations in Ukraine, particularly dangerous predators such as bears, wolves, and big cats. He had founded the non-profit, Warriors of Wildlife (WOW) that supported these rescues.

The first task was to find a temporary home for the lions outside Ukraine while forever sanctuary homes and the required travel and country entry permits were obtained. Although several possible temporary locations were identified, most were already at maximum capacity and could not take the lions. Fortunately, the Targu Mures zoo in Romania had space and agreed to take the lions but could only provide a waystation for four months. Tick Tock.

The actual physical move began at the end of May 2022. The transport team included a group of British army veterans, Gemma Campling, a veterinarian from Worldwide Vets, and de Lange. On May 31, the lions were readied for the journey by Gemma Campling. They were sedated and given health checks and vaccinations before being placed into crates and loaded onto three vehicles, a Ford van, an ex-military truck, and a converted ambulance.

The initial plan was to take the lions across the Ukrainian/Romanian border, but the Russians destroyed the main bridge across the Danube River that separated the two countries. The alternative route took the lions on a lengthy detour through Moldova, a country sandwiched between Ukraine and Romania. The additional miles also meant that new paperwork was required for the authorities in Moldova. After a three-day journey from Odesa, the lions arrived safely at their temporary home, the Targu Mures zoo. The rescue operation now had four months to prepare for the next leg of the journey. Tick Tock.

While the lions were at the Targu Mures zoo, two additional lions, also rescued from Ukraine and housed in Romania, were added to the sanctuary waitlist. With the assistance of Tigers in America (TIA – a Ukraine Rescue, Relief & Rebuild consortium partner), the Global Federation of Animal Sanctuaries (GFAS), and Warriors of Wildlife (WOW), two sanctuaries were identified who agreed to accept the lions. The Wild Animal Sanctuary in Keenesburg, Colorado, USA, would welcome nine lions, and the Simbonga Game Reserve & Warriors of Wildlife Sanctuary (hereafter Warriors of Wildlife Sanctuary) in Jeffreys Bay, South Africa, agreed to take two lions. Once the forever homes had been identified, the lion rescue community (now including the two sanctuaries) began working on obtaining appropriate import licenses and permits for each country. Tick Tock

Obtaining such licenses and permits can take a long time, sometimes as much as a year. Therefore, meeting the four-month deadline set by the Targu Mures zoo was a challenge. The US Fish & Wildlife Service is responsible for granting permission to import wild animals into America. The Wild Animal Sanctuary immediately launched the permit application process, while TIA, who had just received permission to bring two lions from Canada into the US, helped to facilitate the rapid approval of The Wild Animal Sanctuary application. Tick Tock

Obtaining the permits and licenses for travel through Doha, Qatar, to South Africa and the USA was not the only time challenge. Special travel crates had to be built for the lions to meet the International Air Transport Association (IATA) standards. Tick Tock

The lions were placed in their travel crates, transported to Bucharest, and then loaded onto a Qatar Airways flight leaving on September 27 to Doha, Qatar. After the 4.5-hour flight to Doha, the lions were separated. Nine lions were loaded onto a Qatar Airways flight to Dallas, Texas, while the remaining two were loaded onto a Qatar Airways flight to South Africa. Both flights took approximately 17 hours. The Wild Animal Sanctuary staff met the lions arriving in Dallas, Texas, providing a “door to sanctuary door” coach service to their final Colorado destination. This last leg of the trip lasted eight hours. The two lions flown to Johannesburg, South Africa, were also provided coach service to their new home at Warriors of Wildlife Sanctuary at Jeffreys Bay, but their final leg took 15 hours.

According to The Wild Animal Sanctuary, the seven adults from the Biopark Odesa (three males and four females) were safely placed in their enclosures at the refuge near Springfield in Colorado and are thriving after an initial acclimation period. The two cubs could not be housed with the adults and were placed in the Keenesburg facility with Beatrice, a rescued female liger (produced by mating a male lion with a female tiger). Beatrice displayed typical female lion behavior and quickly accepted the two cubs solving the problem of what to do with them. According to the latest reports from The Wild Animal Sanctuary, all the lions from Ukraine are doing very well. The Sanctuary currently cares for more than 600 lions, tigers, bears, and wolves in three facilities in Texas and Colorado, covering more than 11,000 acres in total. 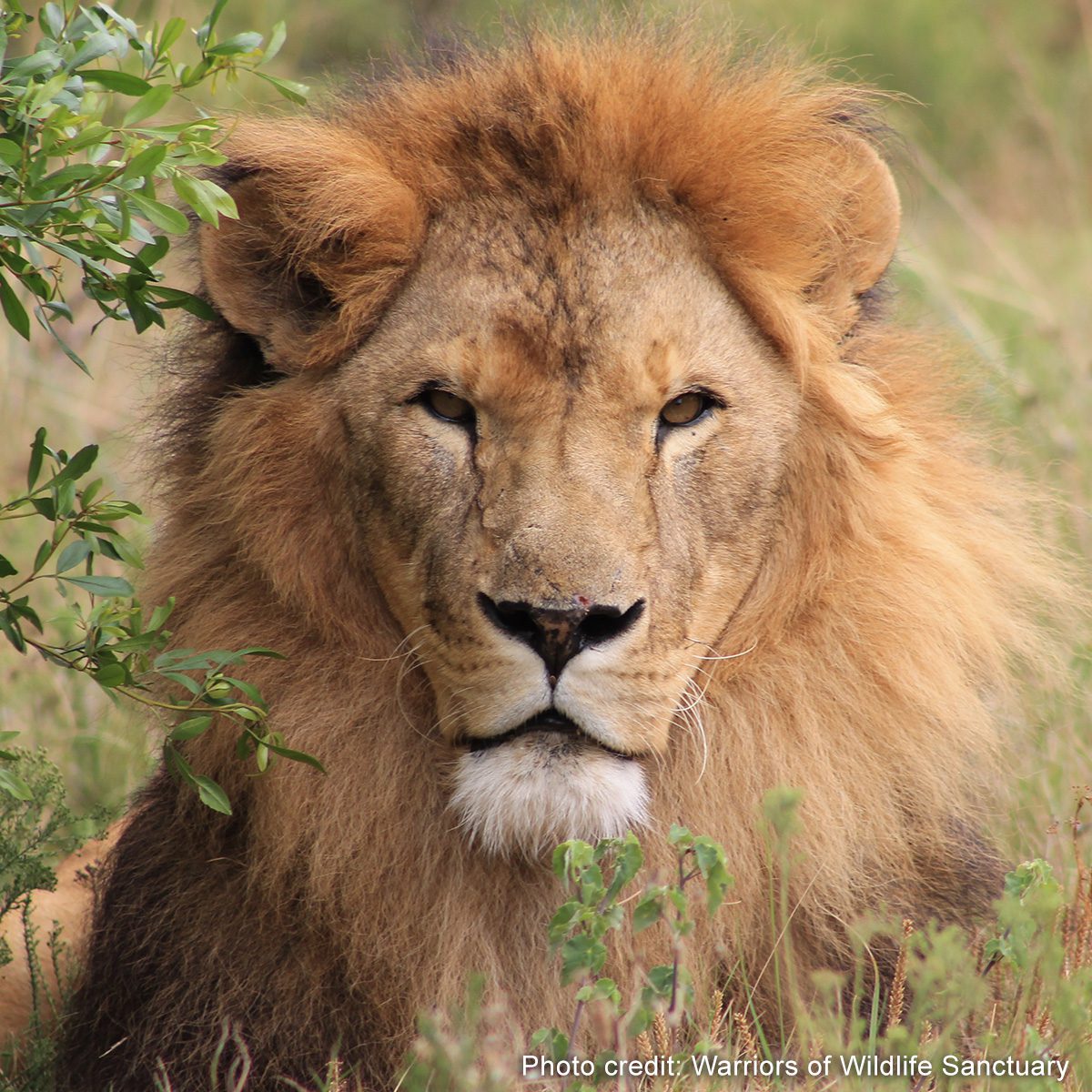 Simba, one of the rescued lions, in South Africa | Photo credit: Warriors of Wildlife Sanctuary

The two lions (Simba and Mir) going to the Warriors of Wildlife Sanctuary in Jeffreys Bay arrived at 2.30 am on September 29. According to Lauren Vad-Smith, the Sanctuary Manager, they have acclimated very well to their new environment. Both lions were met with an incredible roar-fest greeting from the other lions when the sun rose on September 29. Mir was the first to emerge from his night shelter. He was initially confused by the tree branches moving when he moved, but he soon relaxed and started “sunbathing” and taking in his new surroundings. Simba had to wait for his night shelter to be opened because a swarm of bees had moved into his enclosure overnight. When the gate was finally opened in the early afternoon, Simba quickly retreated back into the familiarity of his night shelter. It was a little over six weeks before he felt confident enough to explore his enclosure and nap outside in the sun.

The above describes the considerable challenge of moving large and dangerous wild animals across the world. This rescue required the expertise and experience of multiple organizations and their contacts. In addition, funding was obtained from numerous donors, without whose support the rescue would not have happened. Given that lions are mostly an African species, it seems appropriate to end with the African proverb – “If you want to go fast, go alone; if you want to go far, go together.”

Our best wishes to the lions who endured an incredible journey. Welcome Home for the Holidays!