Posted at 10:05h By Don Pinnock and Colin Bell

This is the (briefly mentioned) and depressing backdrop to a beautiful volume on elephants organized by authors Don Pinnock (who has written extensively in the general media on wildlife issues) and Colin Bell (the owner of a wildlife tour company that was established, in part, to return value to the communities where the company operated among some of the most stunning wild places in Africa).
The book is a compilation of chapters starting with a description of the Great Elephant Census (published in 2016) that concluded that there were approximately 380,000 savannah elephants in the 18 countries known to have elephant populations. Over 80% of these elephants were in protected areas but, even there, the elephants were not safe. There were large numbers of carcasses in these areas which the census-takers concluded was leading to an estimated 8% per annum decline in elephant populations (primarily from poaching).
If one simply charts elephant and human numbers in Africa over time (the earlier estimates of the total numbers of elephants in Africa are very speculative), one obtains the graph below. This chart implies that there will likely be no more than 105,000 elephants in Africa by 2050 even if poaching can be controlled. 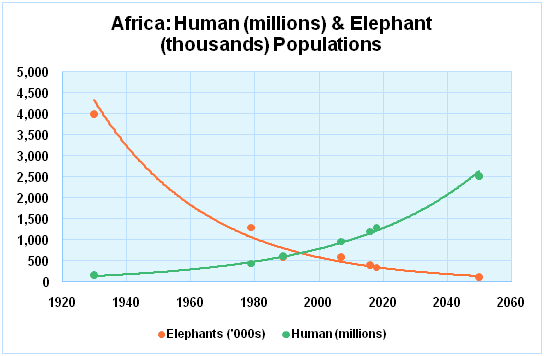 This depressing extrapolation notwithstanding, there are encouraging (and inspiring) contributions in this volume detailing success stories where elephants and humans are sustainably sharing landscapes, where some protected areas are being successful at preserving wild Africa and its animal citizens, as well as remarkable stories of human-animal connections. The volume also benefits from the efforts of numerous wildlife photographers and is full of stunning images of the African bush.
Nevertheless, the precariousness of the African elephant is illustrated by the fact that only two countries (Botswana and Zimbabwe) contain 60% of the elephants counted in the recent census. Tanzania (which had the third-largest number of elephants at 43,000) lost 60,000 elephants in just five years from 2009-2014 and continues to lose elephants to poachers. Botswana is now revisiting its recent ban on hunting and it is by no means clear what the new government approach to wildlife management will mean for the largest elephant population in the world.
So, while the book has plenty to inspire, it also has more than enough depressing news. The two editors/authors hope that the book will prompt a positive result at the next CITES meeting in Sri Lanka and that elephants will be placed in Appendix One (no trade-in elephants or elephant parts). But the chapter in the book on how CITES operates does not leave the reader with much hope that any action taken by CITES at its next meeting will do much to stop the pressure on Africa’s elephants. Instead, we need a global change in attitude against any legal and routine killing of large mammals (how does one explain to a local community that they cannot kill a problem elephant when rich tourists have no such restrictions?). There are stories and arguments in this book that indicate how such an attitude change leading to real changes in human behavior might occur.
The Last Elephants (2019) by Don Pinnock & Colin Bell, Penguin Random House South Africa; Cape Town.
Print page