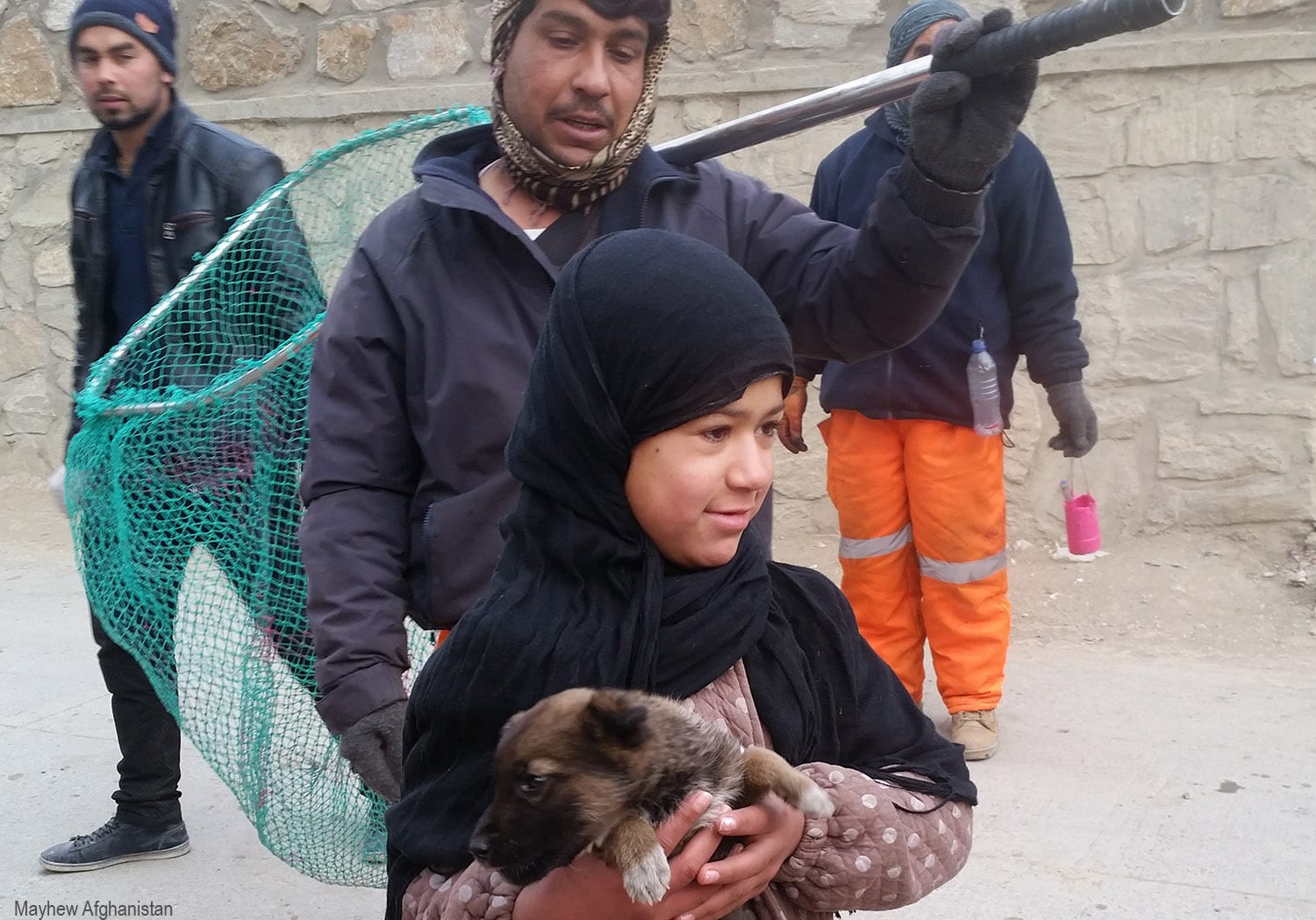 WellBeing International is reaching out to engage with and support organizations that are implementing humane dog management projects around the globe. One of these is the Kabul Dog Project in Afghanistan that is run by Mayhew Afghanistan, a division of the Mayhew Home for Animals in North London for whom one of us works as their head veterinarian. Mayhew has been working to help companion animals abroad since 2001 in Russia, India, Georgia, Nepal and Afghanistan. The Afghanistan project began in 2002 in response to an appeal to help the animals in the Kabul Zoo. Building on these foundations, Mayhew Afghanistan is now working with the Kabul Municipality to address the issue of street dogs in Kabul and, in so doing, also reduce the threats of rabies and dog bites to humans.

The Mayhew started the Kabul project (after extensive discussions with municipal authorities) in 2015 by conducting a survey of the dog population over February and March of 2015. They surveyed 16 urban districts (some of the outlying districts were not included because of safety concerns and logistical issues). The survey team estimated there were 9,625 observable street dogs in these 16 districts which translates to a total of around 27,000 street dogs in the city1. Kabul thus would have around 7.5-8.0 street dogs per 1,000 people. This is a relatively low dog population, but it does not include owned dogs.

There were a number of logistical challenges that had to be overcome before launching the vaccination campaign. The Mayhew had to train a team of dog catchers/vaccinators (selected from among the municipal employees who had been engaged in the dog control program) to catch and handle the dogs humanely and they had to raise the funds to launch the project. Humane Society International offered to train a core group of the dog catchers and the Mayhew negotiated with the Kabul Municipality to stop the culling of dogs early in 2017. (The Municipality had been culling/poisoning approximately 15,500 street dogs a year from 2008.) The project was officially launched in August 2017. Over the rest of 2017 and through 2018, the team vaccinated a total of 23,240 dogs! There were approximately twice as many males as females and around one-quarter of the dogs were puppies (similar to the proportion observed in the survey). Owners also brought their own dogs to be vaccinated. In part two, a further 7,070 street dogs have been vaccinated as of the end of March 2019, bringing the total number of street dogs treated to 23,866 or over 85% of the estimated total (see table below). It is still too early to claim a complete success but here are some anecdotes that are most encouraging.

Despite the Municipality stopping the cull of street dogs early in 2017, a second survey in May of 2018 found that the street dog population had not increased. In 2015, there were an estimated 7.8 street dogs per 1,000 residents and in 2018, there are an estimated 7.7 (i.e. there has been no change in relative street dog numbers)2. In 2017, there were 3 human deaths in Kabul attributed to rabies but in 2018, there were none. Members of the dog-catching team have gone from being verbally abused by Kabul residents (because they used to poison and kill the street dogs) to being welcomed ambassadors for the new program. They now have pride in their work and two of the team have adopted dogs that they caught on the streets. Children have begun to tell members of the team where they can find litters of puppies. Finally, the Ministry of Agriculture, Irrigation and Livestock (MAIL) asked the Mayhew team to help with a rabies outbreak in southern Afghanistan and MAIL has now also signed the MoU between Mayhew Afghanistan and the Kabul Municipality (making it a three-way agreement).

Mayhew has recently obtained access to a new veterinary clinic at Kabul University and plans to launch the sterilization part of the project. As has been demonstrated in other communities, sterilization of street dogs leads to improvements in the health of the dogs but also appears to improve the human-dog relationship.

Footnotes.
1.   When people count street dogs, even in the early daylight hours when the dogs are most active, they will observe only a percentage of the total number of dogs at any one time. The others will be resting out of sight. Typically, the surveyors will see from 30-50% of the total population of street dogs. Therefore, if one wants to produce an estimate of the total number of street dogs, one has to multiply the number actually seen by a factor of two (50% detectability) to three (33% detectability). In an urban environment in Kabul, it is likely that detectability will be lower, therefore, we have multiplied by 3 to produce an estimate of the total population of street dogs. 2.   Dogs are almost always found in close proximity to humans, whether owned or not. The number of dogs relative to humans in any community, region or country, appears to stay more or less the same even as the human population increases. For example, in the USA, the UK, and Sweden, where dog populations have been tracked over the past forty years, there are approximately 240, 140 and 70 dogs per 1,000 humans respectively and those numbers have stayed the same since 1980. In Kabul, the number of street dogs per 1,000 people is 7.7 to 7.8 and there appear to be another 2 owned dogs per 1,000. Therefore, Kabul likely has around 10 dogs per 1,000 people. This is much lower than the populations in Europe and North America and lower than the dog population in India (which is around 50-100 per 1,000 people).
Print page