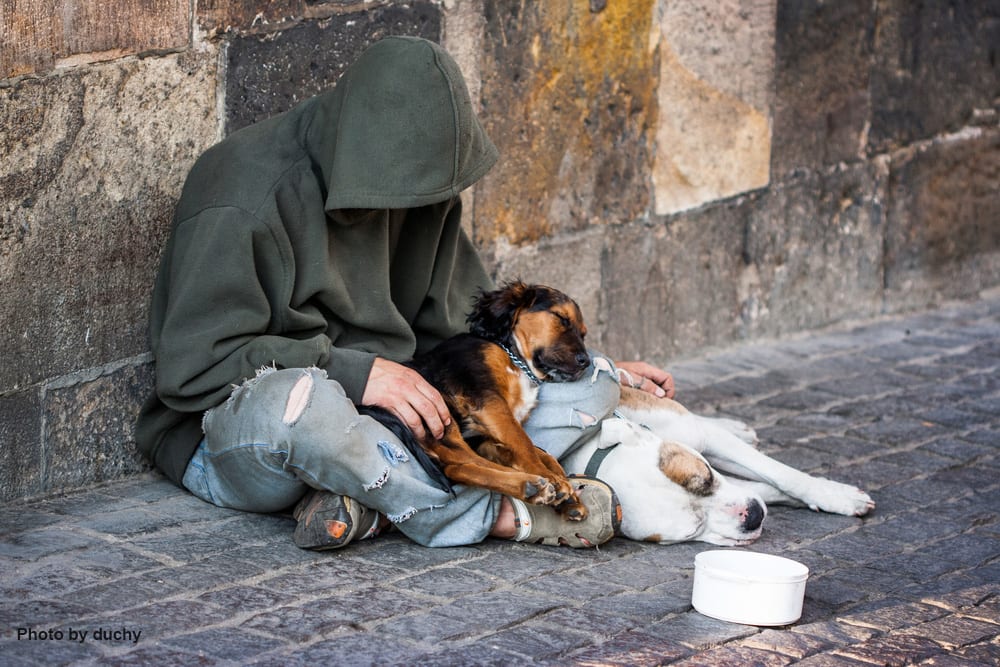 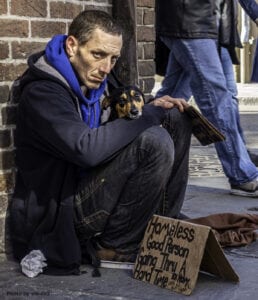 Pets provide constant companionship, emotional support and security for individuals who are homeless. It is estimated that approximately 10% of the homeless have one or more pets. Thirty or more years ago, it was commonly argued by animal advocates that, if a person cannot take care of themselves, how could they provide properly for their pets. It is true that there are challenges for homeless people who have pets. In particular, few homeless shelters will allow a person to bring a pet with them. It may also be difficult to find enough food for oneself let alone for one or more pets. However, despite past criticism of the homeless having pets by animal advocates, efforts to support the pets of the homeless are increasing.

In America, estimates of the homeless population vary from around 550,000 to 3.5 million.  Therefore, there are probably somewhere between 70,000 and 500,000 pets living with their humans on the streets. Over the past twenty years, the number of individuals and organizations seeking to help the pets of the homeless has grown. There are now numerous veterinary initiatives, both in North America and the UK, that provide free health services for the pets of the homeless.  For example, Dr. Jon Geller’s organization, the Street Dog Coalition, was established in 2015 in Fort Collins, Colorado.  As Dr. Geller stated in an interview to the Coloradoan, “while people have mixed feelings about providing assistance to homeless people, almost everyone wants to help their pets.”  Dr. Geller is also exposing veterinary students to the challenges of the homeless who have pets by providing special clinics where students can provide medical care to the pets of homeless people.

A little south of Dr. Geller, Dr. Leslie Irvine of the Department of Sociology at the University of Colorado, Boulder published the first book on the homeless and their pets in 2012 entitled “My Dog Always Eats First”. Irvine’s interest in the topic was sparked by an experience she had in Boulder when she attempted to buy a dog from a person who was panhandling in the street median. But the man reacted very negatively to her offer and accused her of being a yuppie meddler. In a subsequent paper on the topic (available for download in the WBI Studies Repository), Dr. Irvine notes that homeless pet owners resisted being stigmatized as bad pet owners, instead arguing that, “…they could provide what other dogs lacked and that their way of caring for an animal surpassed the typical standards, which require a house. They asserted their ability to provide food for their animals, even at personal sacrifice, and to offer enhanced quality of life through constant companionship, an outdoor environment, and freedom.”

Another example of growing animal protection interest in and sympathy for this special demographic is the organization, Pets of the Homeless.  This group was established in 2008 and in the following ten years, it has grown from a small start-up to a group generating almost $1.5 million a year in income.  They have hundreds of volunteers, a rapidly growing donor base and are active in many cities in the USA.  Together with the many volunteer veterinary clinics for the pets of homeless people, the services available to support homeless pet owners have expanded significantly in the past 25 years.

There are many anecdotes of homeless people giving up drugs and trying to bring more order and support to their lives in order to provide for a pet.  Back in 1991, Dr. Earl Strimple of the Macarthur Animal Hospital in Washington DC and a pioneer in animal-assisted programming, published a short report on the human-animal bond in which he described a homeless man who had successfully weaned himself off drugs and alcohol and had obtained treatment for his diabetes so that he could continue to support his pet dog.  This is just one of many anecdotes of the positive impact of a pet on the life of a homeless person.  Recent research now indicates that the homeless who have pets are less likely to use drugs and are more committed to greater stability in their lives.