Oct 19, 2022 The Donkey: An Unsung Hero of Human Civilization

Noted anthropologist and commentator on human-animal interactions and a great admirer of donkeys and their grit, Elizabeth Marshall Thomas wrote the Foreword for a 2010 book by Andy Merrifield, “The Wisdom of Donkeys.” Thomas has great admiration for donkeys and their fortitude. In her Foreword to Merrifield’s book, she states that donkeys “are remarkable animals, stronger and more adaptable than horses, able to live where horses cannot and with substantially more endurance, so that donkeys readily perform tasks that would murder a horse.” She further asserts that donkeys are superior to humans in many ways. She cites their calmness, serenity, self-knowledge, and confidence – traits amply illustrated in Merrifield’s account of his journey with Gribouille, a friend’s donkey, on a long walk through the spectacular vistas of France’s Haut Auvergne district, located roughly in the center of France. 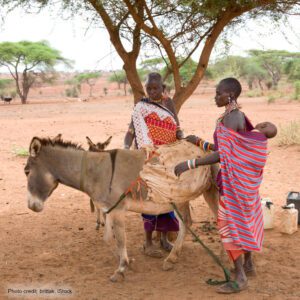 Until recently, donkeys were like the comedian Rodney Dangerfield – they received little or no respect. Volumes have been written on horses and camels, but donkeys (and their cousins, the mules) have been mainly ignored. However, as Peter Mitchell notes in his recent history of donkeys, a donkey has often been a central, if forgotten, character in human history and myth. For example, a donkey carried Jesus into Jerusalem, transported the Greek god Dionysus into battle against the Giants, and was the mount for the prophet Muhammad. Donkeys were also ridden by kings in the Near East, buried near Egypt’s pharaohs, and sacrificed to gods across the fertile crescent and beyond before the horse appeared on the human scene.

A recent study of ancient and modern donkey DNA concluded that donkeys were domesticated around 7,000 years ago when herders in Kenya and the Horn of Africa began to tame the African wild ass (Equus africanus) to produce the modern donkey. The wild ass is a hardy animal well adapted to desert life. The wild population is estimated to be less than 600 individuals, and the species is classified as Critically Endangered. [The wild versions of domesticated animals are frequently endangered or subjected to human persecution – e.g., the wolf.]  Within 2,500 years, domesticated donkeys spread throughout Europe and Asia. As Cicero wrote, it would be unduly tedious to enumerate the services provided by donkeys to the Roman Empire. 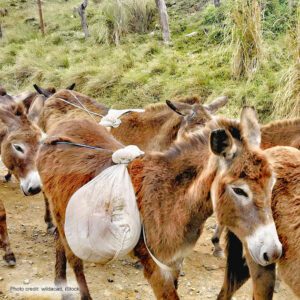 In the New World, many donkeys were needed to transport gold and silver from the mines to the coasts. Starting in the 1500s and extending over 300 years, an estimated 150,000 tons of silver were transported hundreds of kilometers over mountainous trails to the coasts to be loaded onto the Spanish “treasure ships.”

Since they were domesticated, donkeys have been invaluable companions and helpmates to humans – especially for the rural poor. Currently, ninety-nine percent of the global donkey population is found in LMICs (Low and Middle-Income Countries), with 30.6 million donkeys in Africa, 13.2 million in Asia, 11.1 million in North America, and 12.5 million in South America. The Donkey Sanctuary notes donkeys “prop up entire communities today, ferrying water, food, and crops.” Donkeys become loved partners within the family. They are friendly, calm, very intelligent, and full of personality. They will also not do something which they consider to be unsafe. Such behavior underlies their reputation for stubbornness, but it also makes a donkey a trusted companion!

Also, according to The Donkey Sanctuary, better donkey welfare strengthens human livelihoods. In rural areas, a healthy donkey can provide transportation, fetch water, pull a plow, and deliver goods to the market. In Ethiopia, there is a saying, “If you do not have a donkey, then you are a donkey.” Healthy donkeys build household resilience, lead to more productive farming, enable women to be economically active, and increase their community status. Human-donkey bonds are also important, and donkeys’ calm and gentle behavior is an excellent antidote for an anxious and stressed human.

Judging from donation income for various donkey-focused nonprofit organizations, public support for donkeys is widespread. People like and are charmed by donkeys. Donkeys also engage with members of the public in nonrural settings. One example is the participation of donkeys in animal-assisted therapeutic interventions – known as onotherapy. The donkey’s calm demeanor and curiosity help develop a human-animal connection. According to the Donkey Sanctuary, a donkey’s heartbeat synchronizes with the heartbeat of the human with whom she interacts. Onotherapy is not yet as widespread or well-studied as hippotherapy (employing horses).

Donkeys have been very important human helpmates for thousands of years. They have aided human exploration across the globe by carrying goods and supplies to and from the remotest of places. They have not received the recognition they deserve, but maybe that is beginning to change.