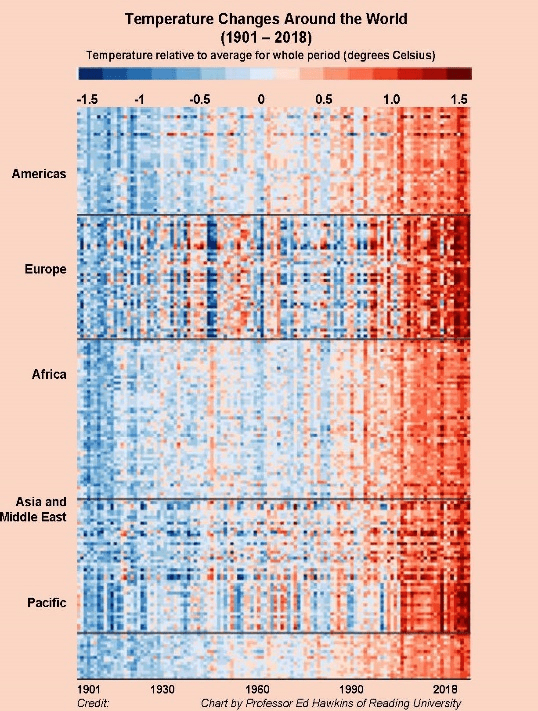 The Dog Days of Summer are so-called because Sirius, the dog star, appears in the night sky from around July through September. Sirius’ appearance in the night sky has long been associated with hot, dry weather (which is becoming hotter and drier as the earth warms). The graphic, developed by Ed Hawkins of Reading University in the UK, shows how average global temperatures have increased since 1901. It is a three-degree Celsius change over the range of colors. Each line in the graphic represents one country with each pixel in each line being one year.

However, this is not primarily an item on climate change, but rather an article on the books that we might read to while away the hot and lazy days of August and, in particular, detective mysteries that feature or highlight dogs. While Conan Doyle’s Hound of the Baskervilles is a classic mystery where dogs feature as the agents of murder, most dog characters in mystery and crime novels are much more benign and are more like Asta, the wire-haired terrier in Dashiel Hammett’s, The Thin Man, than ravenous hounds.
Temperature Changes Around the World (1901-2018)
(Temperature relative to average for whole period-degrees Celsius)
In the past two decades, a host of new book series have appeared that feature partnerships between human and canine detectives. In some, the canine is the smarter of the two but, in most, the human and canine characters work closely together to solve crimes and to right wrongs so that justice is served. Here is a selection of authors and the characters featured in their recently published novels. All the authors listed below have received rave reviews from readers and I suspect that there is plenty of enjoyment in the books below for anyone who delights in a good mystery. Enjoy!
Abrahams, Peter (aka Spencer Quinn) – A Cat was Involved.
The narrator of this series is the canine character, Chet, who helps his human partner, Bernie, solve a series of cases (nine books so far).
Crais, Robert – Suspect.
Traumatized LAPD officer, Scott James who lost his partner and almost his own life in an assault, teams up with Maggie, an explosives detection German Shepherd who lost her handler in Afghanistan. The partnership offers healing for both characters but not without serious threats along the way.
Driscoll, Sara – Lone Wolf.
This is the first book in a series featuring FBI Special Agent Meg Driscoll and her search-and-rescue Labrador, Hawk. There are three books so far.
Kava, Alex – Breaking Creed.
This is the first book of a new series (four books published so far) featuring FBI agent Maggie O’Dell and Robert Creed, an ex-Marine turned K-9 rescue dog trainer.
Meunier, Paula – A Borrowing of Bones.
Ex-soldier Mercy Carr and retired K-9 Elvis, both traumatized by the death of Mercy’s fiancée and Elvis’ handler, work to solve a cold-case murder in Vermont.
Mizushima, Margaret – Timber Creek K-9 Series.
The author grew up on ranches in Texas and Colorado and set her police procedural series, featuring Deputy Mattie Lu Cobb and her K-9 partner Robo in a town in the Colorado Rockies. There are four books so far with the fifth due out in November 2019.
Rosenfelt, David – Open and Shut.
This is the first book of nineteen so far featuring detective Andy Carpenter and his golden retriever companion, Tara.
Print page