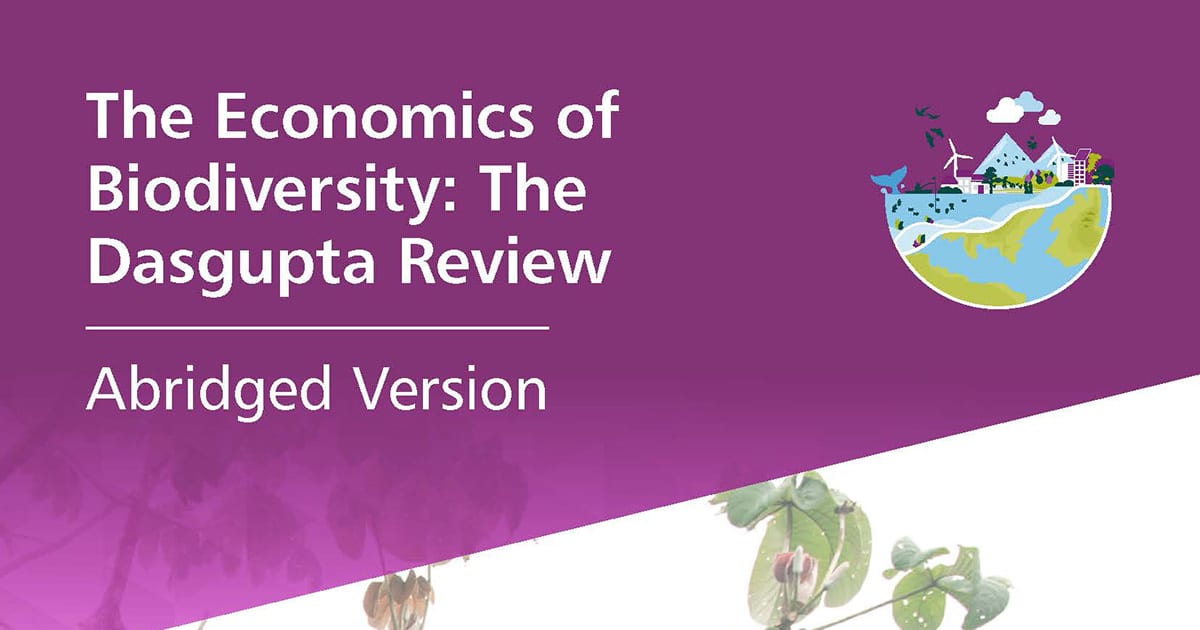 May 10, 2021 The Dasgupta Review and the Economics of Biodiversity

Every now and again, a publication or report comes along that changes how we think about life.  In the animal space, Ruth Harrison’s Animal Machines (1964) was such a publication. In the environmental space, Rachel Carson’s Silent Spring (1962) and the Club of Rome’s Limits to Growth (1972) were others. The British government has just released an independent, comprehensive report which, I suspect, is destined to join these classics. It is The Economics of Biodiversity: The Dasgupta Review that was commissioned by Her Majesty’s Treasury in 2019. The review process was led by Sir Partha Dasgupta, an economist and the Frank Ramsey Professor Emeritus at St. Johns College, Cambridge, and was supported by a multi-disciplinary advisory group. The final report stretches to 610 pages but there is an abridged version (103 pages) that, for those who are time limited, is still full of challenging concepts and observations but is well worth reading and digesting.

Sir Partha notes that he had “all along had it in mind to write a shortened, non-mathematical monograph based on [the full Review but] never expected the resulting monograph to be an easy read … because the economics of biodiversity is a very hard subject.”

The shortened monograph is, therefore, aimed at the concerned citizen who would like an explanation of how the world has come to its current pass and what might be done about it.  In addition, She, the concerned citizen reader, does not know how to respond to her neighbor, an economist who insists that the marketplace can address the challenges the world now faces.  She feels he is too sanguine about the impact of market forces, but she does not know how to counter those ideas. This is the reader Sir Partha hopes to engage in this monograph.

Sir Partha talks of the economics of biodiversity as a study in investment portfolio management.  This approach contrasts the contemporary use of GDP as a measure of economic resources – GDP being a flow reported in the number of dollars of output a year – with the wealth of a country (the worth of its entire portfolio of assets where nature is included as an asset).  The GDP measure may be indispensable in short-run macroeconomic analysis and management, but it is wholly unsuitable in Sir Partha’s judgment for appraising investment or identifying truly sustainable development. As he notes, the founding text of economics was The Wealth of Nations, not The GDP of Nations.

In looking at wealth, economists have long included capital goods and, more recently, have included human capital because we have developed ways of measuring the value of human capital (including health, education, aptitude and skills). Natural capital is the most recent source of wealth but estimating its value has proved challenging. Measurement problems are rife when estimating the stock of many kinds of natural capital (e.g., fisheries stocks present in national waters) but, Sir Partha argues, “it is far better to work with rough and ready figures than to ignore whole swathes of capital goods by pretending they do not exist.”

The distinction between national economic flow (GDP) and national wealth is a constant theme.  One could increase GDP by spending down one’s assets but what happens when those assets have been all converted. Natural capital might be used to support GDP, or it could be eroded by polluting wastes. If the capacity of Nature to regenerate (e.g., drawing down on water in an aquifer faster than it is being replenished) or the capacity of Nature to recycle waste (e.g., plastic pollution of the oceans) is overwhelmed, then natural assets are being used up and the overall wealth of a country will be diminished. This is what is happening to the globe today.

Governments almost everywhere have been amplifying adverse economic behavior by paying people more to exploit the biosphere than to protect it.  For example, direct subsidies to agriculture and fertilizer use, to industries using water and fossil fuels, to fisheries and to the energy sector have been estimated at around $500 billion a year. When considering environmental externalities (indirect subsidies), the total costs are estimated to amount to US$4-6 trillion annually.  By contrast, financial flows supporting biodiversity and conservation are estimated to be around US$78-143 billion a year or a mere 0.1% of global GDP.

Yet all is not hopeless. There are still opportunities to reverse course and develop Sustainable Development Goals that are truly sustainable. It is recommended that the concerned citizen start with Sir Partha’s “readable” monograph and take time to internalize his recommendations and, especially, to incorporate Natural Capital into national wealth and, with great passion and energy, make sure such capital is not being eroded.