Posted at 13:23h By Kathleen Rowan
Charles Rowan, as he was known by the local veterinary practice that tended to his health needs, was a beloved member of the Rowan family for almost fourteen years. He was an excellent ambassador for dogs and for all animals – at least among his own family and some other humans who were fortunate enough to be admitted to his “special” community. Nothing makes us feel closer to animals than the very close relationship we develop with companion animals and the grief we experience when that relationship ends.
This relationship is captured by an epitaph developed by the folk at www.prayersonthewind.com that reads:
“You have gone ahead, and nothing is the same,
Leaving paw prints on my heart that will always remain!” 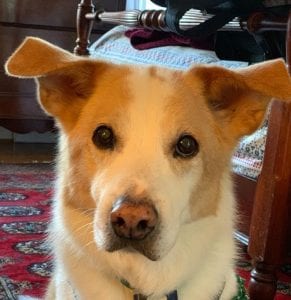 He came to us at about six months of age from the Carroll County Humane Society in Maryland in October of 2005. When he arrived, he was very anxious, never barked and a champion shedder (sometimes we vacuumed twice a day). However, as he acclimated to our home and family, he became more relaxed, his shedding diminished, and he discovered he could get our attention (and what he wanted) by barking.
In his early days, we had difficulty keeping him in chew toys. He would rapidly (in a day or two) rip them apart and remove the squeaker device (a particular goal, apparently). Finally, we located a canvas, triple-stitched alligator that lasted months!

The Rowan family is mourning his passing at the moment but we are looking into developing The Charles Award as a memorial to him and also as a mechanism for WellBeing International to recognize important developments and innovations in dog welfare, the ending of dog homelessness, and the creation of more humane communities globally. We eventually hope to be able to offer more than just a plaque to the winners of the Charles Award.
His favorite snack was a baby carrot (or, even better, several baby carrots) and he would poke his head under the refrigerator door when we reached for the carrots in the crisper drawer. However, he would refuse these carrots if he perceived them to be mere “bribes.” Thus, if we were leaving and tried to give him a carrot to distract him before we left, he would spit it out onto the floor. When we returned, it would still be on the floor but, after the usual hyper-active greeting, he would go and gobble it up.
Charles hated water and would avoid stepping in even small puddles left by the rain. There is a small stream near our house (about 3 feet wide and an inch or so deep) that he had to be carried across if we took him there for one of his walks. He also really liked to be clean and would put up with having his paws washed in a special “dipping” device. For a largely white dog, it was surprisingly rare for him to have any visible dirt.
In loving memory of Charles who defended us from intruders like strange dogs, squirrels and deer, who always comforted us when we were in need and who never doubted that being the center of the family’s attention was ever undeserved.
Print page