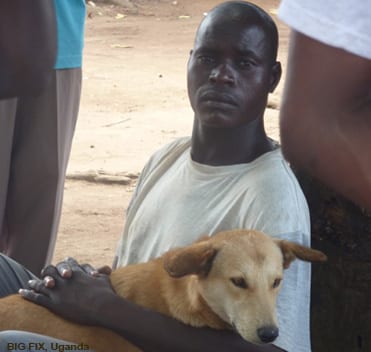 Posted at 07:55h By Meg Daley Olmert
Introduction by Andrew Rowan
There are numerous projects around the world that team animals and people in constructive partnerships that help the people, the animals or, more often, both people and animals. From Dr. Dog projects in China and India to Animal Assisted Activities in the US and Europe, people-dog partnerships are everywhere.
The Tale in this newsletter describes such a program – The Big Fix’s, Comfort Dog Project (CDP) – in Northern Uganda where war and disruption have traumatized thousands of people and left survivors of those forced to serve in the Lord’s Resistance Army as outcasts in their communities. Dogs in these communities are also marginalized.
The account below by Meg Olmert, an official advisor to the CDP and author of Made for Each Other: The Biology of the Human-Animal Bond, describes the changes being wrought by connecting marginalized dogs and people.
The Big Fix in Northern Uganda
December 17, 2019 | By Meg Daley Olmert

I’m Meg Daley Olmert and for the last 20 years I’ve been researching the biology of the human-animal bond and its therapeutic effects. In 2011, I joined the Warrior Canine Connection Program at Walter Reed National Military Medical Center, an innovative and highly effective animal-assisted intervention that involves US Veterans in the training of service dogs to reduce the symptoms of combat trauma.

In 2017, I received a call from Sarah Schmidt, the founder and president of The Big Fix Uganda—a non-profit, based in Port Townsend, WA that operates the only veterinary hospital in Northern Uganda. Since 2012, The Big Fix has provided veterinary services, 365 days a year, to ease the suffering of animals in Northern Uganda and eradicate the deadly threat of rabies.
The fate of dogs in Northern Uganda is grim. Everyone has them, but these dogs are not pets. They provide home security—essential when you do not have a front door—and valuable hunting partners. Despite their service, they are often neglected, abused, and even killed. This emotional disconnect is fueled by the very real fear of rabies and the horror of a war that left many human survivors equally reviled and abused.
The Big Fix animal hospital is in Gulu, the birthplace of Joseph Kony, the warlord who kidnapped 30,000 boys and girls and forced them into killing or sex slavery—or both. Those who made it out of the bush returned to their villages where they were reviled and shunned as murderers or whores. Children born of rape are rejected as “Kony’s kids.” Sexual violence has left many with HIV. On average, 10 people in the Gulu district commit suicide monthly, with another 3 suicide attempts per week.
In 2015, The BIG FIX realized they had to expand their daunting mission to an even greater one—rescuing the traumatized people of Northern Uganda. They created The Comfort Dog Project (CDP)—an animal assisted therapy much like Warrior Canine Connection—except it is for people who have never imagined a positive canine interaction! This radical idea was inspired by a community psychologist, Francis Okello Oloya. Francis was blinded at age 12 during the war in Northern Uganda, but miraculously survived against all odds. While at boarding school, two neighborhood dogs were drawn to him.  Amazingly, each night when those dogs heard the tapping of his cane, they would come and guide him to the latrine. Not only did this mean he did not have to suffer the humiliation of asking a fellow student for help, it showed him the generosity and caring hearts beating in these dogs that no one else saw. 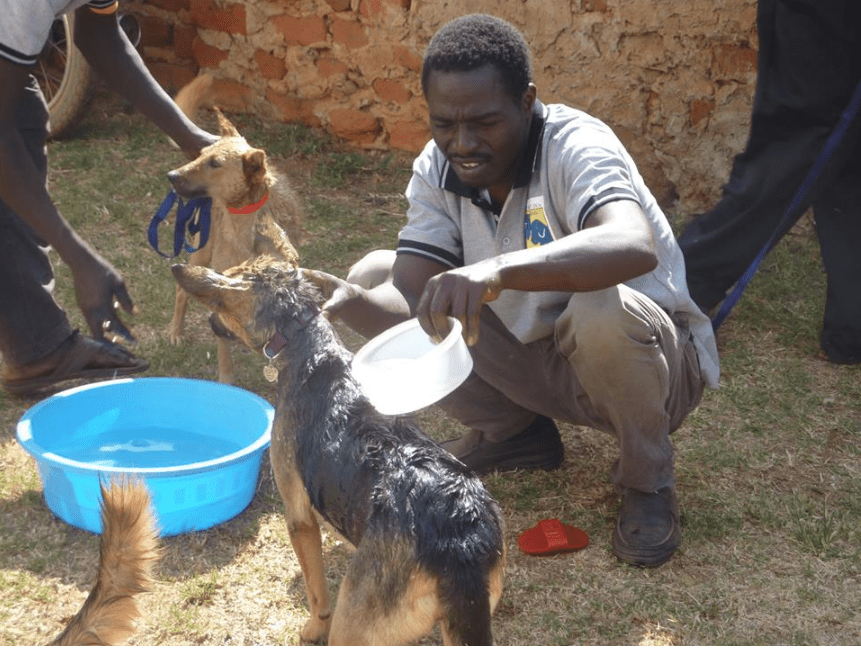 The Comfort Dog Project combines trauma counseling with instruction on how to create loving bonds with dogs. Comfort Dog Guardians are taught how to feed, care and communicate with dogs rescued and rehabilitated by The Big Fix. CDP has also discovered how important dog training is to solidify the human-dog bond and enhance the program’s therapeutic impact. Since 2015, thirty-eight Guardians have completed the program and have gone on to receive further instruction on how to be Field Educators. This is particularly impressive considering the severe social shut down suffered by many before they entered the program. The CDP Field Educators find they can now play key roles in the mobile field clinics teaching local dog owners how to care for their dogs and doing dog training demonstrations that amaze and delight all.

Even with my knowledge of the deep neural roots of the human-animal bond, The Comfort Dog Project stretches the limits of anything I had ever thought possible. Psychological assessments show that almost all the Guardians display a reduction in Post-Traumatic Stress Disorder (PTSD) symptoms and improved well-being. Another measure of the program’s success can be drawn from the 150 war survivors who have applied for the CDP program this year. Now the challenge is being able to say yes to them all.
It’s hard for us to understand how radical this approach is for people who’ve at best seen dogs as a tool or, at worst, a cur or deadly enemy. But neither can we grasp the desperation of the people of Northern Uganda. I saw with my own eyes how the CDP program is making the unimaginable a healing reality. The ability of these dogs to forgive the cruelty they have suffered is inspiring and their love and loyalty allows the Guardians to rediscover emotions like love, pride, and joy. Together, humans and dogs are forging family bonds where there were none, creating a powerful psychobiological buffer against despair. Together both are safer and happier, living proof of a Big Fix.
There are millions of broken human and dog hearts around the world. Here is a short BBC video so you can see for yourselves how we can save each other against all odds.
https://www.bbc.com/news/av/world-49409125/ugandan-war-survivors-partnered-with-therapy-dogs
Print page