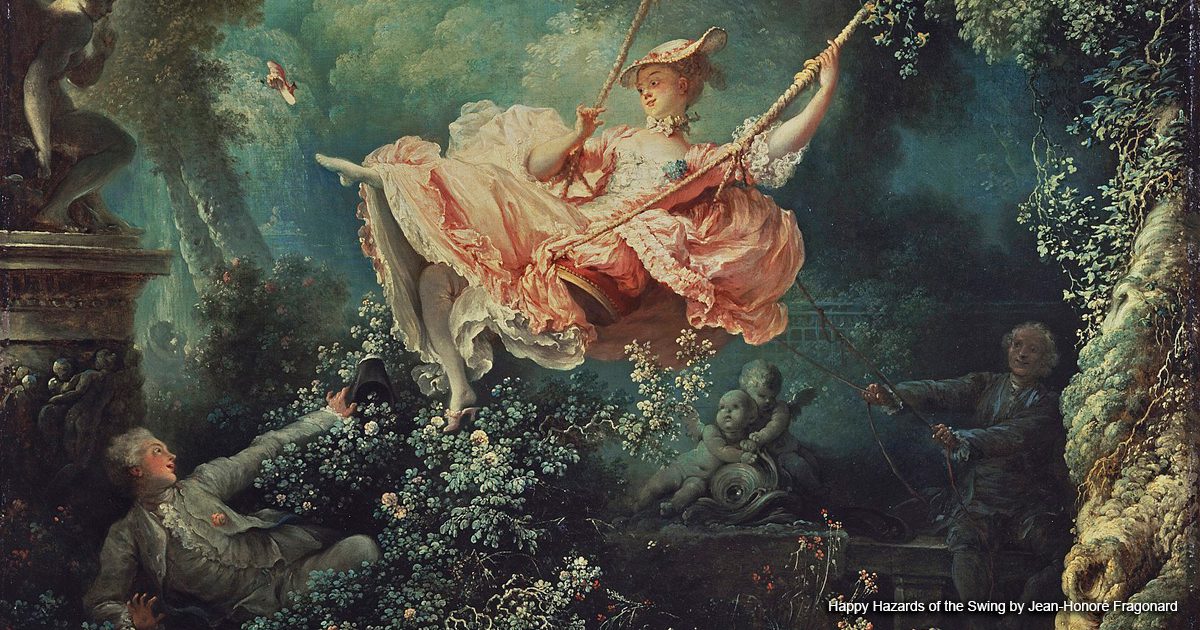 A finely dressed young woman on a swing ascending toward the forest canopy kicks one leg, tossing her shoe far away. This is a deliberate act, not an accident. Her expression is one of careful concentration. Her eyes are fixed on the shoe, which she may even have carefully aimed. Below her is a young man, also elaborately dressed, has been hiding, or pretending to hide, though she is clearly aware of his presence. By kicking upward, she is giving him a fleeting glimpse of her leg. A bit higher is a statue of Cupid, enjoining silence with his fingers to his lips. Below her is a statue of two cherubs. In the distance is a shadowy figure of a man controlling the swing with ropes.

The lost shoe may be a, perhaps slightly ironic, motif taken from the story of ‘Cinderella’ by Charles Perrault, where the heroine loses a shoe as she leaves a ball, giving the prince a means to search for her. The shoe in the picture is a token of the girl on the swing, an offering to the young man, who can now look for the shoe in the forest, find it, and pursue her to give it back. Perhaps the reader by now has realized that this scene is from the famous picture entitled, Happy Hazards of the Swing by Jean-Honoré Fragonard, a leading artist of the French Rococo, painted in 1767.

The Rococo style was very limited. The incessant playfulness could easily seem trivial. The image of eternal adolescence could be charming but also bleak. A touch of gravity is added by the forest itself. The elaborately landscaped park is overgrown, and the trees seem to loom threateningly. In this highly artificial environment, nature is starting to reassert her sovereignty.

The artist probably didn’t realize this, but the painting, and even the possible reference to Cinderella, builds on the animal bride cycle. The girl on the swing flies like a bird. The elaborate costume, with many brightly colored petticoats and frills, is like a coat of feathers. They extend around her on each side like wings. The shoe is a feather dropped in flight. This cycle provides associations that can take the picture out of an environment that, for all the hint of rebellion, is extremely limited in terms of era and social class. It places it in the grand drama of humankind, as we try to negotiate our place among animals, plants, and the natural world.

The bride in the cycle may be any animal from a toad to a dolphin, but she is most frequently a bird. She becomes human and marries a man, though usually only for a limited time. In the swan maiden stories, a group of swans in a forest alights at a pond. The birds take off their skins to bathe and turn into women. A man is watching in the bushes and falls in love with one. He steals her skin, so, when the maidens become swans once more, she is unable to transform. They marry, live together in apparent happiness, and may even have children, but one day the woman finds the skin, puts it on, becomes a swan once again, and flies away. In some stories, the husband undertakes a long pilgrimage in search of his bride. Sometimes, she has left behind a token such as a feather or a shoe. After many trials and tribulations, they are reunited.

Variants of the animal bride cycle are found all over the world in cultures that appear to have had little or no contact with one another, indicating that the cycle is extremely old. It seems to issue from a time when boundaries of species were far more porous than today, and the understanding of humankind was more fluid. The difference of species serves in these stories as essentially an amplification of that of gender, adding enticement, danger, and mystery.

The story of the animal bride is about romantic love in all its complexity. This includes its tragic and playful sides, its little deceptions, and big ones. It can include the lies that people tell to others and themselves, and it can sometimes, but not always, forgive them as well. The young man will search in the woods for the shoe and eventually find it. He will then approach a party, perhaps a group of young women, in the woods. He will ask, “Excuse me. Did someone lose this shoe?” And then?

Dr. Boria Sax is an expert on the connections between humans, animals, and nature in folklore and myth.  He is the author of a remarkable recent book on birds in art and human thought and also an earlier volume on animal brides, The Serpent and the Swan: Animal Bride Folklore and Literature, University of Tennessee Press, 2001.