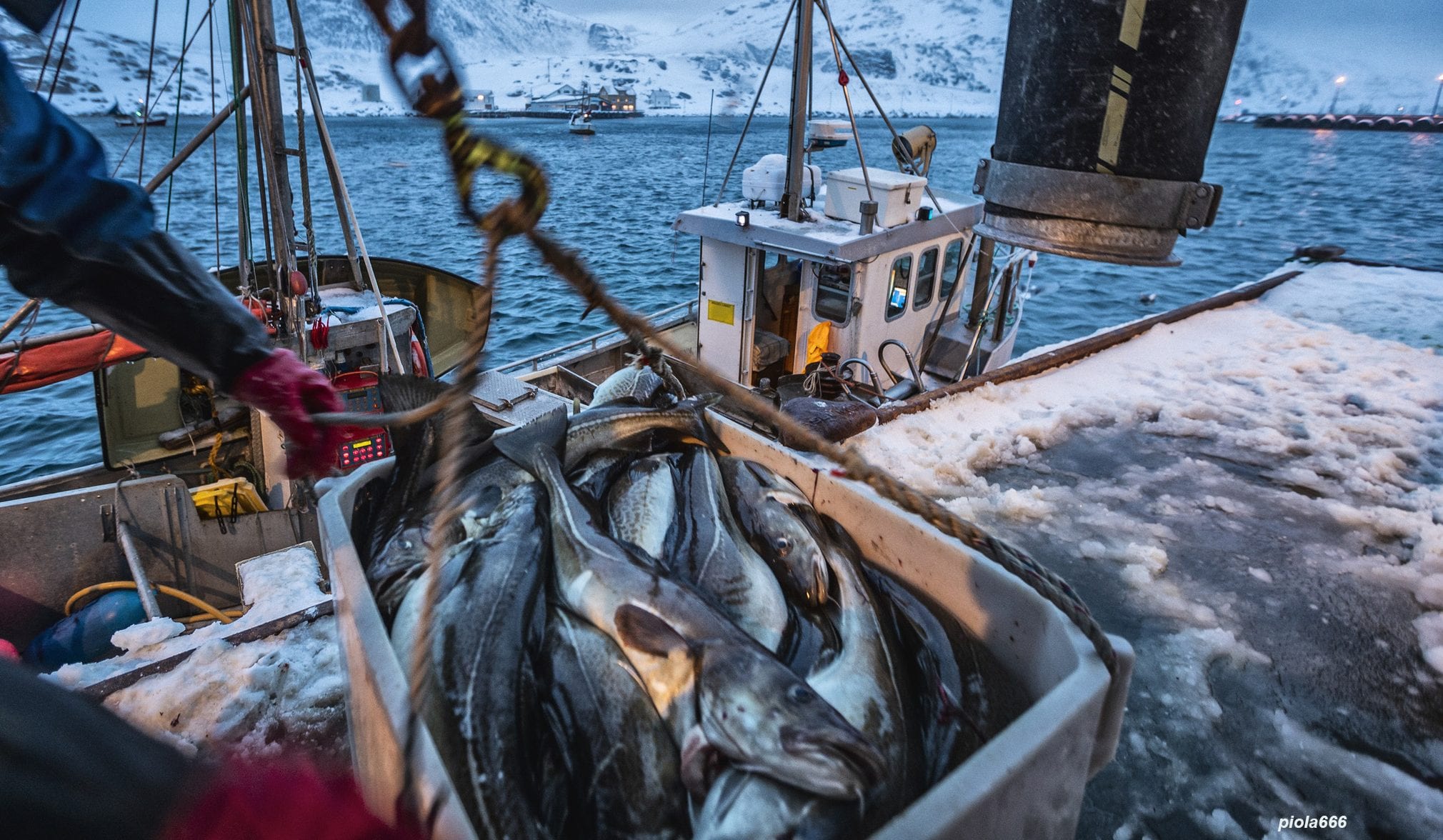 Posted at 16:07h By Andrew Rowan, DPhil
The total global catch of wild fish increased from 31 million metric tons in 1950 to a high of 130 million metric tons in 1996 before falling back to 109 million metric tons in 2010. However, from 1950 onwards, 366 of 1,519 fisheries collapsed (defined as a 90 percent reduction in stock) with overfishing being a major cause of many of the collapses.   Climate variation, often in the guise of El Nino events, was also a very important factor driving large fluctuations in fish stocks. Despite major advances in the scientific understanding of the variation in global fish stocks and the development of sophisticated analytical tools to guide decisions about how to manage a sustainable fishery, the number of fishery collapses has been stable over time, indicating no overall improvement in fishery management.
Global Fishery Catch from www.ourworldindata.org/seafood-production is shown below. 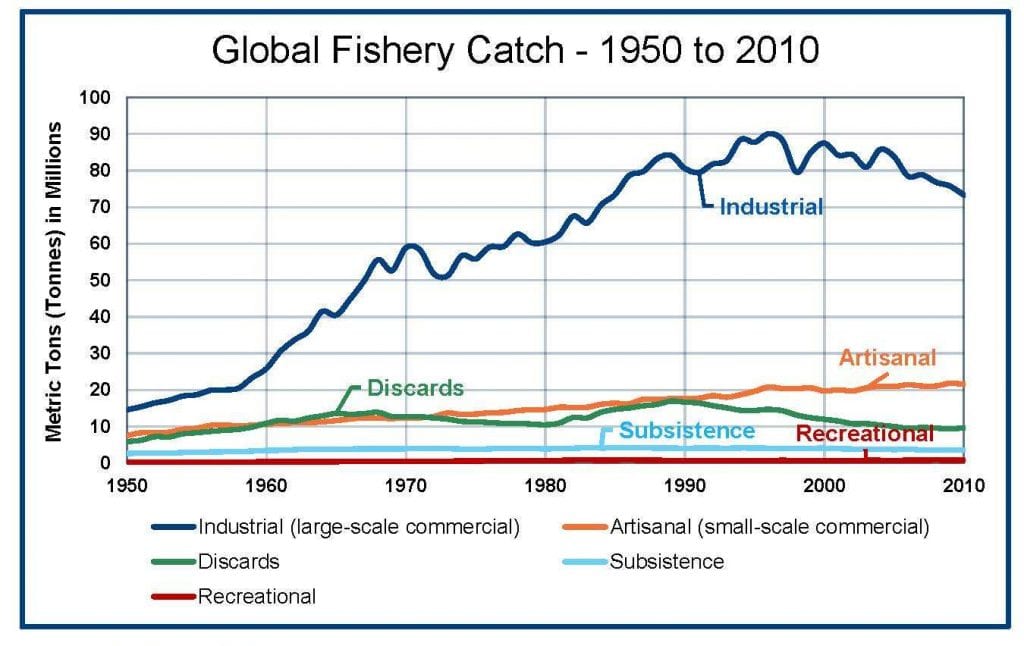 While the collapse of the North Atlantic cod fishery may be one of the best-known examples of the non-sustainable management of a fishery, different fisheries have collapsed all over the world and most fisheries are considered to be fully exploited. The tuna fishery for the main species of tuna – giant Bluefin, Bigeye, Yellowfin, Skipjack, and Albacore – is certainly fully exploited today. According to a recent paper in Fisheries Research that compiled a comprehensive and harmonized global data set of global tuna catches by area from 1950 onwards, the total weight of tuna landed annually has increased tenfold to over 6 million metric tons a year. The image displays tuna catches for three different time periods: 1950-54, 1980-84 and 2012-16, and shows clearly how tuna fishing now encompasses most of the oceans of the globe (an estimated 55-90 percent of total ocean area). Almost half the tuna now being landed are skipjack tuna, with yellowfin making up a further one-quarter. 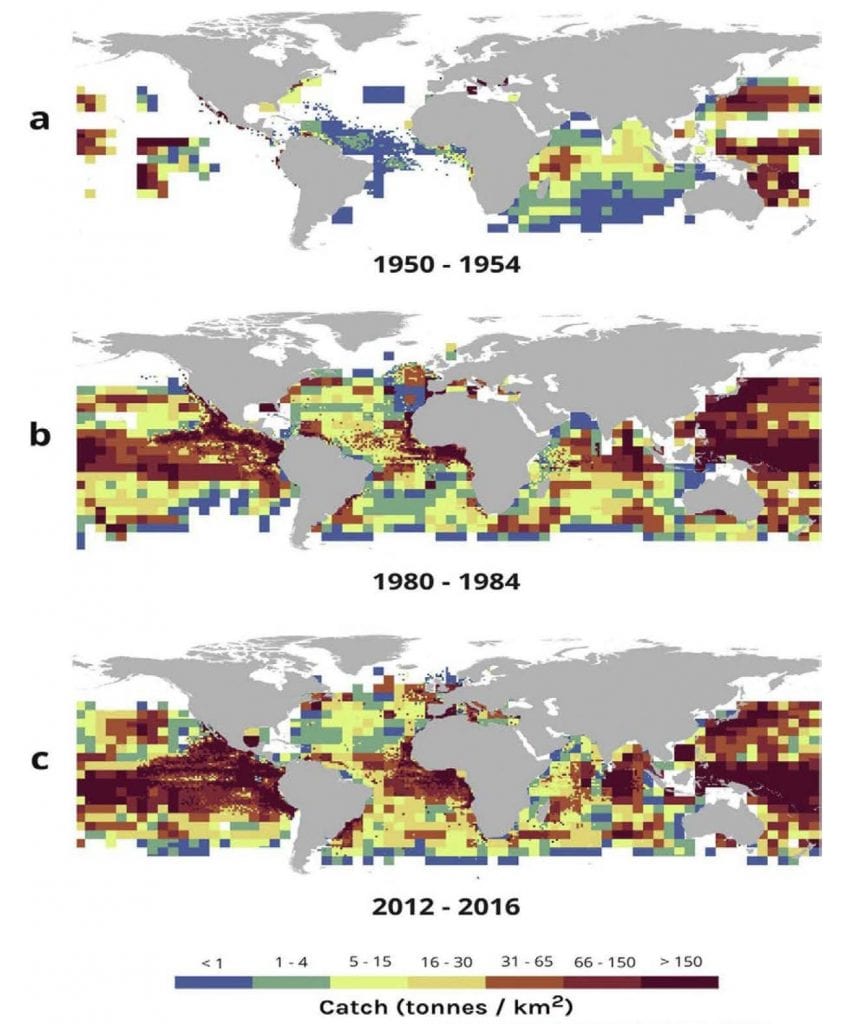 An earlier publication from 2011 estimated the trends in adult tuna biomass from 1930 up to 2010. The adult biomass of southern Bluefin declined by 95 percent from 1930 to 2010. The adult biomass of the “tropical” tunas (Skipjack, Yellowfin, and Bigeye) declined by approximately 60 percent since 1970. Given that the major species of tuna currently account for $42 billion annually, or over one-quarter of the global seafood trade, the long-term future of tuna is a very important factor in global trade and food security.
The North Atlantic cod fishery collapsed very suddenly around 1990 and has still not shown much sign of recovery despite the moratorium on the cod fishery declared by the Canadian government in 1992. Before the collapse, the fishery’s managers ignored scientific data and set catch quotas that were too high. The fishery increased its take of younger and younger fish (older females produce far more surviving young) and, eventually, the inevitable happened. Looking at the annual tuna landings, the declining age of the tuna being caught, and the declining in overall tuna biomass, one cannot help but think back to Yogi Berra’s famous quote – “It looks like déjà vu all over again.”
Print page