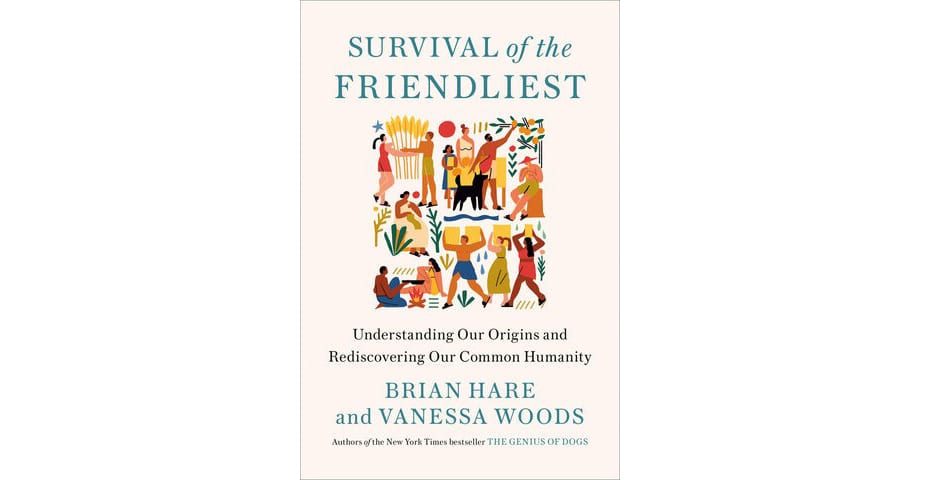 Jul 20, 2020 Survival of the Friendliest by Brian Hare and Vanessa Woods

Posted at 06:15h By Brian Hare and Vanessa Woods
Reviewed by Andrew Rowan – Brian Hare, a professor in the Department of Evolutionary Anthropology at Duke University and his wife, Vanessa Woods, an award-winning journalist and a research scientist at the Center for Cognitive Neuroscience also at Duke University, have just produced a new book, Survival of the Friendliest: Understanding our Origins and Rediscovering our Common Humanity. The title is a variation on the widespread belief that evolution is driven by a process encapsulated by the phrase, Survival of the Fittest. Charles Darwin used this phrase and wrote that as a proxy for the term natural selection, “survival of the fittest is more accurate, and is sometimes equally convenient.” But Darwin was also very impressed by the levels of cooperation he observed in nature and wrote that the most cooperative communities “would flourish best and rear the greatest number of offspring.”
Hare and Woods argue that it is not competition and aggression that have led to dominance of the globe by modern humans but rather it is our capacity for kindness and friendship that have led us to outcompete Homo erectus (who was already making and using tools 1.8 million years ago – 1.5 million years before Homo sapiens appeared) and at least four other branches of Homo sapiens. Modern humans established their dominance only in the last 50,000 years. Then, around 25,000 years ago, our ancestors started to leave evidence of unique forms of cognition (e.g. rock paintings and archeological finds of early jewelry) and expanded social networks.
Hare and Woods discuss the changes leading to modern humans as a process of self-domestication leading to greater co-operation, an ability to live successfully in larger groups with a consequent increase in technological invention. They support these conclusions with a range of data involving physical structure (the evolving shape of modern human skulls) and biological and physiological evidence (e.g. the role of the hormone oxytocin in eliciting both nurturing/friendly behavior but also aggression and dehumanization) and hints from the behavior of chimpanzees (aggressive and suspicious of strangers) and bonobos (close cousins of the chimpanzees but much lower levels of aggression and greater friendliness).
A common approach to explaining modern human’s domination of the world involves pointing at the much larger and denser brains, and greater intelligence, found in Homo sapiens. But the authors note that the brain of Home sapiens was already large at least 200,000 years ago but that our branch of Homo sapiens only became dominant (outcompeting Neanderthals and other branches) around 50,000 years ago. They argue that it was the rapid expansion of social networks (supported by the friendliness trait and a consequently greater acceptance of strangers) that led to self-domestication and an explosion of technological innovation.
The book ranges across many disciplines and concludes with chapters involving the development of the “theory of mind,” the important role of oxytocin in promoting both friendliness but also aggression and prejudice, the story of Ota Benga (a pygmy housed in the Bronx zoo in 1906) and the role of simianization in human prejudice, and the development of constitutional democracies and the emergence of the alt-right across the world. They conclude by noting that “our lives should be measured not by how many enemies we have conquered, but by how many friends we have made.”
In the end, the authors of Survival of the Friendliest commented to me that they needed all they had learned about friendliness to survive the process of writing this book. I completely understand what they have gone through. My wife and I decided to launch WellBeing International together and we also needed all our “friendliest” characteristics to get safely through the earliest stages of our new adventure together.”
Survival of the Friendliest by Brian Hare and Vanessa Woods, published by Random House, New York; 2020.
Print page