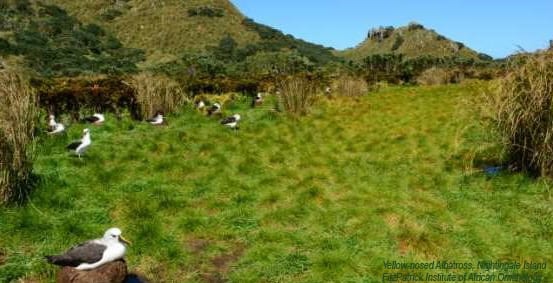 May 30, 2020 Shifting Baselines: Understanding the True Extent of Wildlife Decline

Posted at 05:04h By Andrew Rowan, DPhil
Over the past few years, news stories describing the global wildlife decline have generally referenced the Living Planet Index (LPI), which is based on methodology developed by the World Wildlife Fund and the Zoological Society of London. The LPI indicates that wildlife populations have declined by 60% from 1970 through 2014. The LPI does not estimate the extent of the wildlife decline that occurred before 1970.
In 1995, Daniel Pauly, a fisheries scientist in Vancouver, Canada, published a landmark paper, “Anecdotes and the shifting baseline syndrome of fisheries,” in which he notes that fisheries scientists sometimes failed to identify the correct “baseline” population (or how abundant a fish species was before human exploitation), which affected their estimates about a particular fishery’s sustainable harvest. As a result, long-term declines in wildlife populations become difficult to identify, since each generation redefines a new baseline for what is “natural.” 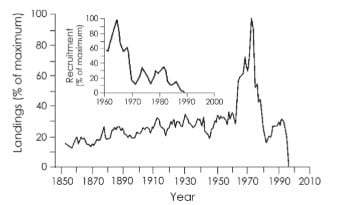 This concept has been widely discussed by marine and fisheries scientists but, as Sumaila and Pauly note in a chapter entitled “The ‘March of Folly’ in Global Fisheries” in a 2011 book on Shifting Baselines, global fishery policies have largely ignored the lessons of shifted baselines. The cod fishery off the eastern seaboard of Canada and New England is a classic example of a policy “folly.” The accompanying chart shows the proportion of cod landed in Labrador and Newfoundland from 1850 through 2010, and the inset shows the recruitment of young cod into the adult population.

From 1850 through to the 1960s, 150-250,000 tonnes of cod were landed every year by the primarily small-scale inshore fishery. The dramatic increase in the 1960s was due to foreign deep-sea trawlers. Canada imposed a 200-mile exclusion zone, but the foreign trawlers were then succeeded by Canadian ships. Recruitment of young fish plummeted and, by the beginning of the 21st century, the cod fishery was no more. It has still not recovered even though Canada has just increased the allowable catch by 30% – to 12,350 tonnes!.
While the “shifting baselines” syndrome is less evident when discussing land animals, each generation still tends to base its understanding of what is “natural” on its experiences when young. The following anecdote is a tiny snapshot of declining populations of yellow-nosed albatross nesting on Nightingale Island in the south Atlantic. 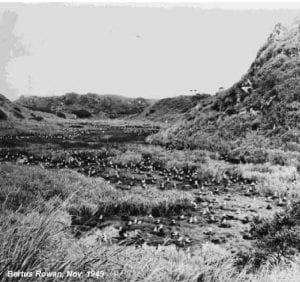 Nightingale is one of four islands that constitute the Tristan archipelago. Tristan, where 250 people live, is the only island in the archipelago that is inhabited and is considered one of the most remote human communities in the world. The nearest city is Cape Town, South Africa, over 1,500 miles and a 6-day boat trip away. Despite its remoteness, two series of photographs taken 66 years apart depicting the nests of the Yellow-nosed Albatross on Nightingale document a decline in albatross populations. The first photograph was taken in early November 1949 by Bertus Rowan on a trip to Nightingale. It shows hundreds of “mollies” (albatross) nesting on the island in what the locals referred to as Molly Pond 2. 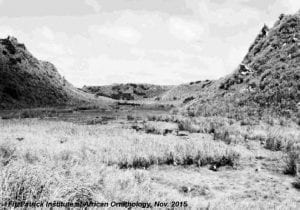 The second photograph (taken almost precisely 66 years later, in November 2015 and showing the same nesting area from the same perspective) has very few albatross nests scattered across the “pond.”

Nightingale has never been inhabited by humans and has, so far, not suffered an invasion of rats, mice or other creatures that often travel with humans. Therefore, the decline in nesting albatross must be related to some other factor. Albatross in the southern oceans are particularly affected by long-line fishing, in which a single line of thousands of baited hooks stretching up to 100 kilometers in length is dragged behind fishing vessels to catch tuna and other open-ocean fish. According to Bird Life International, around 100,000 albatross a year are caught on these hooks and drown.

Human activities have contributed to declines in wildlife populations for centuries – not just the past 40 or 50 years. While recent reports of declining wildlife numbers are important to acknowledge these changes, we must constantly guard ourselves against viewing the state of the world 25 or 50 years ago as its “natural” condition. In fact, the history is far longer.
Print page