Posted at 09:37h By Andrew Rowan and Kathleen Rowan

The first two parts in WellBeing International’s series on saving tigers recounted just how America arrived at a situation where it had twice as many captive tigers as wild tigers in the world (Part 1) and who owned or housed those captive tigers (Part 2). Tigers in America (TIA) has provided several vital lessons that guide current and future actions and campaigns in its eleven-year existence.

What Has Been Learned and As We Advance

Part 2 of this series noted that commercial and so-called “sanctuary” operations, usually known as Roadside Zoos, require tiger cubs to attract paying visitors for cub-petting and photo opportunities. Cubs can only interact with the public for around 100 days before they become too big and dangerous, and homes must be found for them. This short period when cubs can be exploited drives the increased breeding of tigers and the eventual production of a tiger surplus.

Cub-petting and public interactions with tigers are not permitted in true sanctuaries. According to TIA, a true sanctuary does not breed its tigers, does not permit the general public to interact

with the animals, and provides lifetime care in adequate space with proper health care. A sufficient number of suitable sanctuary spaces is essential if big cats are to be rescued from bad situations and cared for properly.

Federal and State laws must be harmonized and, even more importantly, accompanied by effective enforcement and adequate resources. The lack of space to house rescued animals has, in the past, undermined enforcement efforts because the authorities are unwilling to seize animals and shut down operations if there is no place to house them adequately. Furthermore, private citizens should not own and house exotic animals.

There are a growing number of sanctuaries recognized by TIA. In addition, the increase in available resources (annual income of the TIA sanctuaries has increased more than ten-fold this century) has been an essential element in the recent successes where roadside zoos and cub-petting operations have been shut down.

The Tide Is Turning.

The three cases below are examples of effective coordination between private interests, regulators, and law enforcement (both State and Federal) to shut down operations that hide behind “sanctuary” nomenclature or conservation education claims to satisfy personal ambitions or income generation. In addition, the number of facilities now willing to provide true sanctuary for rescued and confiscated tigers (and other big cats) has grown. There are many more available spaces for rescued animals.

In August 2019, the California State Department of Fish and Wildlife (CDFW) asked TIA if they could find homes for 13 tigers and 11 lions housed at the Wildlife Waystation, which was being closed down. The Waystation was a controversial facility launched in 1976 as a refuge for wildlife but lacked adequate governance and many basic amenities (e.g., running water to animal enclosures) and had numerous run-ins with the authorities in the four decades since it was established. In the past twenty years, the Waystation experienced a seemingly endless series of disasters, including floods and fires, and health care challenges such as the deaths of 18 tigers and lions of distemper. 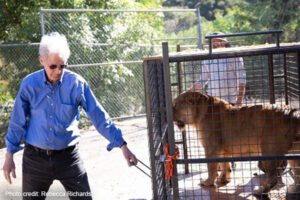 There were 32 big cats left at Wildlife Waystation needing relocation – 12 tigers, 11 lions, two leopards, and seven mountain lions. However, Mungar, one of the 12 tigers, was not on the relocation list. He was blind and reportedly could not feed himself. TIA agreed to place all the big cats only if Mungar was included.

Over nine weeks in the fall of 2019, TIA personnel came to the Waystation to meet the transporters, manage the paperwork, and load the cats. They spent time with Mungar, hand-feeding him chicken and bottled water in his plywood box where he lay on a urine-soaked dirt floor that turned to mud when it rained. Mungar was confined to this space 24 hours a day, seven days a week, and could only get half his body into the den to escape the sun.

At one time, Mungar was a very popular resident. The Wildlife Waystation instituted “leash walking” where, for a fee, you could walk him around the property. When his sight failed, he was left in his cage and exploited to solicit donations. He looked like he had given up, but there was finally some good news. The Performing Animal Welfare Society (PAWS) called and said they would take him. 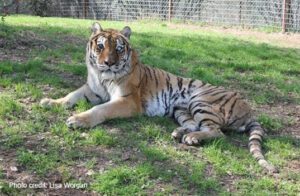 Mungar was the last tiger to leave the Waystation on October 9, 2019.  Six hours later, he arrived at PAWS, where he was introduced to his new home, including a den that opened onto grassy fields. Mungar found his way into the shelter and out the other side, where he climbed into his pool and relaxed. Under the care of PAWS, it was discovered that Mungar had some limited sight in his right eye and could feed himself. A bad cut on his right hip, probably caused by the cage he was kept in at the Waystation, healed, and Mungar could now often be found rolling in the grass in his enclosure with his belly in the sun. Unlike the other tigers, he would spend the entire night sleeping outside under the stars.

The Waystation is now permanently closed (its founder died in January 2022), and the property is up for sale. The tigers from Hollywood trainers that would probably have gone to the Waystation in the past have recently been placed in TIA partner sanctuaries.

Tim Stark registered Wildlife In Need (WIN) as a non-profit dedicated to rescuing and rehabilitating wildlife in Southern Indiana in 1999. The organization raised under $50,000 a year for the first decade and cared for only a few dozen birds of prey and other indigenous wildlife. In 2012, WIN started tiger breeding and offering public cub-petting sessions. It then became part of the tiger breeding network in America. By 2017, WIN housed 300 wild animals, including 50 big cats, and had an annual income of more than one million dollars. In 2016, the US Department of Agriculture (USDA) cited WIN for the mistreatment of tiger cubs and continued to cite the facility for various problems over the next four years. Finally, a USDA judge issued an order revoking WIN’s permit on February 3, 2020.

The Indiana Department of Natural Resources was also addressing the situation at WIN and working with the USDA. Then, in February 2020, the Indiana Attorney General (AG) stepped in, filing a lawsuit alleging that WIN violated its tax-exempt status by deceiving consumers who made donations and because it kept the animals in deplorable conditions. The charges alleged various Animal Welfare Act violations. Those violations included beating a leopard to death with a baseball bat, multiple unexplained deaths (a strangled ocelot and a tiger cub that died after a botched declaw), feeding roadkill and expired meat to the big cats, and not providing clean drinking water and adequate shelter. In October 2020, the WIN Board dissolved the organization, but this did not end the AG’s legal action. In February 2021, was found guilty of embezzlement. At the request of a TIA Sanctuary and the Indianapolis Zoo, TIA assisted with placing some of the cats after WIN’s closure. This case was one of the first in the country where exotic animal abuses were considered sufficiently severe for the State AG to become involved.

Joe “Exotic” Schreibvogel (the “Tiger King” of the 2020 Netflix series) built and ran what became the largest tiger breeding facility in the country in Wynnewood, Oklahoma. In January 2020, he was sentenced to 22 years in prison for contracting with someone to kill Carole Baskin, the CEO of Big Cat Sanctuary, and 17 counts of animal abuse, including killing five healthy tigers because he needed space to store circus tigers for the winter. With Joe Exotic in jail, his partner Jeff Lowe continued the operation. In June 2020, the court ruled the facility transfer to Lowe was illegal and that the property had to be vacated by October 1 of that year. A USDA inspection reported that Lowe had 212 animals, including 100 tigers. The USDA also reported dead tigers on a burn pile and lion cubs suffering from flystrike.

TIA was again asked to help with the shutdown of the facility. On October 2, 2020, Sheriff Jim Mullet of Garvin County, Oklahoma, started the shutdown process, ordering 24 animals to be handed over to TIA. TIA partner sanctuaries from Texas and Colorado arrived with food and transport equipment, loaded the tigers and bears, and took them to Colorado. However, Lowe had already given away 30 tigers and moved others to a new “Tiger King Park” in Thackerville, Oklahoma. Lowe hired a local sheriff’s department member to head security. However, following conversations with USDA and the US Department of Justice officials, it was determined that the animals at the new facility should also be seized. With the protection provided by the US Marshals’ Service, all the animals were removed from the new “Tiger King Park.” Most of the big cats went to TIA partner sanctuaries. Finally, on December 23, 2020, Jeff and Lauren Lowe signed a consent decree giving up ownership of all the seized animals and their right to have exotic animals in the future. Tiger King Park is in the process of being disassembled, and the property is up for sale. This case involved cooperation between Federal authorities, a local sheriff, and several NGOs.

These three rescues support the claims that public awareness of exotic animal abuse has reached a level where the authorities can no longer ignore such abuse. State and Federal authorities have begun to pursue exotic animal violations, threatening civil and criminal penalties. The growing availability of space at existing sanctuaries for rescued big cats has also been an essential factor in the willingness of the authorities to support enforcement actions. Additionally, the shutdown of some tiger breeding operations reduces the supply of cubs for cub-petting and the subsequent flow of tigers into roadside zoos.

In the last ten years, 73 roadside zoos and 22 circuses have closed, and the number of TIA partner sanctuaries has grown from ten to fifteen.

Tigers in America (TIA) is a nationwide, all-volunteer organization that operates from New York City. It has recently expanded its mission to accommodate the surrender or seizure of all big cats, including lions, leopards, mountain lions, cheetahs, and jaguars, in addition to tigers.