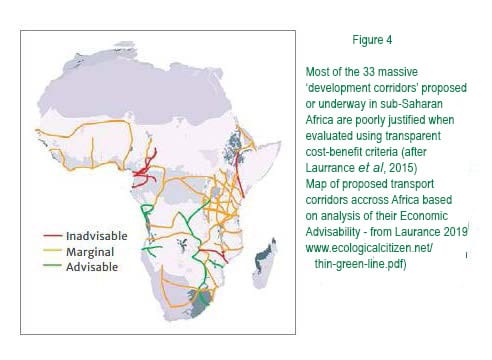 From 19-22 March of this year, several hundred conservation biologists, activists, economists, lawyers and political scientists convened in the Sultan Nazrin Shah Centre in Worcester College, Oxford to discuss global-scale challenges to wildlife and how the assembled cornucopia of disciplines could help to address and mitigate those challenges. There were many interesting and provocative presentations but the one that stood out for me was a presentation by William Laurance on the impact that infrastructure development is going to have on wildlife and wild places.

Laurance described the impact that the huge proposed increases in infrastructure (e.g. China’s $8 trillion Belt and Road Initiative) for transportation, energy, and extractive industries will have on the globe. He emphasized that he accepted the need for new infrastructure, but then argued that many proposed infrastructure projects are foolhardy based on rational cost-benefit analyses.

New road construction is projected to add 25 million kilometers of paved roads by 2050 (enough to encircle the earth 600 times). At least 3,700 major hydropower projects are planned or underway not to mention new mining, fossil-fuel, and other extractive projects. Africa is proposing numerous development corridors across the continent while South America’s Initiative for the Integration of Regional Infrastructure is similar. The impact of roads and transportation corridors on wildlife and wild places is huge. The roads cut corridors through forests that change the microclimates around them and 95% of deforestation occurs within 5.5 km of a new road.

Despite all the recent depressing news regarding wildlife declines that have appeared in the last decade, Laurance’s presentation was perhaps the most depressing account to date!  He noted that scientists usually shied away from protesting infrastructure projects and that most NGOs were overwhelmed.  He has established ALERT to help shine a spotlight on infrastructure projects that threaten the remaining wildlands and to provide a vehicle where he and other scientists can voice their opinions which are then made available to the media.
Please note, our partner organization, the Center for Large Landscape Conservation, has been established to promote the connectivity of wild spaces and is heavily engaged with the issue of roads and transport corridors fragmenting habitat.
Print page