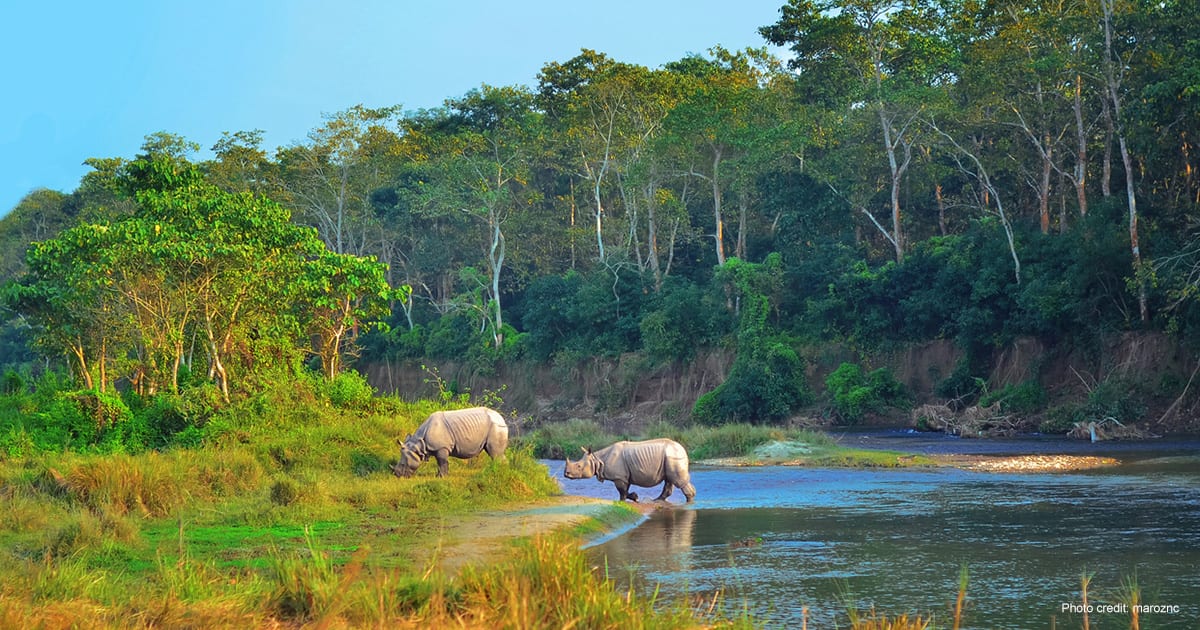 Despite the Covid pandemic (and unlike in Africa where poaching is driving rhinos toward extinction in the wild), 2021 has proved to be a good year for the Greater One-horned Asian Rhinoceros, aka Indian Rhinoceros (Rhinoceros unicornis), in Nepal.  An intensive three-week census (22 March – 10 April) this year indicates that the current number of rhinos in Nepal (752) has increased seven-fold since an alarm was raised in 1968 that the rhino was on the threshold of extinction in Nepal and there were no more than 110 rhinos in the country.

The concern regarding rhinos in Nepal stems not only from a conservation perspective but also reflects the Nepalese peoples’ emotional and cultural connections to the creature. For the people of Nepal, the rhinoceros is a mystical and legendary beast with supernatural power and strength. Celebrated in myth, story, and song and targeted by poachers because of the supposed psychotherapeutic powers of various body parts, Jung Bahadur, the first Rana Prime Minister of Nepal declared the rhino as the “Royal Animal” in 1846. The rhino has remained an iconic symbol of Nepal ever since.  Reverence for the rhino is particularly strong among the Tharu people—the indigenous inhabitants of the Terai— the hot and humid (and malarial) tropical eco-region that stretches along the southern border of Nepal.

As a result of the Tharu’s reverence for the rhino and the threat of malaria, both the animal and its habitat were protected, especially in the Rapti River Valley of Chitwan, a large tract of subtropical forests and savanna grasslands. Rhino hunting was also prohibited except for members of the Rana families. But their hunts were infrequent and had little impact on rhino populations. But then, in the 1950s, the Rana regime ended, a malaria eradication campaign was launched in the Rapti Valley and Chitwan and many landless people from the mountainous areas of Nepal were resettled in the Chitwan Valley. The local population in and around Chitwan suddenly grew from a few hundreds to thousands. Poaching became rampant and the Nepalese rhino population fell to an estimated 110 rhinos.

Fortunately, King Mahendra, who ruled Nepal from 1955 to 1972, became a strong supporter of conservation. He ordered the establishment of a national park in Chitwan in 1972 and set in motion a series of developments that have ultimately led to a resurgence of the rhino population in Nepal. Today, the Greater One-horned Asian Rhinoceros population has soared to what was, only a few decades ago, the unimaginable number of 752 rhinos, indicating that this pre-historic beast, named for the mythical unicorn, is more resilient than most of us imagined.

In 2015, when Nepal adopted a new constitution, politicians expected arguments over the rights of ethnic minorities and other contentious issues but they did not expect to have a fight over the designation of the national animal. Under the earlier constitutions, the domestic cow was designated the national animal, but the National Federation of Indigenous Nationalities argued that appointing the rhino as the national animal would appropriately reflect the new government’s secularism and further legitimize the country’s conservation efforts. This initiative failed but, while the Himalayan State of Nepal may rank among the most impoverished countries on earth, the lack of resources has not undermined Nepal’s political will to ensure that the rhinos of Nepal will not go extinct.

However, the question we now face is how long can this faith be sustained?

[Note: There are an estimated 3,700 Indian rhinos in the world today, up from around 1,900 in the early 1990s.  Nearly 85% of the population is concentrated in Assam, the Indian state bordering Nepal on the east.  The Kaziranga National Park contains around 2,000.]

[Note: Dr. Mishra was the first Executive Director of the National Trust for Nature Conservation in Nepal and was heavily involved in establishing the Nepalese system of national parks.]