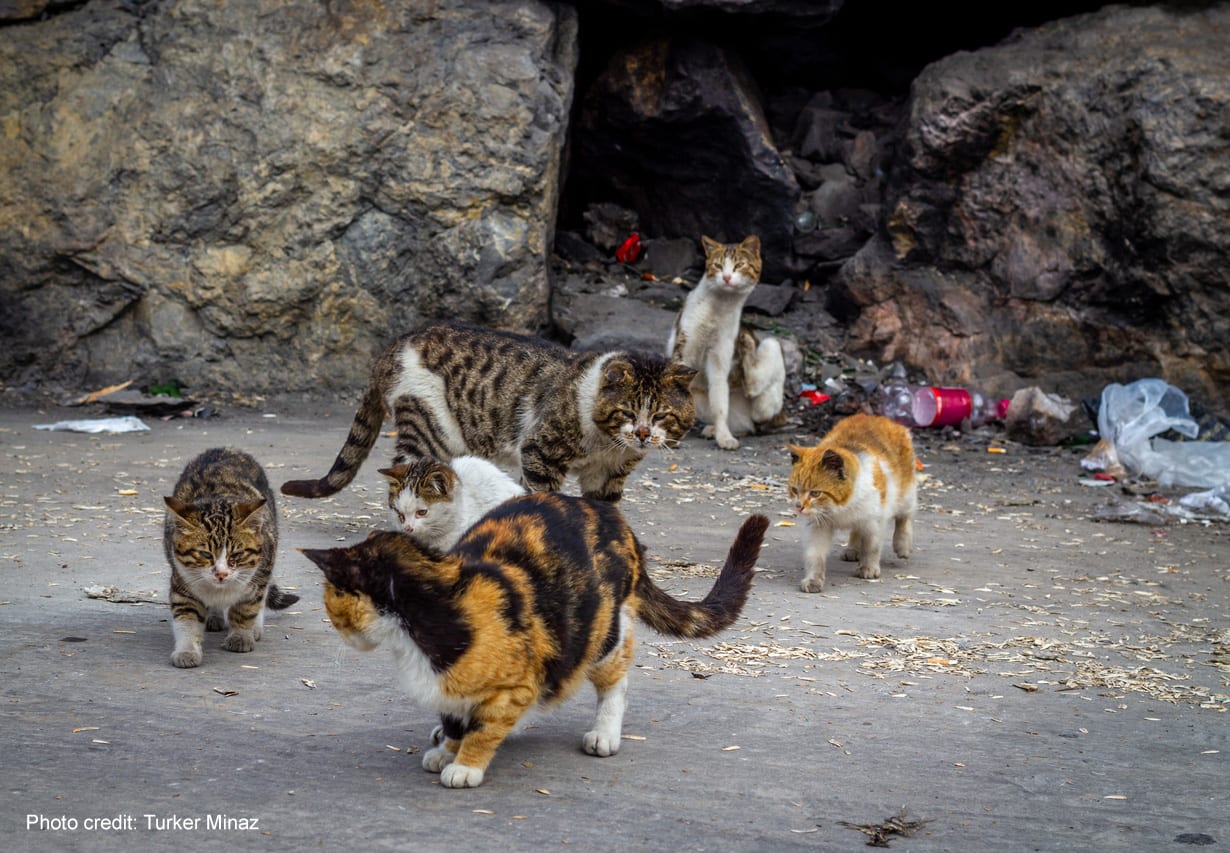 A 2019 paper in Science provides some additional context in reporting that the bird population in all of North America (including Canada) had dropped from 10.1 billion in 1970 to 7.2 billion in 2018. Before one immediately assumes this loss has been caused by cat predation, the largest losses occurred in North American grasslands (700 million birds) driven by habitat loss and toxic pesticide use, in forests (for example the huge Canadian Boreal forests and in Western forests) and in the Arctic tundra areas. There are very few domestic cats (perhaps 1 per square kilometer) in grassland and forest landscapes (see table), so cats cannot be blamed for the huge declines in total bird populations in those landscapes.

Meanwhile, estimating actual cat numbers, both owned and unowned, is fraught with challenges. Owned domestic cat numbers are determined by household surveys, but different surveys produce different numbers. For unowned, outdoor domestic cats, there are no reliable estimates total cats but there are indirect ways to estimate the overall population by looking at average cat densities in different landscapes.

The table below provides estimated numbers of owned, outdoor domestic cats based on a recent survey (American Veterinary Medical Association – AVMA, 2018). Numbers of unowned outdoor (stray and feral) domestic cats in the United States have been estimated using data from studies reporting cat densities in different landscapes around the world.  In the United States, the AVMA estimate of the owned cat population dropped from 81 million cats in 2006 (the figure used in the 2013 paper) to 58.4 million in the 2016 survey.  The AVMA lowered their estimate of owned cats because an examination of the survey results indicated that early survey respondents had far higher rates of cat ownership than later respondents. When that feature was factored into the analysis, the United States pet cat population estimate dropped by 29% to 58.4 million.

For outdoor, unowned domestic cats, the numbers in the table provide a low- and high-density estimate based on the many studies of domestic cat densities from around the world. The biggest variations occur in urban areas where cat densities from 20 to 2,000 per square kilometer have been reported. But most of the results for urban unowned cat density fall in the 50 to 100 cats per square kilometer value used in the table. The densities of domestic cats in rural areas and in national forests and national parks are far lower than those in urban areas. 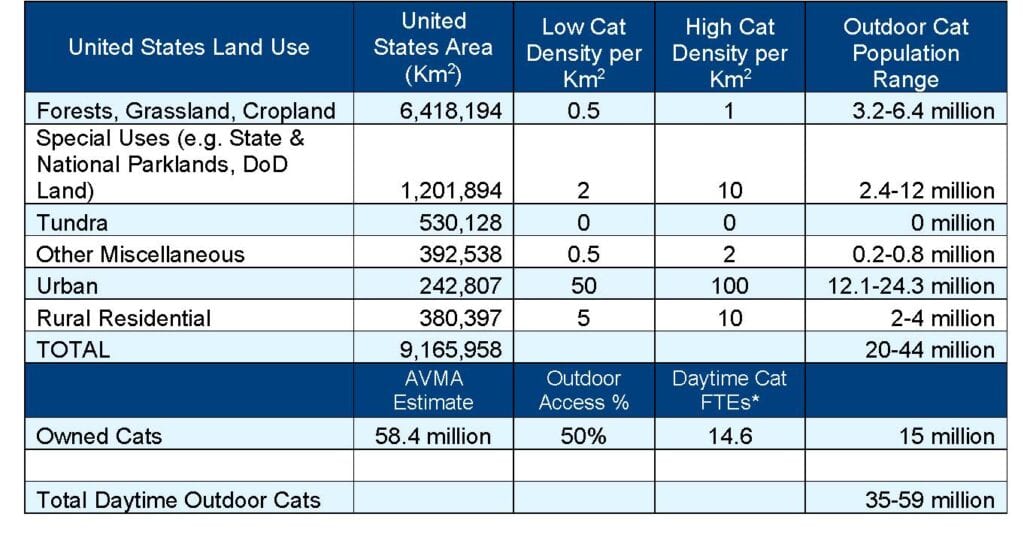 *FTEs are Full-Time Equivalents.  29.2 million owned cats with outside access for half a day on average would translate into 14.6 million full-time cat equivalents outside.

The original 2013 paper has been cited more than 600 times by other scientists since its publication (an excellent track record for a scientific paper), and their estimates have been so widely reported in the general media that the 1.3 – 4.0 billion birds killed estimate has now grown into an “established” fact whenever outdoor cats are discussed. However, we believe this estimate is too high, perhaps significantly so. Over-estimating outdoor cat numbers is common.

For example, in Australia, government sources originally reported (and the media amplified) that there were some 18 – 20 million feral cats in the country until a careful review of more than 90 field studies recalibrated that number at between 1.4 and 5.6 million cats in the bush! The low number occurred in drought years whereas the high number occurred in years with good rainfall seasons. The bottom line: estimating outdoor cat populations is not for the faint of heart.

The data on cat predation are also problematic and usually involve studies of prey brought home by owned cats (not accounting for prey eaten in the field) and are mostly based on very small samples of cats usually in urban or semi-urban settings. Now, a new study of cat predation out of the UK indicates that cat predatory behavior may, in act, be moderated by a range of measures, including some quite novel approaches such as providing better nutrition (higher animal protein content) or short periods of object play, perhaps dampening hunting enthusiasm. The study also allowed one to calculate annual cat predation rates. These British cats “only” brought home seven birds per year and these were the cats that were identified as hunters, many fewer than the average prey per cat assumed by the 2013 study. Only a small sample (10-20% of cats) typically account for most of the successful predation by cats and even that sample may be dominated by what some call “superpredators.”  If one could identify the successful hunters and manage their predatory behavior more effectively, it would produce significant benefits in cat predation.

Meanwhile, in the Greater Washington area, people interested in cats and cat predation are anticipating a report from the DC Cat Count that will provide careful estimates of pet and outdoor cats and their possible impact on wildlife populations. The project has already identified one important fact – there were very few domestic cats (either pets or feral cats) in the city’s largest parks. The city’s biggest and wildest land area, Rock Creek Park, was almost devoid of feral or pet cats.  Similar results were reported by Stan Gehrt in a study of cat-coyote interactions in Chicago. While the birds at bird feeders in Washington still need to beware of pet cats, those in the big parks appear to be safe from cat predation despite significant pet cat populations in the city.

Estimating domestic cat numbers and the number of prey caught by cats will be an ongoing challenge in debates over what we should do about outdoor cats. However, we would emphasize that differences over the estimates of outdoor cat numbers do not address the fact that domestic cats are efficient predators.  In the United States, animal protection organizations have been encouraging cat owners to keep their cats indoors (and that campaign is working) or to build “catios” where a cat may be outside but not able to prey on birds or other animals. In Portland, Oregon, the local Audubon Society and the Feral Cat Coalition of Oregon are working co-operatively to address the outdoor cat problem. But there are far too few joint projects involving both cat protection and wildlife advocates. This lack of collaboration needs to change if we are to identify and apply effective interventions that benefit both cats and wildlife.