History and Impact of The Johns Hopkins Center For Alternatives To Animal Testing: Developments For Humans And Animals In Safety Testing And Risk Assessment 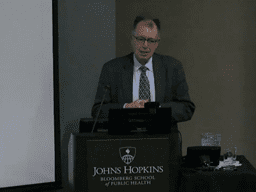 Andrew N Rowan speaking at Johns Hopkins School of Public Health and Hygiene on November 28, 2018, on the Impact that the Center for Alternatives to Animal Testing has had on the field since its founding in 1981.  View presentation.

In 2007, the National Research Council in Washington, DC produced a report on Toxicology in the 21st Century. This report proposed a new paradigm for determining chemical safety and risk that would no longer rely on animal testing. In the first year or so after the report was produced, there was a great deal of skepticism about the vision presented but, ten years later, the Society of Toxicology had organized three FutureTox symposia to explore not “if we could achieve the vision” but “how soon it could be achieved.”
In April of 2016, Dr. Francis Collins, the NIH Director, presented ten bold predictions to the Appropriations Committee of the US Senate. One of these was that new non-animal technologies would “mostly replace animal testing for drug toxicity and environmental sensing, giving results that are more accurate, at a lower cost, and with higher throughput.” Almost one-third of the world now lives in countries where the sale of cosmetics tested on animals is banned, and, in October 2018, one of the largest companies producing personal care products (Unilever) announced that it is supporting the call to end the animal testing of such products.
Translate »
Manage Cookie Consent
We use cookies to optimize our website and our service.
Manage options Manage services Manage vendors Read more about these purposes
Preferences
{title} {title} {title}