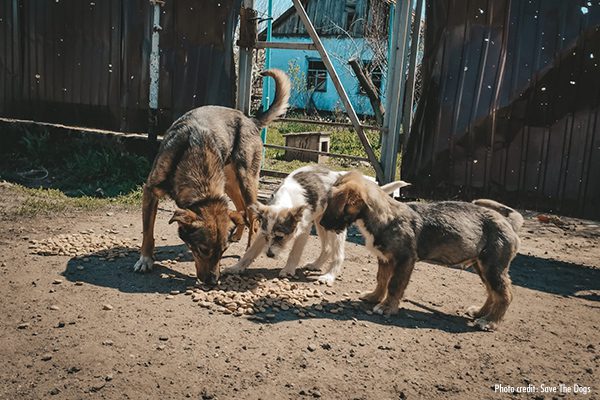 WellBeing International heard yesterday from Gregg Tully, the Country Director of Save the Dogs and other Animals in Romania and a partner in the U3R consortium, who reported the following:

“The need for pet food in southern Ukraine has become overwhelming. Many people who fled the country left their pets behind, and many of the people who fed street dogs and cats every day also left, resulting in far more animals roaming the streets and far less food. One of our contacts in Mykolaiv said, “It is no longer possible to count the number of abandoned animals.”

Gregg also noted that Save the Dogs and other Animals:

“has increased their pet food donations to Ukraine and expanded the area they’re supporting. Instead of delivering one or two tons a week, the organization is now sending 15 tons at a time, and next week the organization will send 20 tons to Odessa where the recent attacks have made the need even more urgent.”

Please consider donating to purchase food and supplies for the animals remaining in Odessa and in Ukraine. Thank you,

Members of the Ukraine Rescue, Relief & Rebuild (U3R) consortium include Save the Dogs and other Animals, The Street Dog Coalition, Tigers in America, and WellBeing International.

The people and animals of Ukraine desperately need your support for food and supplies. Ukraine Rescue, Relief & Rebuild (U3R) brought together a consortium of implementing, intelligence, and resource partners to respond more quickly, effectively and efficiently to the ever-changing conflict.