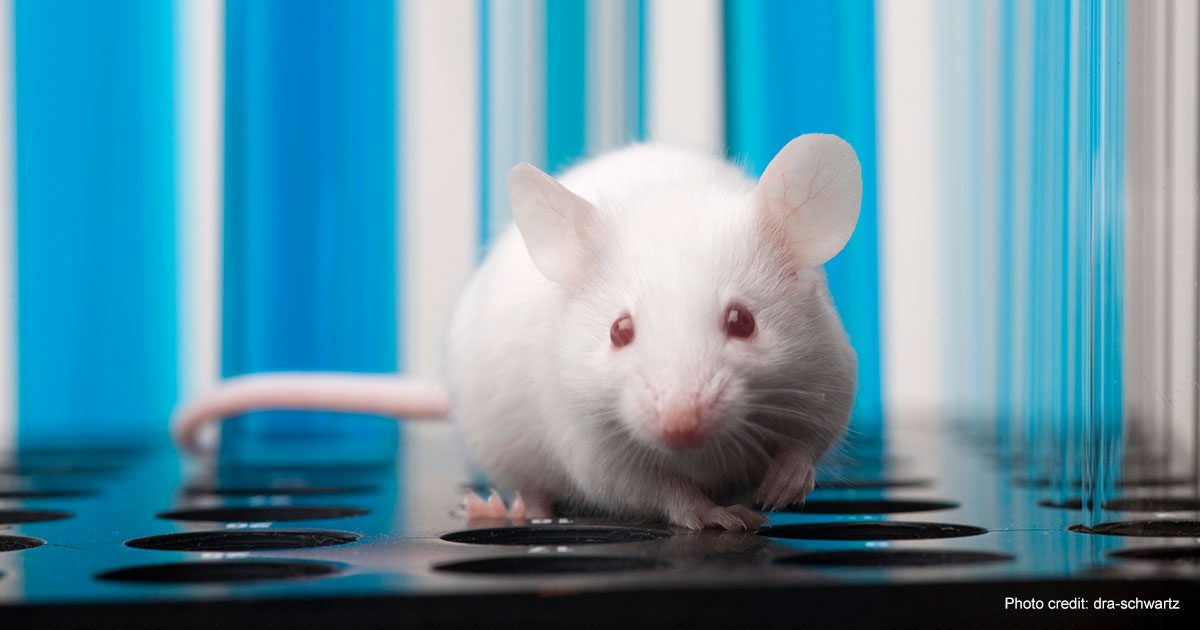 In 1993, the NIH Revitalization Act included language, supported by corporations and animal advocates, that authorized a new program to develop and validate toxicity tests that would replace and reduce the use of laboratory animals. Seven years later, that 1993 Act led to the passage of the 2000 ICCVAM Authorization Act. This act established the Interagency Coordinating Committee for the Validation of Alternative Methods (ICCVAM) to facilitate the development and implementation of alternative methods that would replace or reduce the use of animals in safety testing and risk assessment. ICCVAM started slowly, but twenty-one years after its formal launch, it is now delivering significant progress in replacing animal tests. 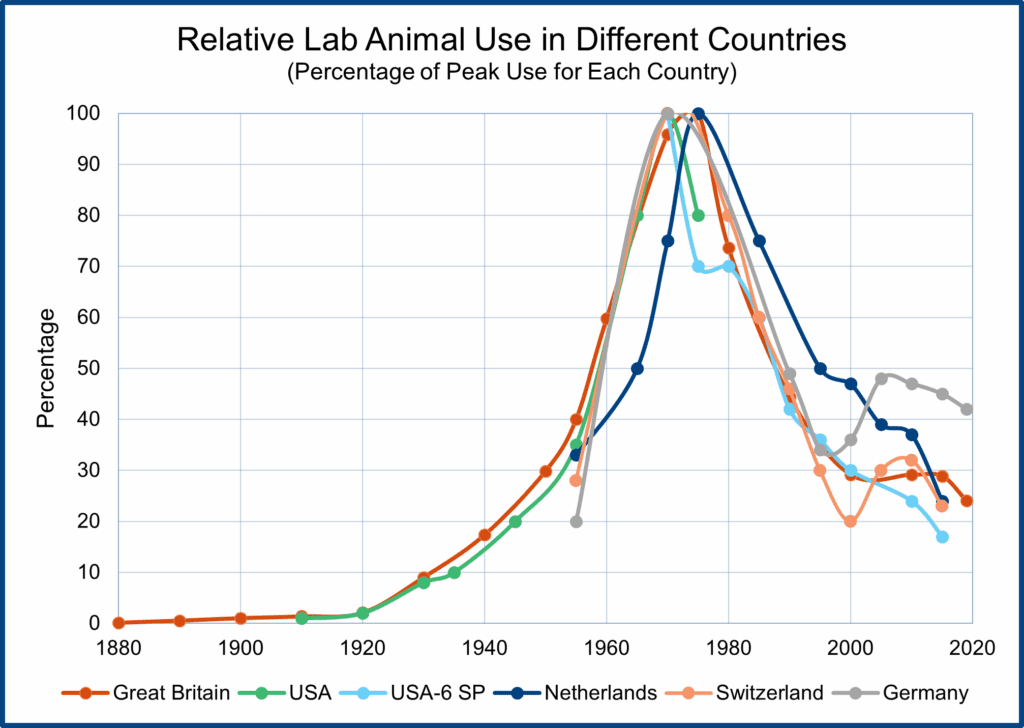 As the figure shows, total laboratory animal use has followed roughly the same trajectory in all five countries. Animal use rose sharply after World War I, peaking in the 1970s, followed by a rapid decline and then a plateauing of animal use for around fifteen years (because of the breeding and use of genetically modified mice). Since 2015, total laboratory animal numbers have begun to fall again because new non-animal technologies (e.g., human organoids and human organs-on-a-chip) are replacing the use of genetically modified mice and other animals. 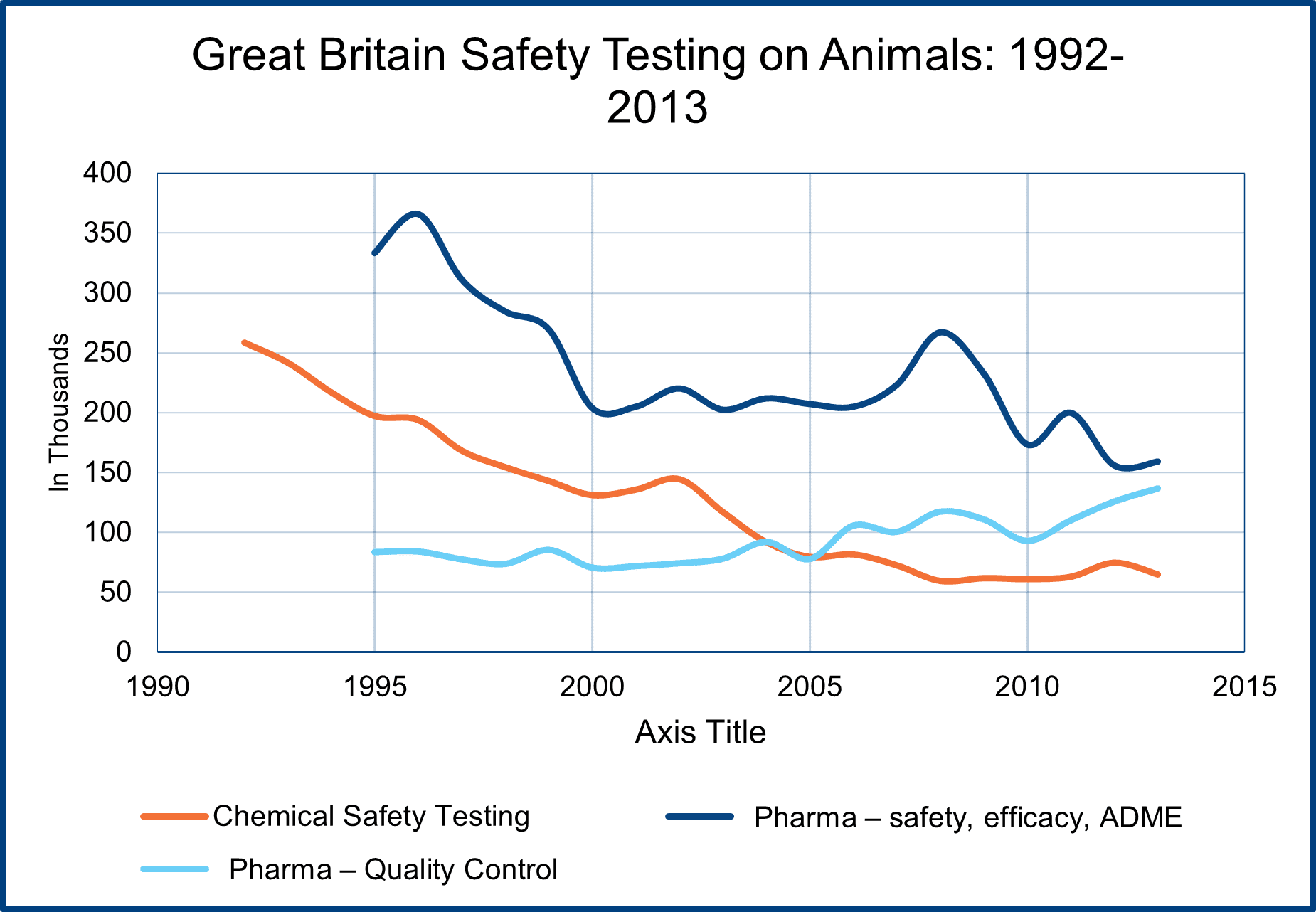 Toxicity testing, which can include identifying the hazard of a chemical and determining the risk a specific chemical poses to humans and the environment, has usually been a relatively small percentage of total laboratory animal use, accounting for 10-15% of all such use. The British reports on laboratory animal use for toxicity testing indicate what has been happening in this sector (see chart).

Acute toxicity tests (lasting one to two weeks) account for large numbers of animals killed annually for the last 50 to 75 years. Such tests include the determination in animals of three lethal doses (acute inhalation, acute oral, and acute dermal) plus primary eye irritation, primary skin irritation, and skin sensitization (an allergic reaction). The good news is that ICCVAM is now close to announcing satisfactory non-animal replacement tests for all six of these animal tests. Because the membership of ICCVAM includes all the major federal agencies using toxicity data, likely, these agencies will rapidly accept the new tests.

The acute oral toxicity test (LD50 or Lethal Dose 50 Percent) has long been a target for replacement by animal advocates and has also been criticized by an increasing number of toxicologists. The test was initially developed in 1927 to standardize biological reagents but has become pressed into service as one of the basic tests for chemical toxicity. However, many external factors affect the LD50 value, and calculated values can vary by order of magnitude, even when the test is repeated in the same species. The LD50 test provides only a crude estimate of human toxicity and causes significant animal suffering.

In the last few years, ICCVAM has supported an international consortium of 35 internationally renowned groups to develop an in silico model capable of predicting oral LD50s. The resulting CATMOS consensus model rapidly predicted the LD50s for 48,137 chemicals of interest to regulatory agencies and stakeholders. Another in silico system that predicts a range of acute toxicities (currently using around 600,000 animals a year in the EU) is being marketed by Underwriters Laboratories.

Another promising development in the animal testing arena is the rapid drop in the number of rabbits used for pyrogen testing in the EU. Ten years ago, around 170,000 rabbits were being used annually in the EU to test for the pyrogenicity of medical supplies designed to be infused into humans. In 2017, the number of rabbits used for this purpose had dropped to 35,000, and the European Pharmacopeia is now taking steps to phase out rabbit testing. The non-animal alternative using human blood cells outperforms the rabbit test and the LAL test (using horseshoe crab blood). Still, it is disturbing that it has taken 25 years to develop the alternative to reach this stage.

Step by step, animal testing is being phased out. In 2007, when the National Academy of Sciences produced its report on Toxicity Testing in the 21st Century, I predicted that animal testing would be mostly phased out by 2025. It now looks like I need to revise that estimate – perhaps to 2035, the year the EPA set a target of ending toxicity testing on mammals. It is always dangerous to make predictions (especially in the future!), but the trends are clear. Animal testing will come to an end partly because of ethical issues but more likely because it is expensive, time-consuming, and not particularly good at predicting human risk. There are over 100,000 chemicals in human commerce and a global capacity to thoroughly test perhaps 100 of those chemicals for a range of human toxicities using the classic laboratory animal systems. We need hazard identification approaches that are much (!) faster, less expensive, and better at predicting human outcomes.