A relatively recent saying, attributed to many different people, is that “prediction is very difficult, especially if it’s about the future.”  In contrast, Peter Drucker, the global management guru, is quoted as saying that “the best way to predict the future is to create it.”  One way to “create” the future is to persuade people at all levels (whether leaders or ordinary members of the public) to drive demand that creates change. The current pandemic is projected to cost between $8-16 trillion according to a recent report from the Intergovernmental Science-Policy Platform on Biodiversity and Ecosystem Services (IPBES). Given this cost estimate, perhaps it is time to call on individuals to flex their consumer and political muscles to push for greater progress in some other critical areas. For example, below are several topics on which major global institutions have made prognostications where the world badly needs to push for faster change.

Most of the world accepts that we are in the midst of a climate change crisis that will, or already has affected global weather patterns, food production and human existence in many adverse ways. As a result, global efforts to reduce carbon emissions to try and keep global warming under certain limits have been picking up steam. It is generally agreed that shifting to renewable energy sources (e.g. wind, solar, hydro-electric) will be an important part of reaching “peak carbon” emissions and reversing the warming trend if possible. However, the International Energy Agency (IEA) has consistently been badly off in its projections of the uptake of renewable energy until this year. In its latest projection, the IEA is finally beginning to climb onto the renewables bandwagon. But why should it have taken them so long to recognize the latest trends or to address the errors in their earlier forecasts?  The current rapid expansion in solar and wind installations is probably due to the significant fall in the price of photovoltaic (PV) cells (dropped by 82% from 2010 to 2019) as well as wind energy infrastructure and a commensurate increase in production volumes. The falling prices then stimulate increased demand producing an accelerating feedback loop.

In June of this year, the EU announced its Green Deal in which it aimed to be climate neutral by 2030. In September, China (the world’s biggest coal user and largest producer of carbon dioxide – 28% of the global total) pledged to reach a peak in carbon dioxide emissions by 2030 and to be carbon neutral by 2060. Nonetheless, energy infrastructure has considerable built-in inertia, and it will be a significant challenge to transition rapidly to a global energy system that is based on renewables, battery storage, carbon capture and storage, and some version of nuclear. As the world deals with the current pandemic and the huge investments (trillions of dollars) needed to deal with it, individuals, as members of the global public, should launch an increased demand to invest similar commitment and resources to convert the world much more rapidly from carbon-intensive energy systems to renewables.

The United Nations Population Division (UNPD), established in 1950, produces data on future global populations out to the year 2100. In the 1950s, its early predictions of global population for 1990 were off by 12%. But, by 1960, their predictions were off by only 2% and they have been pretty close since then. They are now attempting to predict when human population will peak and at what level. The chart below comes from the UNPD website. It shows the range of the probable total human population in 2100 with the median variation (the solid red line) approaching a peak of 11 billion by 2100. But look at the projection if fertility dropped by an average of 0.5 children per woman. The global population would peak around 2055 at around 9 billion and would be back at the current population by 2100. 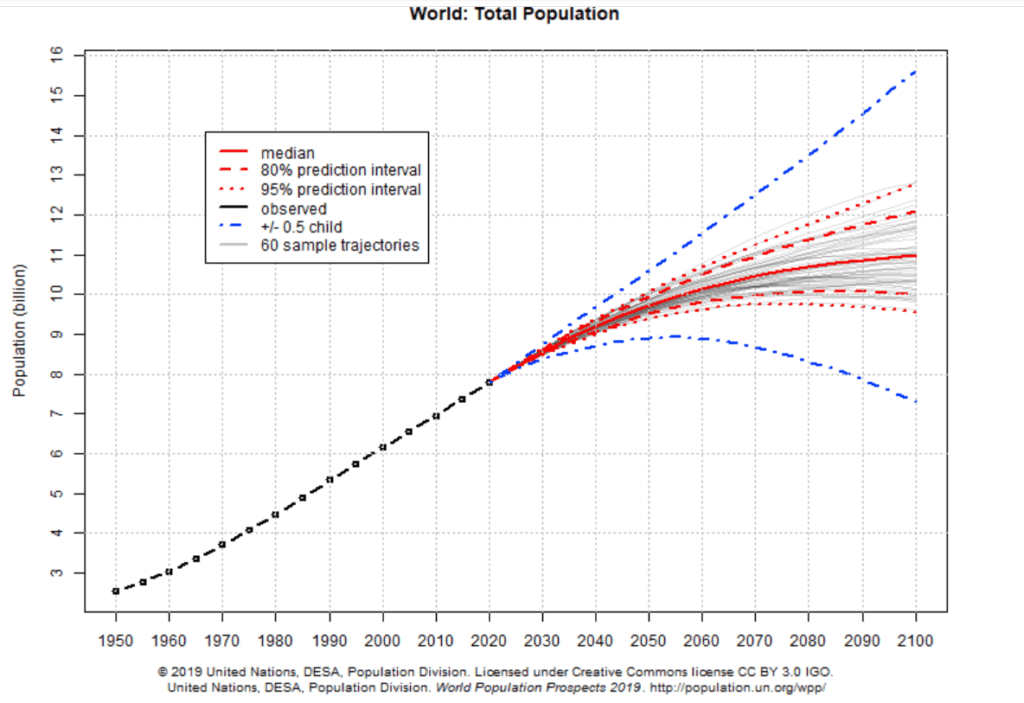 It certainly seems as though it would be a worthwhile goal to pay much greater attention to human fertility patterns and determine what it would take to decrease global fertility from its current rate (around 2.4 births per woman) to a level producing a smaller human population sooner than the median prediction. Globally, around 40% of pregnancies are unintended. Therefore, the reduction of the number of children per woman by 0.5 is not an unrealistic target leading to the lower curve in the figure. However, the lower fertility rate would be accompanied by a shift to an older population structure that would produce many challenges, but these should be easier to address if the global population peaked at 9 billion rather than 11-12 billion!  Therefore, the allocation of resources to meet the demand to prevent unintended pregnancies, would be a clear path forward in providing an important solution to this global challenge.

The Food and Agriculture Organization (FAO) has reported that world meat production is projected to double by 2050. This projection has been reported widely in the media. Currently, 35.5% of the world’s habitable land is devoted to producing meat and animal products – mostly to grow corn and soybeans to feed to animals housed in intensive confinement. A doubling of meat production would require that 71% of all of the earth’s habitable land be committed to meat production by 2050 leaving only 29% for humans to live and grow crops, for forests and for the dwindling populations of wild animals. This statement that meat production will double seems intuitively to be an unsustainable claim. It would certainly result in the elimination of most wilderness areas, a significant reduction in global forests and a continuing reduction in the world’s wildlife.

One wonders if the experts at the FAO (and they do have considerable expertise) ever considered the implications of their statement that meat production would double. It is true that, as global prosperity increases, meat consumption tends to increase. China is the posterchild for this having increased per capita meat consumption from around 12 kg to 60 kg in the last 60 years, but Chinese leaders have recently proposed to halve individual meat consumption. The USA, currently at a meat consumption of 120kg per capita (twice China’s), is not discussing any similar policy initiatives despite the fact that such high meat consumption appears to have significant adverse public health consequences. Just because current trends point to a doubling does not mean that we simply should accept such a doubling and its global consequences as inevitable.

Given this, how should we address what appears to be a claim that would require a huge change in humanity’s engagement with the environment by 2050?  If instead, we as individual consumers and drivers of demand, change our consumption choices to more sustainable diets, then we could move closer to a situation that would prevent the loss of our current forests and wilderness areas. Even minor changes by individuals on a global scale could have significant positive impacts.

With the increasing availability of information for most of the world, why does it take so long to recognize trends and challenges and then to take appropriate action?  Although vested interests and inertia in retooling infrastructure are certainly factors supporting the status quo, global citizens have increased access to information to assist in making individual choices. We all need to take informed actions to affect demand and drive the policy changes needed to reach long-term, sustainable solutions.