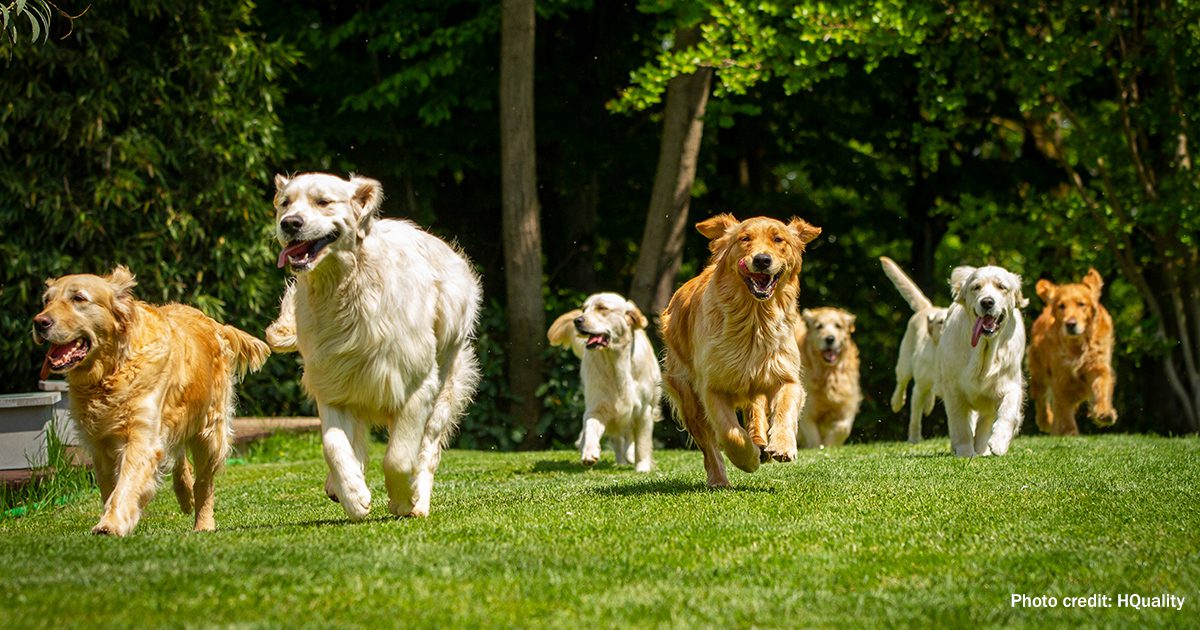 To the surprise of many animal advocates, discussions are taking place this year on whether there may be too few dogs to support demand in the US. The campaign that began in the 1970s to reduce dog over-supply has been very successful. In 1973, approximately 7 million dogs were euthanized in shelters when the pet dog population was around 35 million. In 2021, 300,000 dogs were euthanized in animal shelters, but the pet dog population had grown to somewhere between 65 and 90 million, depending on which survey is consulted.  Although 300,000 is still too many dogs, it represents more than a 95% reduction in the euthanasia of shelter dogs.

Juxtaposed to the discussions (and lack of consensus) on the supply of pet dogs are other concerns regarding humane methods of dog breeding and puppy production. The breeding of pet dogs (and cats) for the pet market is also a controversial issue. Nearly a decade ago, the Croney Research Group at Purdue University began researching humane standards for dog breeding with the intent that these standards would result in dogs better prepared to be pets.  When Dr. Croney and her group began the project, there was minimal research looking into how best, for the dogs and future owners, to increase the supply of puppies that would grow into successful pets.  Then, in 2020, the Functional Dog Collaborative (FDC) was launched by veterinary geneticist Jessica Hekman as an initiative to build a new culture of dog breeding focused on a dog’s physical and behavioral health whether they are pure-bred or mixed breed.

Since April 2022, three conferences have addressed the suggested shortage of pet dogs. Those conferences included the Animal Care Expo in Orlando, Florida (in April 2022), a conference organized by the Association for Animal Welfare Advancement and sponsored by PetSmart Charities in Chicago (in June 2022), and a conference on the humane breeding of dogs at Purdue University (also in June 2022). Not all animal advocates, perhaps not even a majority, are convinced that there is or might be a dog shortage in the US.

One might think that it should be a simple matter to calculate how many pet dogs there are in the US at any time. However, this calculation is neither simple nor straightforward. First, there is little consensus on the size of the pet dog population in the country. Second, determining how many dogs die yearly (referred to as the annual turnover) is challenging. Third, there is little available information on the number of puppies needed and who produces those puppies to support the yearly demand for pet dogs. 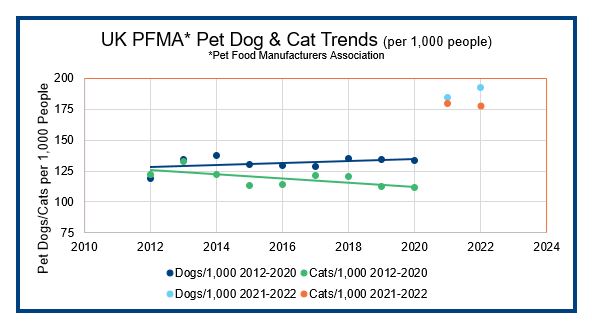 Currently, three regular surveys (conducted every five years by the American Veterinary Medical Association, every two years by the American Pet Products Association, and every year by Simmons for Packaged Facts) provide estimates of the US pet population. The three estimates disagree (sometimes, by a considerable extent) on the percentage of homes that have pets and how many pet dogs and cats there are in the country. Each organization uses different survey technologies and strategies, and there are indications that the survey technologies used (e.g., online, household panel, and random digit dial) produce consistently different results. Random digit dial and face-to-face surveys produce the lowest estimates, while online surveys produce the highest. There has, to date, been no meaningful discussion on why the various survey technologies lead to different estimates. The chart shows the impacts on the estimated pet population in the UK when the survey technology changed from face-to-face to online in 2021.

The wide range in pet population estimates (e.g., from 65 to 90 million pet dogs in the US) also affects the estimated supply and demand calculations for pets in the US. It is generally agreed that pet dogs die, on average, at around 11 years of age. Therefore, if one considers replacing only the pets that die, approximately 9% of pet dogs (i.e., 5.85 to 8.1 million pet dogs) would have to be replaced to ensure that the total dog population does not decline. However, the US pet dog population grows at around 800,000 dogs per year and closely tracks the increases in the US human population and number of households. In other words, the US needs from 6.7 (5.85 + 0.8 million) to 8.9 million puppies (or adult dog imports from outside the US) every year to maintain its pet dog population and support the annual growth in the number of pet dogs.

None of the three conferences in 2022 produced a broadly agreed estimate of the total US pet dog population. But there were some interesting new observations. For example, one of the pet industry attendees at the Chicago conference estimated that pet stores might handle and sell around 200,000 puppies a year (3% of the actual need). Another presenter suggested that shelters may provide only about 5-10% of the puppies entering US homes annually. Therefore, these two sources (retail pet stores and shelters/rescues) provide less than 15% of the puppies needed to meet annual US demand. Developing a better understanding of the sources of the puppies required to satisfy the national demand for pet dogs will be essential if we are to address the dog supply-demand issue effectively.

Other possible sources of puppies include commercial breeders who sell direct to the public (i.e., not via pet stores), hobby breeders who sell directly to the public, puppies from pet dogs,  and imports of puppies (or adult dogs) from outside the US. US shelters are, as noted above, not a significant source of puppies (they provide possibly 10% of the annual demand). Most of the dogs handled by US shelters and rescues (maybe 90%) are dogs being “recycled” from an existing home to a new home.

The claim that the US is nearing a dog shortage seems ridiculous when animal shelters and rescues continue to take in millions of dogs a year. However, today’s situation is significantly different from fifty years ago. Today, only about 5% of dogs pass through a shelter/rescue annually, a tiny fraction is euthanized, and the rest are recycled into new homes. In the past, approximately 20% of the US dog population passed through animal shelters annually, and most of those were euthanized because homes could not be found. Euthanasia numbers in shelters and rescues have declined dramatically from approximately 7 million dogs (i.e., 20% of the pet dog population in 1973) to around 300,000 today (less than 0.5% of the current pet dog population).

Therefore, dog (and cat) supply for the pet market is much tighter today than fifty years ago. The only country that has looked carefully at recruitment into the pet dog population is Japan. In that country, the number of puppies produced has dropped from around 500,000 annually to 300,000 (reportedly because, in 2006, the government established stricter registration requirements for individuals and companies breeding dogs). The idea that there may be a supply shortage is bolstered by surveys that report the Japanese pet dog population has also dropped from 12 million to 10 million since 2006. The Japanese cannot make up for the shortfall in pet dog supply by importing dogs from outside Japan because Japan is a rabies-free country, and the authorities would like to maintain that status. Therefore, importing dogs to make up for the shortfall is not easy. By contrast, the US Centers for Disease Control reports the number of dogs imported into the US rose from around 400,000 in 2005 to 1.06 million in 2019. This increase also supports the argument that there is currently a shortage in the domestic supply of pet dogs.

The Functional Dog Collaborative was launched because some animal advocates had noticed an increase in dog behaviors that reduced the suitability of dogs as pets. Purdue University was also seeking to improve the “pet” quality of the dogs produced by breeders. The breeders at the 2022 Purdue University conference were very enthusiastic about the standards being developed and applied by the Purdue team. One breeder commented that his customers were so pleased with the quality of the dogs he provided that they had vowed never to get a puppy from anybody else.

No agreement was reached at any of the three conferences on whether or not there is a sufficient supply of dogs to meet the demand for pet dogs. However, the heightened attention to the supply/demand issue should lead to a clearer picture of pet dog supply and demand in the next year or two. Meanwhile, the research conducted by the Purdue team is leading to improvements in the quality of puppies produced by commercial breeders and to more humane breeding practices that lead to dogs that are better pets. There is certainly public demand for new approaches.  The FDC has engaged with a diverse group of leaders from animal welfare, animal behavior, and veterinary fields and their 28 podcast episodes have been downloaded almost 70,000 times.