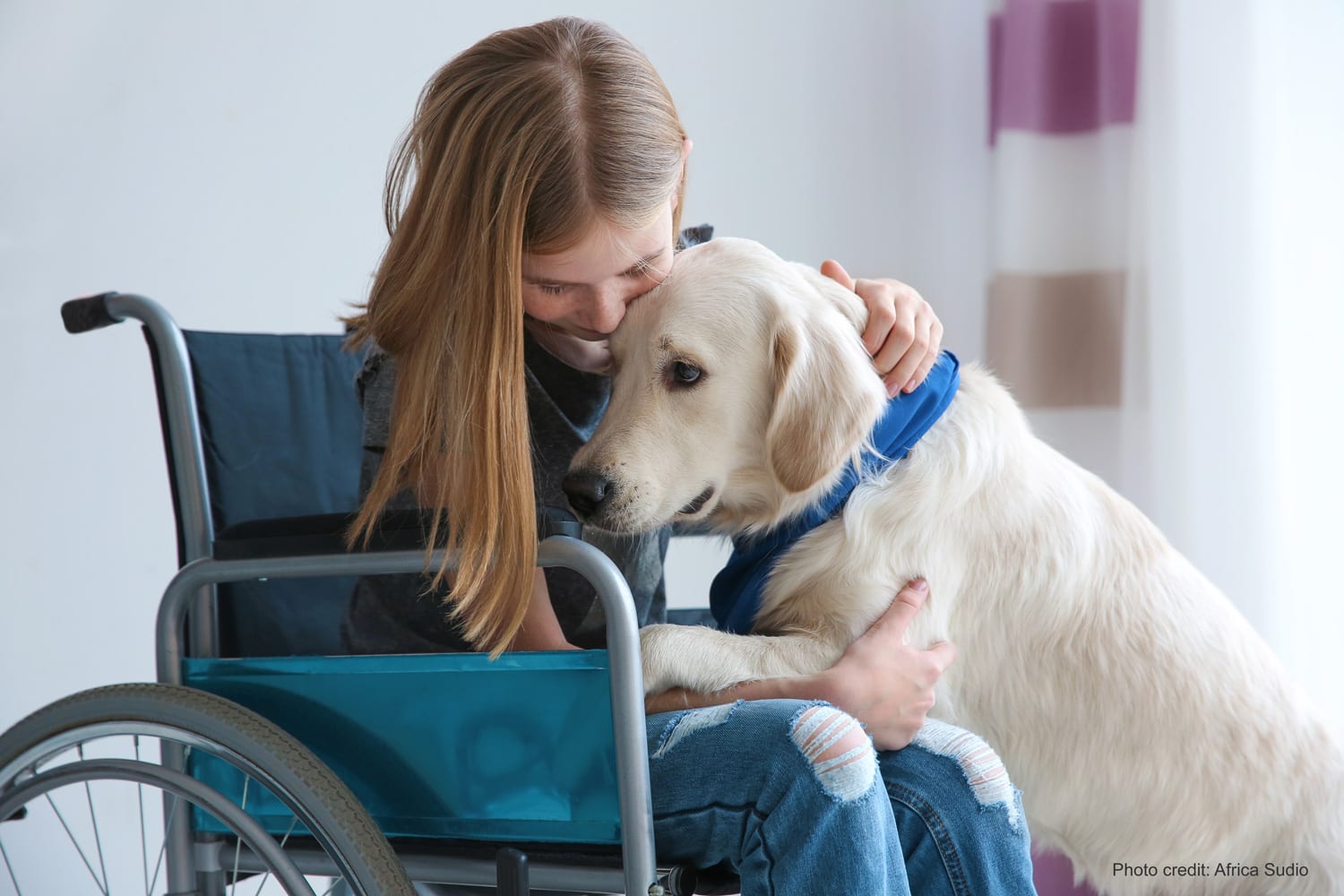 Today, it is not unusual to see assistance dogs in stores, restaurants, on public transportation and in the workplace assisting their human partners to overcome the boundaries that their disabilities present. Presently, there are approximately 30,000 actively working assistance dogs making the world a better place for their partners with disabilities (and see WBI’s previous story on assistance dogs for veterans). This begs the question; “Who were the first canine pioneers who paved the way to well-being by showing us the positive impact that an assistance dog can have?” 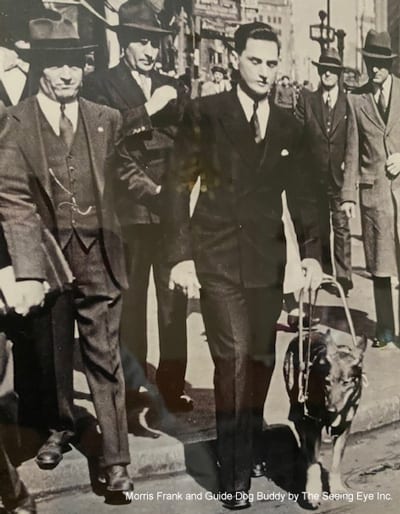 In 1927, a young man from Nashville TN, Morris Frank, learned about dogs being trained in Germany to help soldiers who had been blinded in WWI. His father read an article in The Saturday Evening Post about “Seeing Eye Dogs” to his son, as he was blind due to two accidents. Morris wrote to the author of this article, Dorothy Harrison Eustis, an American dog breeder and trainer living in Switzerland, and asked that she train a dog to help him navigate his environment. She had never trained a dog like this before but agreed to give it a try.

In 1928, at the age of 20, Morris Frank found himself in Switzerland being introduced to a beautiful female German Shepherd named Kiss. It was love at first sight, but he decided to change her name to Buddy as he could not see himself returning to America and calling her Kiss. After six weeks of team training together, Morris and Buddy returned to America where a throng of reporters were amazed by Buddy as she guided Morris seamlessly through the busy streets of NYC. They became Ambassadors for guide dog use and together with Dorothy Eustis, founded the Seeing Eye Dog Program whose headquarters are located in Morristown, NJ.  Morris Frank went on to have a total of six guide dogs in his lifetime and they all were named Buddy.

In 1969, 16-year-old Linda Pritchard from Denver Colorado received a female German Shepherd as a pet. Linda named her new pup Skippy and found that she naturally sensed that her human partner had a severe hearing loss. If Skippy heard an unusual sound, she would put her paw on Linda to alert her that a door was banging, or a window was open. Her parents decided to hire a professional dog trainer, Sally Terroux, to extend Skippy’s innate sensitivity to Linda’s deafness. She trained Skippy to alert her young partner to a variety of sounds such as an alarm clock, a door knock, a whistling tea kettle and a smoke alarm. Skippy connected Linda to her soundless environment. Skippy also was trained how to behave in public in order to gain access to public places granted under Colorado state law. At age 24, Linda would bring Skippy to work at the bank with her and on several occasions, they flew together to other states.

Due to the success of Hearing Dog Skippy, Linda was often asked to talk to reporters about the impact her hearing dog had on her life.

Hearing about this special “Hearing Ear Dog” the Director of the American Humane Association (AHA) reached out to Linda and Skippy. That meeting inspired the AHA to establish the first Hearing Dog Training Program in 1977 to determine if dogs could become the “ears” for those who were deaf, just like guide dogs had became the “eyes” for those who were blind. Master Trainer Agnes McGrath was hired to develop and run this program that continued to place Hearing Dogs until 1985 and then helped form Assistance Dogs International.

As Guide Dog teams and programs continued to multiply in the US and Hearing Dogs were becoming more widely accepted, a new Assistance Dog called a Service Dog was introduced by Dr. Bonnie Bergin, founder of Canine Companions for Independence in California. When visiting Asia, Dr. Bergin saw a paralyzed man leaning on his donkey to get from place to place. She immediately thought, “Dogs can do this.” When she returned to the states in 1975, she founded a training program to determine how dogs could assist those who were disabled.

A black Labrador /Golden Retriever mix named Abdul, which means helpful servant, was the first dog to graduate as a Service Dog. He excelled at picking up dropped items, turning on light switches, carrying items and opening and closing doors.

He was matched with a young woman, Kerry Klaus, who used a wheelchair. Abdul became nationally recognized as the first Service Dog in the US. Once again people were amazed at what a well-trained dog could do to make the lives of their partners better and the demand for Service Dogs grew.

Buddy, Skippy and Abdul were the canine pioneers of the Assistance Dog Industry in the United States. With their exemplary training, gentle temperaments and devotion to the well-being of their human partners, they paved the way to launch an industry that has now placed Assistance Dogs in all corners of the globe.

Thanks to these special dogs, their trainers and partners, Guide, Hearing and Service Dogs have helped tens of thousands of people gain their independence to live their best lives ever.

Sheila O’Brien is currently the Chair of the North American Region of Assistance Dogs International and a Special Advisor to America’s VetDogs and the Guide Dog Foundation.