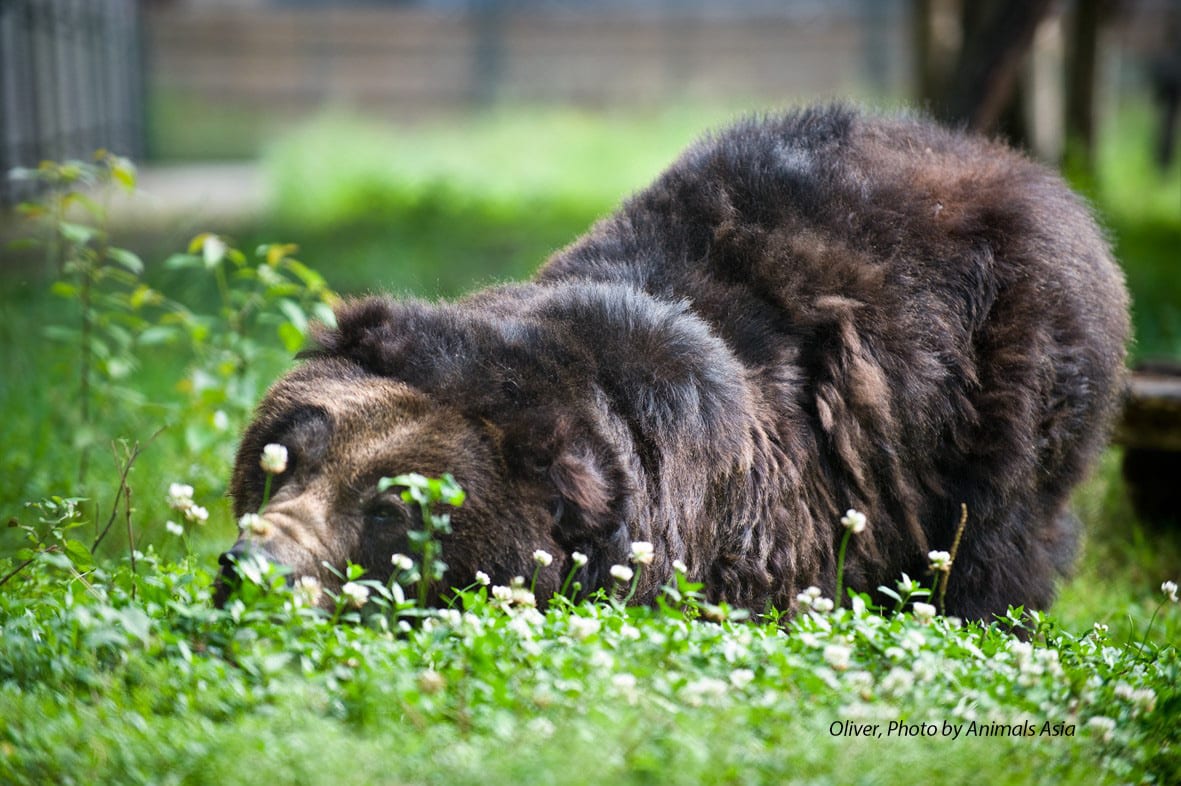 Posted at 14:50h By Kathleen Rowan

On November 12, 2014, Oliver, an Asian Brown Bear, died in the Animals Asia bear rescue center in Chengdu, China. Animals Asia, who rescued Oliver from a desperate situation in a bear bile “farm” in Shandong, China in 2010, was around 37 years old when he died. But he had spent 30 of those years (the average lifespan for a brown bear) locked in a crate with a catheter extruding from his gall bladder through the skin to drip bile into a cup. His body was deformed after spending 30 years immobilized in a metal cage and the Animals Asia team were not sure he would survive the 1,500-mile trip to the sanctuary in Chengdu. In fact, the veterinary team looking after Oliver on the trip decided he had to have emergency surgery simply to survive. As Jill Robinson, Animals Asia founder. commented, “He was an old bear who had suffered more than anyone can imagine but it just didn’t seem right that he should be so close to freedom and not make it.” 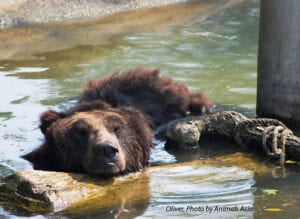 Under local police escort, the convoy of trucks carrying Oliver and nine other rescued bears detoured to a provincial hospital to borrow a bottle of oxygen needed for the operation. Then, amid huge crowds of concerned onlookers, Oliver underwent four hours of surgery to remove his diseased gall bladder and the metal coil that had been inserted to keep the gall bladder fixed to the abdominal wall. Being the survivor that he was, he came through the surgery and made it to the sanctuary where he spent another four and a half years enjoying the grass, his pool and his freedom to move around his enclosure. Being a survivor gave Oliver some latitude with his behavior. For example, he put his “paws down” when he had to be sprayed with topical antibiotics to treat superficial wounds!

The drama of Oliver’s rescue and surgery brought many people together that day, both in China and across the world. Since then, according to Animals Asia, Oliver has continued to be a celebrity bear and ambassador for the thousands of other bears still languishing in bile “farms.” Visitors to the sanctuary marveled at what he had suffered during his 30 years of incarceration and responded strongly to his obvious enjoyment of his time at the sanctuary. Following his death, Animals Asia was flooded with messages of condolences and support as people shared their stories of what Oliver had meant to them.

So, on this November, spare a thought for Oliver, the brown bear who suffered unspeakably for 30 years but who spent his last four and half in peace and comfort and recruiting supporters from across the world to his cause. Oliver’s rescue was told in the documentary, Cages of Shame (see trailer), by Martin Guinness.

Animals Asia was established in 1998 but the core team had been rescuing bears since 1994. The organization has three main programs – ending bear bile “farming” (Vietnam signed an MoU with Animals Asia to end such farms by 2022), cat and dog welfare (including campaigning against the consumption of dog and cat meat), and captive animal welfare. Its founder, Jill Robinson has been widely recognized as the main advocate on behalf of bear welfare and against bile “farms”. In 1998, she was awarded an MBE by Queen Elizabeth in recognition of her services to animal welfare. Animals Asia estimates there may be as many as 10,000 bears housed in bear bile “farms.”