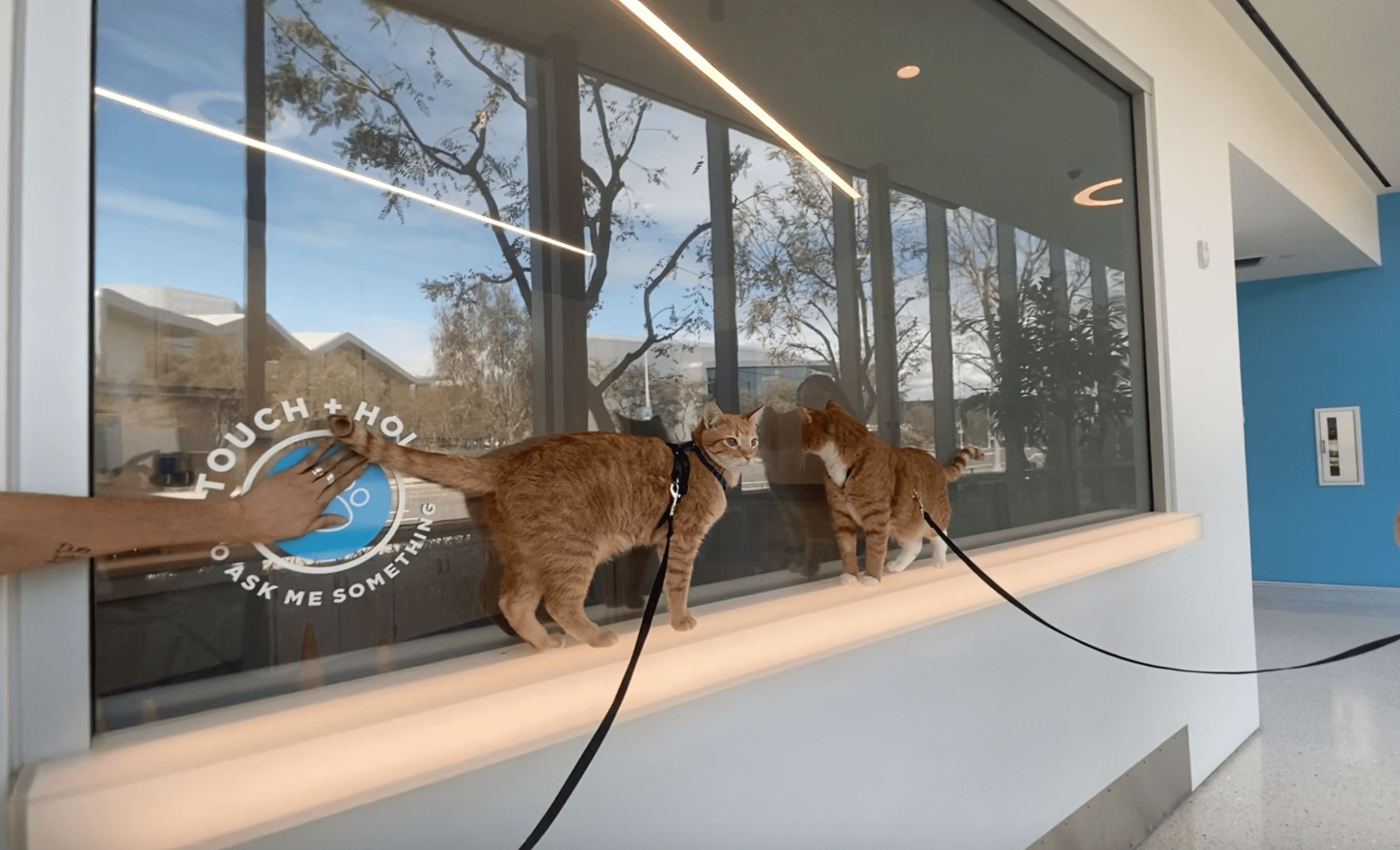 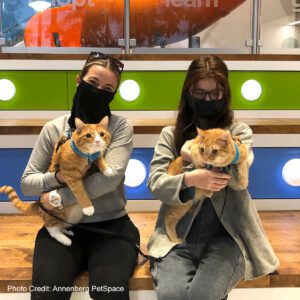 Searching for a home as a pair can create challenges in finding a willing and suitable adopter due to the added costs for food, potential medical issues, and other needs that two cats might have. In their time at PetSpace, veterinary staff discovered that both cats had chronic upper respiratory infections. Appropriate treatments were developed to help address these ongoing ailments.

Annenberg PetSpace spent time on training, caring for them 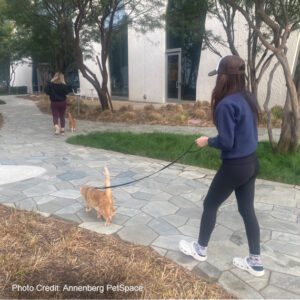 Michael & Dwight quickly became staff favorites. Their friendly personalities and constant feline curiosity drew everyone in to spend time with the pair. The Animal Care team decided to unleash their curiosity by, paradoxically, leash-training the two tabbies. They adapted very quickly to the opportunity and would lead their handlers around the facility to visit staff, guests, and other animals. The two-year-old cats promptly adapted to being around other animals, often rubbing faces with dogs as in this encounter between Dwight and Baloo, a surprisingly friendly PetSpace resident. The two tabbies became the go-to pet ambassadors for Pet Encounters, livestream sessions, and models for promotional photos.

Meanwhile, the Animal Care team determined that Michael & Dwight had rhinitis, which causes swelling in their nasal passages. To help alleviate the swelling, the team created a routine to give the two cats a humidified saline solution through a nebulizer every other day to breathe more comfortably. The often-adaptable duo quickly took to the ten-minute process, only showing disappointment that they were alone during the treatment rather than together. They were also placed on a gastrointestinal diet to aid in proper digestion due to their ongoing issues with loose stool, which could sometimes be difficult for the pair. The PetSpace team created a video to help make these health needs and treatments clear to potential adopters.

Found them a home where they could thrive 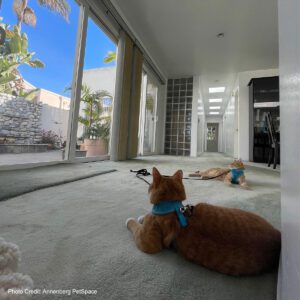 Michael & Dwight had just celebrated their first anniversary at PetSpace when, as fate would have it, Stephanie and her daughter Natalia decided that Michael & Dwight would fit perfectly in their home! Stephanie and her family, who live in the nearby El Segundo, had recently lost their orange tabby of 16 years, Skittles, and were looking for a new feline companion to fill the hole in their family. Having volunteered for PetSpace, Natalia brought her mother and herself to look for a cat. However, they found two cats! They immediately fell in love with Michael & Dwight after watching a promotional video that explained the cats’ medical needs.

Coincidentally, Natalia also had to undergo nebulization treatments, so she and the two cats would all get to spend time on the couch together with their nebulizers! The standard treatment was the clincher. Stephanie knew right away that Michael & Dwight were meant to be a part of their family! The two have since touched base via Instagram Live for a memorable Pet Encounter with the Annenberg PetSpace team and are doing well. They continue to explore while on harnesses and are living comfortably indoors with their new family.

Providing transparency and education about adoptable animals and their needs proved an essential factor in their adoption success.

Annenberg PetSpace represents the latest extension of Wallis Annenberg’s philanthropic work, which has long supported organizations and projects dedicated to improving the well-being of people and communities in Los Angeles, surrounding regions, and throughout the world.