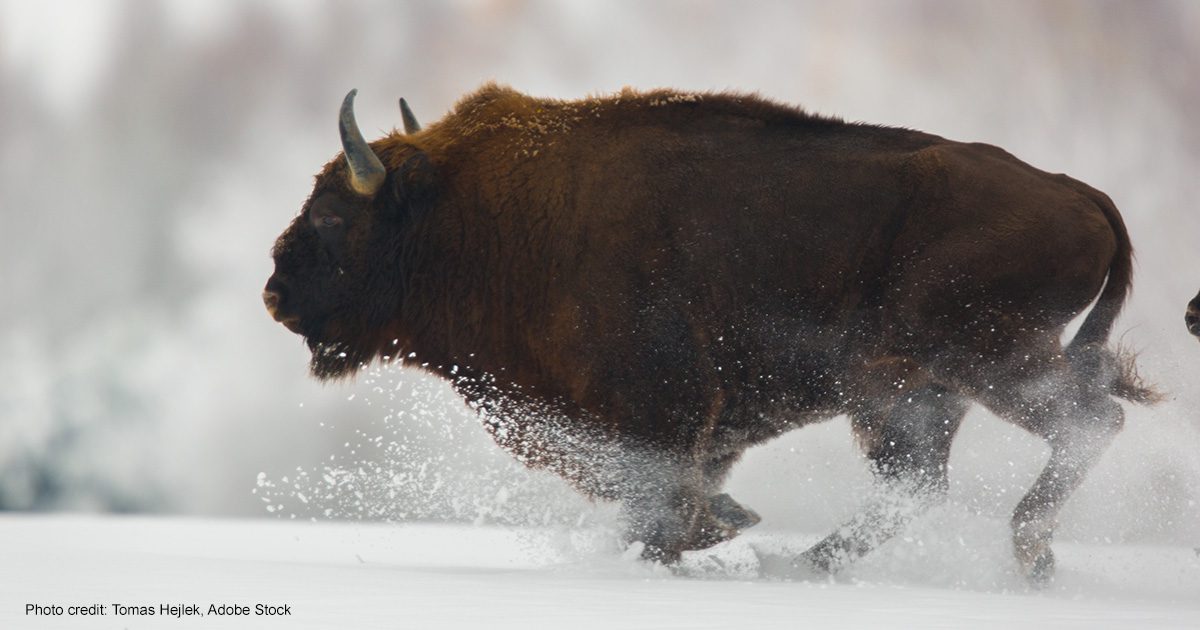 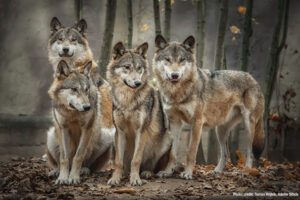 The report on the recent international meeting on biodiversity in Montreal describes some political considerations and challenges as the world attempts to protect and sustain biodiversity. But what is biodiversity, and how is it changing around the globe?

Biodiversity refers to the variety and variability of all living organisms on earth, from the smallest microorganisms to the largest vertebrates or plant forms, and refers to the variation of life at different organizational levels, from individual genes to whole ecosystems. Biodiversity is not distributed evenly across the earth and is usually greater around the equator. For example, tropical forest ecosystems cover less than 10% of the earth’s surface but contain around 90% of the world’s terrestrial species. There is also a long-standing debate over what happens to biodiversity over time. Early studies appeared to indicate that biodiversity increases with time. However, more recent research suggests that biodiversity might not change significantly once a particular ecosystem reaches a “full” state.

However, unlike climate change which has had a relatively straightforward focus on reducing emissions of a few major greenhouse gases, biodiversity conservation has not offered a similar set of direct targets for global action. The term “biodiversity” encapsulates too much. It includes species number and diversity, the richness and productivity of global ecosystems, and the genetic variability of individual species. Several additional terms have also entered discussions of biodiversity and its preservation. A recent example is “nature-based solutions.” But the different terminology has not provided any greater clarity in efforts to establish practical measures of biodiversity, its protection, and recovery. 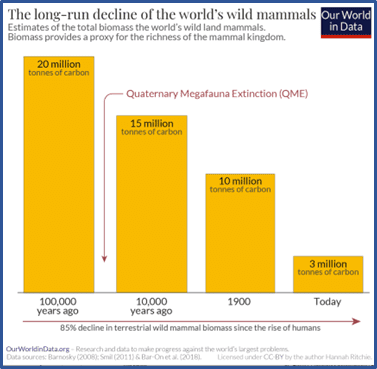 An excellent resource where one might gain a sense of the long-term changes in global wildlife biodiversity is the recently updated report on biodiversity by Hannah Ritchie, published on the “Our World in Data” website. Ritchie focuses on the changes over millennia in terrestrial mammal biomass (measured as tonnes of carbon – because carbon is the primary chemical building block for life on earth). One hundred thousand years ago, the terrestrial landscapes supported a wide range of mammals, some of which were very large. Mammoths roamed across North America, huge (200-kg) wombats inhabited Australia and the giant ground sloth (standing 10-foot tall) inhabited South America. Then disaster struck – humans started expanding across the world. Wherever humans appeared, the local megafauna soon went extinct (e.g., mammoths in North America, ground sloths in South America, and giant wombats in Australia), leading to what is now known as the Quaternary Megafauna Extinction (QME) that took place from 15,000-65,000 years ago.

During the QME, the world lost almost 200 of its large mammalian species and an estimated 25% of total wild terrestrial biomass. Researchers have grappled with the cause of the QME (climate change and human hunting being the primary factors under consideration). While there is still some reluctance to believe that a paltry few million humans could have had such a significant impact on mammalian extinctions, hunting pressure was likely a factor in the QME.

According to data from the UN Population Division, the global human population reached one billion early in the 19th century and doubled to two billion over the following 120 years.   The world added 4 billion people during the rest of the twentieth century. Wildlife numbers (and biomass) continued to decline in the last century. The Living Planet Index (LPI) has been tracking animal populations since 1970 and documents almost a 70% decline in a range of animal populations in the past 50 years. Wild mammalian global biomass now amounts to around 3 million tonnes of carbon. Habitat loss resulting from the conversion of wild landscapes to agricultural land is the primary driver of this wild animal decline. To put the fall into perspective, humans currently consume around 31 million tons of domestic mammal carbon equivalents yearly.

However, wild mammals have been making a comeback in Europe thanks to conservation efforts on the continent. Rewilding Europe reports that many mammalian species have recovered in the past forty to fifty years. Given Europe’s relatively high human density, these increases are encouraging. For example, the European wolf population has increased almost 20-fold from 1965 to 2016, and the beaver population increased 167-fold from 1960 to 2016. The reasons for European wild mammal recovery include establishing policies limiting or banning hunting and exploitation and habitat protection. In addition, over the last fifty years, land devoted to agriculture has declined in Europe, allowing natural habitats to expand. The European rewilding experience indicates that wild animal populations can be recovered, even in the presence of high densities of people. However, recovery requires public support for “increased legal protection, the creation of wildlife corridors between protected areas, the recovery of prey species, reintroductions and other population support measures, together with an ever greater willingness and desire by Europeans to live alongside and enjoy the presence of wild animals.”