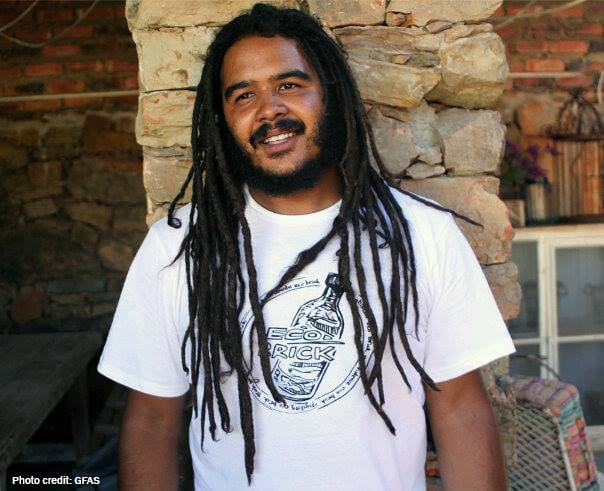 South Africa, like many countries around the world, is struggling to balance the needs of the environment as well as the development and infrastructure needs of the people. The Western Cape (in the southern portion of the country) is the home of a unique Cape Floral Region – Fynbos (which translates as “small leaf”). Fynbos is one of the five floral kingdoms in the world and it is only found in the southern tip of the African continent. Marshall Rinquest, who was raised and educated in the Western Cape, has become an important educator and role model for people who are fortunate enough to live in the region in the midst of Fynbos.

He also worked alongside humane educator, Tarryn van Wyk, who passed on to him her skills and expertise so that now he offers parallel teaching in both disciplines in all six schools in the area. In the role of environmental educator, Marshall is particularly passionate about waste as he sees the damage done to the delicate eco-system and the outstanding beauty of the area in which he lives. He is leading Greyton’s bid to become the first town in South Africa to reject the single-use shopping bag. His education work in waste management is in high demand and he is often called to travel as much as 200 miles to deliver training to pupils and teachers.

Marshall’s work was recognized when he received the Young Environmental Leader award as part of the EcoLogic Ceremony in Cape Town in 2016. In 2017, he was selected by the DG Murray Trust to join 29 other young African men and women in a year of training to develop their skills as leaders.

The bedrock to his working life is his family. He married his childhood sweetheart, Ruwayda, and they have two children, a boy, and a girl. In his spare time, he is a bass guitarist in The Country Conquerors, the world’s only Afrikaans reggae band and one of the few to be invited to play at the South Africa World Cup. They were also invited to tour Seychelles and have cut two albums. They use their large following to transmit messages, through their own songs, on the dangers of drugs and crime, the need to be less wasteful, and they call out to the country’s youth to join them as leaders in creating a brighter and more sustainable future for South Africa.