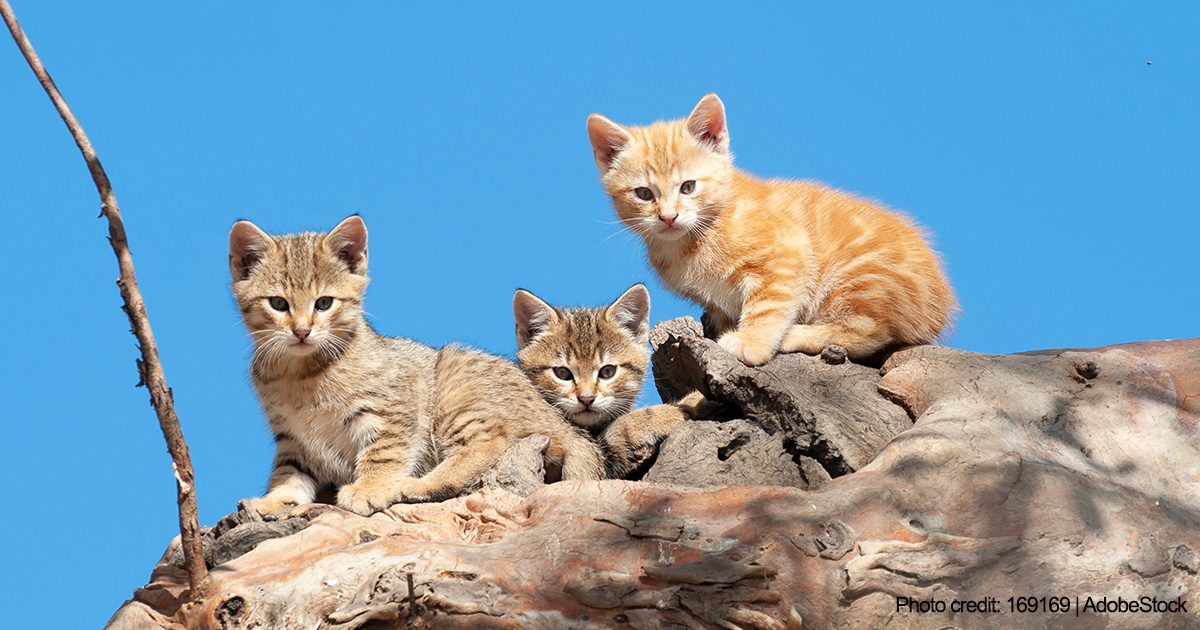 Posted at 11:54h By Jacquie Rand and Andrew Rowan, DPhil

In 2015, the Australian government pledged to reduce the feral cat population in the country by one-third (about 2 million cats) by 2020. Reportedly, just over 200,000 feral cats were killed in the first year after the plan was announced, mostly poisoned with 1080 in baits, a banned substance in many countries because of the inhumane way it kills. The proposed plan to cull millions of feral cats to reduce their impact on Australia’s threatened birds and animals was always going to draw protests from animal advocates. However, some scientists have also criticized the plan, arguing that the pledge “had only a weak scientific basis” in the absence of reliable estimates of the actual numbers of feral cats in Australia.

In 2017, feral cat populations in Australia were estimated to range from 1.4 to 5.6 million – this estimate excludes the 700,000 outdoor cats living in human-disturbed environments.  In dry seasons, feral cat numbers would be at the low end of the range but would increase if the outback experienced good rainfall.

Feral cats have been successfully eliminated from some islands (e.g., cats were eradicated from the 290 km2 Marion Island in the South Atlantic, the 620 km2 Dirk Hartog Island off the coast of Western Australia, and the 128 km2 sub-Antarctic Macquarie Island). However, such efforts take substantial time and resources and may have unintended negative impacts on native fauna and flora. Eliminating cats from the Australian Outback is likely impossible with currently available methods.

The attempts to eradicate cats from the 4,000 km2 Kangaroo Island focus on only small areas of the island that are critical refuges for native mammals. In other words, the pledge to kill 2 million feral cats is mainly political theater. The plan has little obvious conservation merit (and nobody has demonstrated that such a cull is achievable). Other invasive mammalian species in Australia (e.g., foxes, rabbits, and horses) have also been targeted without much noticeable progress in reducing their numbers. [Foxes were deliberately set free in Australia to support British-style fox hunts!]. Data show baiting with 1080 has largely been ineffective in achieving a sustained decrease in feral cat numbers over several years and that native animals are also at risk of poisoning.

The Australian government’s actions and pledges against feral cats in the Australian bush have also affected cat management in urban and suburban areas. In Europe and North America, cat management includes trap-neuter-return (TNR) strategies to reduce the number of cats outdoors and, arguably, their impact on wildlife. Conservation biologists started aggressive campaigns against TNR in North America following the publication of a 2009 critical review of TNR effectiveness by wildlife biologist Travis Longcore and his colleagues.

TNR was an approach imported from Europe into North America and promoted by cat advocates as an effective and non-lethal alternative to control cats in cities and towns. However, in 2009, there were very few published scientific studies on the positive impact of TNR on cat populations. There are now numerous publications describing successful TNR projects that have led to a reduction in the populations of outdoor cats in urban and peri-urban environments.

A Community Cat Program implemented by the Australian Pet Welfare Foundation that includes intensive sterilization of owned and outdoor cats now provides evidence that such programs in Australian communities also lead to reductions in cat shelter admissions and euthanasia. The project adapted a strategy pioneered by Professor Julie Levy of the University of Florida in Gainesville, Florida. In the Gainesville project, TNR was carried out at sufficient intensity to affect outdoor cat populations – as measured by the number of cats from a specific area surrendered to local animal shelters.

Professor Levy and her colleagues (many of whom were students at the University of Florida College of Veterinary Medicine) identified one area in the surrounding county as the control area and one as the experimental area. The TNR effort in the control areas did not change over the two years of the project and averaged around ten outdoor cats trapped and sterilized annually per 1,000 human residents. Intensive TNR (averaging about 60 outdoor cats trapped and sterilized annually) was implemented in the experimental area. The local animal shelter in the county tracked cat intake from the two areas. Cat intakes from the experimental area dropped from an average of 8-12 cats per annum per 1,000 humans to 4 cats per 1,000 residents in the project’s second year. In the control area, cat intake was relatively unchanged and ranged from 13-16 cats per 1,000 residents per annum.

The Australian Community Cat Program has also tracked the number of cats sterilized per 1,000 residents and reports that sterilization of around 30 cats per 1,000 residents in a year produces a 30-50% reduction in cat intake into the community animal shelter within 12-18 months. This outcome is similar to the findings in Gainesville, Florida. In the Australian program, most (84%) of the sterilized cats were owned and came from low-income communities associated with high cat admissions to the shelter. Around 12% of the cats were semi-owned (cared for by someone who did not consider themselves as the cat’s owner). But once the cat was sterilized and microchipped, it was claimed as owned by the human caregiver. Only 5% of the neutered cats were returned and cared for as semi-owned cats (TNR).

The program has recorded reductions in cat shelter intake following sterilization campaigns in one rural town, one suburb in Queensland, one suburb in New South Wales, and the city of Banyule (population 130,000) in Victoria.

The success of this project is particularly noteworthy given that returning stray cats to where they live (i.e., TNR) is banned in all Australian states. The Queensland site in the project has the only permit ever issued in Australia for a legal TNR trial. The Australian bans on TNR do not recognize that outdoor cats living in Australian towns and cities comprise a very different population than the feral cats living as wild animals in the Australian Outback. The shelter intake data reported by the Community Cat Program likely indicates that outdoor cat numbers in the project communities are also declining because of the sterilization efforts. Confirmation of this conclusion is being sought using camera trap data over the five years of the project.

While the sterilized and returned cats could continue to prey on Australian wildlife, the project provided cat owners and carers a “leg-up” on the ladder of responsible cat ownership. Also, stopping the birth of kittens has a positive impact on cat and human welfare. Sterilization prevents the birth of kittens who mostly die of natural mortality (approximately three-quarters of kittens born to outdoor cats die before they reach one year of age) or end up euthanized in shelters. The reduction in cat euthanasia benefits the mental health of shelter staff and animal control officers tasked with killing healthy and treatable cats and kittens for population control.

Dr. Jacquie Rand is an Emeritus Professor at the University of Queensland, Australia, School of Veterinary Science. She is an internationally recognized research leader in feline medicine and welfare. Dr. Rand has researched the health and welfare of companion animals and the contribution such animals make to our lives. She is also the executive director and chief scientist for the Australian Pet Welfare Foundation, a research and advocacy organization.