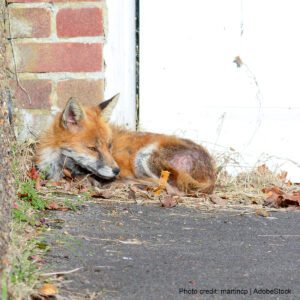 The red fox (Vulpes vulpes) is the most widely distributed wild carnivore on the planet, with a natural range that spans the entire Northern Hemisphere. Below the equator, foxes have been introduced to the Falkland Islands and Australia, where they cause widespread damage to domestic livestock and native fauna. Fox predation is a common cause of fox-human conflict throughout their range, leading to a complex relationship with humanity. This relationship varies where the fox is alternatively regarded as verminous, if not demonic, but is also an object of affection and regard — a typically bipolar human-animal relationship.[i]

The red fox’s ability to occupy a wide range of habitats, recently including cities and suburbs, is due to several factors. The adult red fox is relatively small, rarely reaching more than 15 pounds, and has high reproductive potential because it has large litters. The red fox also has a generalist diet that includes small mammals and birds, berries, fruits, and an occasional human handout. Furthermore, its secretive habits include nocturnal behavior and its dens are well hidden in dense vegetation.

Urban foxes have been well-studied in Europe, North America, and Australia. Still, it is in Great Britain where the longest and most comprehensive research has occurred, revealing many aspects of their adaptation to urbanizing environments. It is also in Great Britain where the human-fox relationship has been thoroughly probed and dissected, illustrating the changing dynamic of human-wildlife relations.

Fox persecution can be traced to Tudor times, as documented by Roger Lovegrove in his survey of bounties recorded by English and Welsh parishes (Silent Fields: the long decline of a nation’s wildlife, Oxford University Press, 2007). Bounty payments under a 1566 Act to control various kinds of “vermin” indicate that the fox was second only to badgers in the size of the payment assigned to the species. By the second half of the sixteenth century, fox hunting had become a popular pastime of the landed class, leading to a paradoxical situation in which foxes were both protected and persecuted. Still, it is likely that the relentless pursuit by gamekeepers and the particular vulnerability of the fox when tied to dens to rear young could have led to their virtual elimination were it not for the intervention of two world wars. With so many men called up to the fight, the fox may have received sufficient reprieve to avoid the fate of other wild animals in Britain that were eliminated.

The documentation of British fox urbanization started in the 1960s, although when foxes first began to move into cities remains an open question. Whatever the case, once the urban fox population grew to a sufficient size, fox-friendly railway corridors provided the perfect opportunities for further urban dispersal. A recent survey[ii] indicates that, within the last 25 years, foxes have been sighted in more than 90 percent of urban areas in England and Wales. 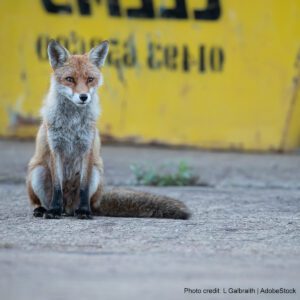 Two cities have been especially well-studied:  London and Bristol. Research in those cities has contributed significantly to our understanding of how foxes have adapted to urbanizing environments, not to mention the flexible nature of mammalian social organization and behavior. The primary social grouping for foxes outside cities consists of an adult pair who maintain a territorial area, with group size peaking in the spring and summer after annual births. As they age, the young often, but not always, disperse from the natal territory to set up shop on their own. Increasingly that has involved moving into suburban and urban habitats. In London, foxes are routinely “controlled” through culls, whereas Bristol has not targeted its foxes for removal. With upwards of 60 percent of the diet of Bristol foxes consisting of anthropogenic foods, often in direct handouts in people’s gardens (a widely practiced and somewhat iconic British pastime), fox numbers there soared during the 1980s and early 1990s. This fox population growth resulted in much greater fox sociality[iii] in the form of shared and overlapping territories and groups, including multiple adults. In the most extreme example, a report[iv] documented a fox group consisting of ten adults — an extraordinary occurrence for what is often termed a “solitary” carnivore.

In 1994, sarcoptic mange was first detected in Bristol foxes. A parasitic mite causes the disease, which infects both domestic and wild animals. In dogs, mange is easily treated and rarely causes harm, but it can be deadly in wild animals without treatment. A significant fox die-off in Bristol created a natural experiment in mammalian social behavior. The greater sociality exhibited in the dense pre-mange population reverted to more “typical” fox behavior in the less dense phase.

From London, another study[v] comparing city foxes with their rural cousins found a significant divergence in skull morphology, with the urban foxes exhibiting shorter snouts, smaller braincases, and less apparent male-female dimorphism than their rural cousins. If this sounds familiar, it is the path many of our domestic dogs take. So, are urban foxes showing what the study’s authors characterize as a ‘domestication syndrome’? Perhaps. But as they also point out, domestication depends on a suite of characteristics. Further research will be needed to clarify what is happening.

London has also been the epicenter of what can be called an episode of media “hysteria” (or, more technically, a moral panic) involving foxes.[vi] In the early summer of 2010, a genuinely baffling event occurred when a fox entered a house in East London and attacked sleeping 9-month-old twins in their upstairs bedroom while the parents were downstairs watching television. Their cries alerted the parents, who chased the fox out of the house, but not before the infants were injured, requiring hospitalization. The ensuing media storm, facilitated perhaps by a slow or “silly” news season, created a wide-ranging discourse on foxes. This discourse included whether foxes “belong” in the city or should be more aggressively controlled and whether they were a public menace capable of invading even the more sacred human spaces – the nursery.

The resulting media uproar created a social narrative much larger than the episode that triggered it in the first place; hence, a moral panic. The matter remains unexplained, perhaps because there is no explanation for it. Wild animals, especially foxes, will continue to surprise us and do things that defy our understanding, such as adopting group living or nonchalantly stopping and staring at us while we are walking. As wild animals become increasingly urbanized, we will have the opportunity to see more of them. Hopefully, such familiarity will include a better understanding and greater tolerance of our wild neighbors.