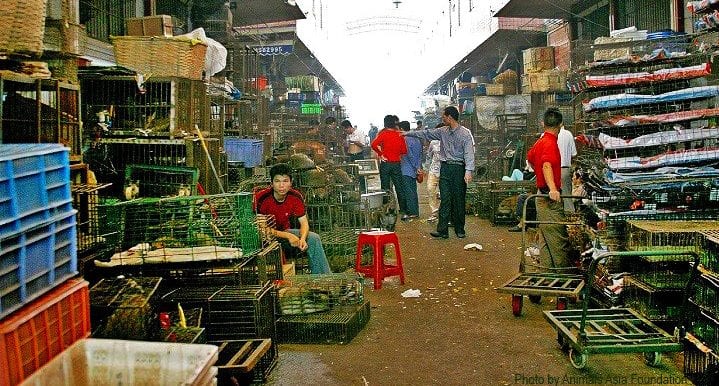 Posted at 13:49h By Jill Robinson, MBE, Founder and CEO, Animals Asia
As the number of people tragically succumbing to Covid-19 grows across the world, we are left reeling with the terrible consequences of our actions and of our ongoing disregard of animal cruelty and hygiene in the live animal markets of Asia and across the world. Joining a chorus of other high-level names, Dr. Anthony Fauci, the Director of the US National Institute of Allergy and Infectious Diseases, has pointed the finger at live wild animal markets as the source of diseases such as Covid-19, which has crippled and paralyzed the world. We know that approximately 75% of emerging infectious diseases affecting humans are zoonotic (animal based), accounting for billions of cases of illness and millions of deaths each year. Our treatment of animals must now surely be under the spotlight and held to full and final account.
From SARS to Covid-19, from Ebola to MERS to HIV, the global wildlife trade is implicated in every one of these infections. The whole world must take responsibility for the tragic consequences we are seeing today.
For over 34 years, Animals Asia team members and I have visited and documented the live animal markets of Asia. We have breathed in the dust and bacteria emerging from tall stacks of cages containing a wide range of miserable animals. This melting pot of disease sees the worst abuse of wild, domestic and endangered species – from farming, husbandry, transport, sanitation and welfare. As row upon row of sick and dying animals stare miserably out from behind chicken wire and bars, they shed the diseases exacerbated by the stress and cruel treatment to which they have been and are being subjected.
Fetuses aborted by stressed mothers are tossed to starving animals in the next cage. Dogs lie prone with parvo-virus as blood-drenched slime runs from their back ends, or with noses running green with the mucus of distemper, side-by-side with sneezing ferret badgers, shivering masked palm civets, flu-stricken cats, flea-ridden bamboo rats, snakes, turtles, donkeys, and bloodied three-legged victims of illegal trapping in the wild who hobble painfully away from humans brandishing wooden clubs and knives.
The greatest injustice to both humans and animals comes from those who argue against the closure of these foul and unhygienic markets, undermining the widening efforts of those who have been calling a halt to these facilities for years. Defenders argue that closing such outlets would lead to an increased risk of the wildlife trade being controlled by organized crime. But the trade is already controlled by organized crime. Far better to spend millions or even billions on defeating and ending this crime and ending the trade and wet markets now, rather than spending trillions of dollars dealing with the current and new pandemics caused by the current dysfunctional and largely corrupt components of the wildlife trade. 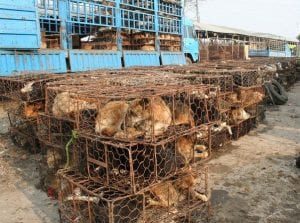 An even more astonishing argument suggests that the world should improve regulation of wildlife markets to address animal welfare concerns. One only has to see undercover video of legal animal slaughterhouses worldwide to understand that even regulated practices surrounding live animals are woefully under-policed. Why do videos need to be undercover, and why do these places criminalize the taking of pictures if they do not have anything to hide? There is no point believing that those who supply and run the wildlife markets will conform to “improved regulations” when it is clear that attempts to implement such regulations following the 2003/2004 SARS outbreak failed miserably, leaving the world struggling with the current pandemic.
Calling on improved regulation of such markets fails to recognize that animal welfare and mitigating the risk of disease will always fall substantially short when economic gain is the main concern.
Yes, there are people who will be horribly affected if these terrible places are closed down. But responsible governments are already providing compensation and encouraging the growth of alternative livelihoods, acknowledging that viruses never distinguish between legal and illegal trade. Regulations mean nothing to the millions of stressed and compromised animals caged in rank, disgusting conditions, as they continue shedding disease.
Today, according to the Chinese Academy of Engineering, the China wildlife trade is valued at US$74 billion (that figure includes the fur industry which accounts for 74% of the total). These wild animal markets must close for good, acknowledging the truly dreadful social cost and enormous financial repercussions should another pandemic emerge, which dwarf the economic gains generated by the wildlife trade. We can no longer live in fear of being bullied by economic gain and a lust for the dollar that hijacks our health and undermines respect and compassion for life. We must support rather than sneer at those who promote compassion and animal welfare. It is our duty of care to our children and generations ahead to live harmoniously, responsibly, healthily and kindly with the creatures who share our earth.
Jill received an honorary doctorate in veterinary science from the University of Zurich, Switzerland in 2012, and an honorary law degree from the University of Nottingham Ningbo China in 2014.
This article is an edited version of the post that originally appeared on the Animals Asia’s website on April 15, 2020.
Print page