Posted at 11:30h By Kathleen Rowan
The theme of the Third African Animal Welfare conference was the connection between the UN Sustainable Development Goals (SDGs) and Animal Welfare. Dr. Andrew Rowan was asked to give a presentation that addressed how the SDGs intersected with global animal welfare. There are seventeen SDGs but due to time constraints he concentrated on five – Life below Water (14), Life on Land (15), Good Health and Well-being (3), Responsible Consumption (12), and Sustainable Cities and Communities (11).
There are many synergies between animal welfare and Life below Water (SGD 14) and Life on Land (SDG 15) but Dr. Rowan focused mainly on the threats to marine animals from plastic waste, the disappearance of habitat for terrestrial animals and the need to connect wildlife habitats via appropriate corridors that the animals could traverse. He noted the threat of species extinction and the huge decline in the populations of wild animals and in wild biomass (only 4% of current mammalian terrestrial biomass is wild!). One glimmer of hope is that the world is now attending to the need for wildlife corridors (for example, three African countries have legislation mandating connectivity – South Africa, Kenya and Tanzania) and “Connectivity Conservation Plans” (CCPs) are growing in frequency. 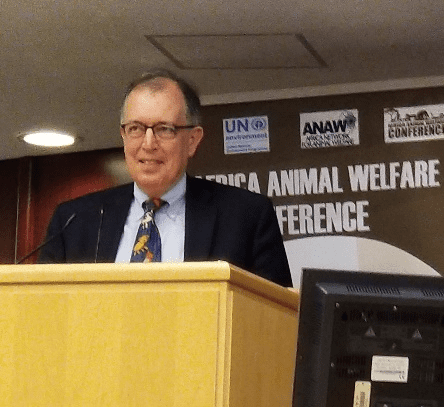 When it comes to Good Health and Well-being (SDG 3), he (and a number of other speakers) noted the importance of zoonotic diseases for human health and drew attention to the emergence of a number of new zoonoses in the past fifty years as humans encroach on wilderness areas (e.g. Aids, Ebola, and SARS). In addition, around three-quarters of world antibiotic production is currently being fed to animals in intensive farm systems (factory farms). The animals are so crowded that it is very difficult to keep infectious disease at bay without dosing them daily with antibiotics. Dr. Rowan noted that the heavy use of antibiotics in these systems is a factor in the increasing concern over antibiotic resistance among pathogenic organisms (the WHO launched a global action plan to address the threat in 2015). In addition, intensive animal production systems are an effective incubator of pathogenic strains of zoonoses like avian flu. On the other hand, Dr. Rowan observed that nature has been shown to benefit human well-being and a recent study reported that a lack of exposure to nature leads to an increase in mental health disorders.
In his concluding comments, Dr. Rowan drew attention to two major threats to existing wildlife and nature – namely current consumption growth (SDG 12) and increasing human populations (SDG 11). It has been reported that current consumption levels are already too high (we are consuming 1.5 times the level the Earth can sustain) and population increases will only exacerbate the problem of sustainability.
But there are some silver linings. There are a variety of initiatives seeking to develop and implement a green and more sustainable economy. On the population front, current UN projections suggest that the global population will peak somewhere around 11 billion people in 2100. But this projection is not inevitable. If through the availability of family planning services and products, we could eliminate unintended pregnancies, the world’s population would peak at around 8.8 billion in 2050 and then would fall back to the current 7.7 billion by 2100. Dr. Rowan stated that we should all be working to ensure that the global population ends up at the lower level because we would then have a far better chance of addressing global sustainability challenges in 2100 if there were one-third fewer people to support. The developed world needs to cut consumption and the developing world needs to slow population growth.
Please refer to Dr. Rowan’s presentation on “Linking SDGs & Animal Welfare: A Global Perspective” at the Third African Animal Welfare conference.
Print page