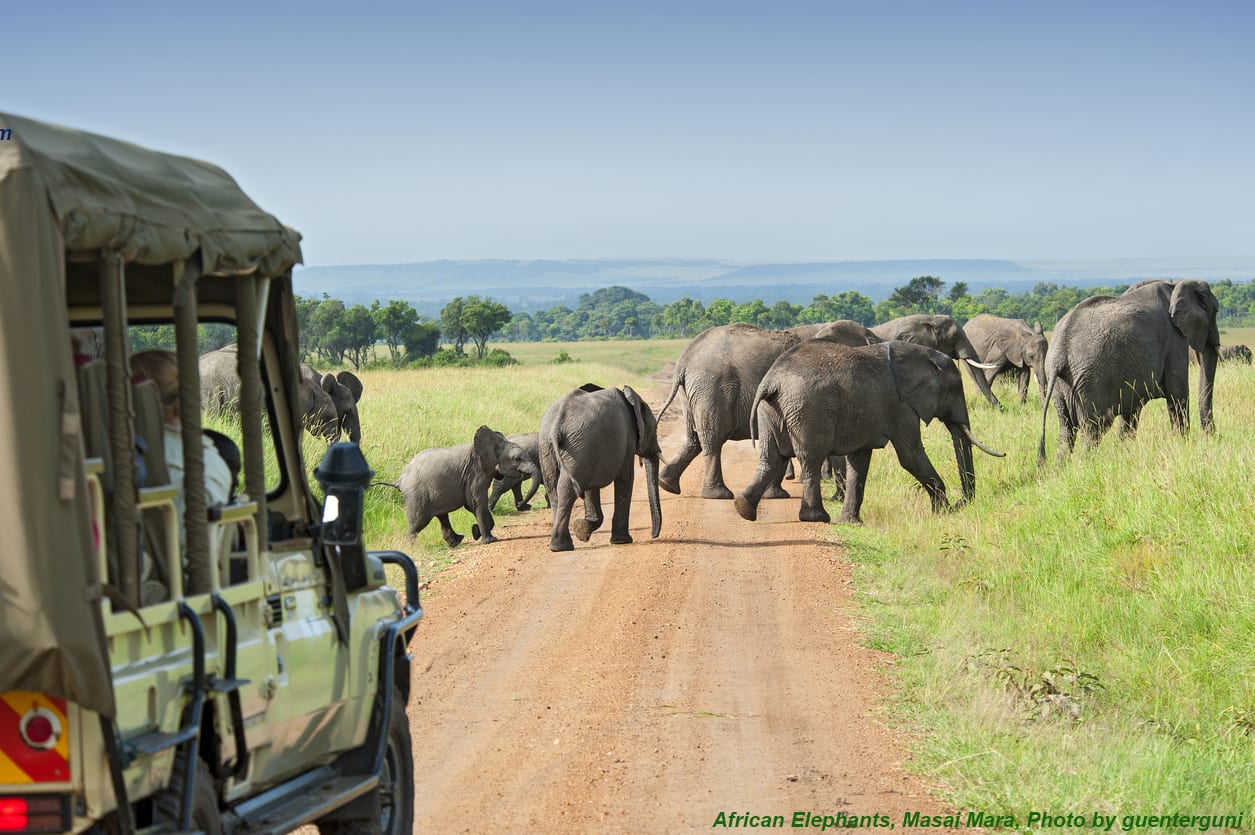 The UN World Tourism Agency published a report in 2015 on the importance of wildlife tourism to national economies in Africa. About half of global wildlife tourism involves a visit to an African country, resulting in 6 million tourists a year visiting Sub-Saharan Africa (about 10% of total tourist visits to Africa). In addition, the wildlife tourism market was reported to be growing at a very healthy 10% per annum. But the 2020 pandemic has resulted in the collapse of wildlife tourism (close to zero visits to Africa after the beginning of May, 2020) and a major (but hopefully temporary) crisis for wildlife conservation (and for the people dependent on such tourism).

A recent article in Nature by conservation biologist Peter Lindsey and his colleagues that focuses on the conservation crisis caused by the current pandemic, reports that wildlife tourism in Africa generates $29 billion annually and employs 3.6 million people. Despite the economic value of such tourism, most protected areas in Africa suffer from a chronic shortage of funds to manage and protect the flora and fauna. While the pandemic is the current crisis, there are a number of other looming threats.

Human pressure on protected areas in Africa has grown dramatically in the last sixty years in the form of both human numbers but also the growth in domestic livestock (see Table). An extra two hundred million cattle and 300 million goats now compete with wildlife for resources compared to the situation in 1961. Increases in human, cattle and goat numbers are probably related to the decline in wildlife. Elephant numbers, for example have declined by 5-fold over the same period (80% or more) from an estimated 2 million elephants in 1961 to under 400,000 in 2018.

Although 17.2% of the land in sub-Saharan Africa is under some form of relatively strict protection, wildlife populations are nevertheless declining sharply. In Kenya, for example, wildlife biomass fell by more than 50% in just the twenty years between 1980 and 2000 and wildlife populations declined at the same rate inside the national parks as outside according to 2019 World Bank analysis. The World Bank report specifically identifies habitat fragmentation (the national parks were established without any understanding of the migration/dispersal needs of wildlife) and poorly planned linear infrastructure (e.g. all-weather roads) as key factors causing the decline in wildlife (80% loss of wildlife within 20 kilometers either side of a road). Healthy wildlife populations need to be able to disperse.

In an earlier item in WellBeing News, the destructive impact of roads on wildlife was briefly described and that article included a map of proposed major roads in Africa indicating that most of the proposals were poorly justified when using transparent cost-benefit criteria. The World Bank report on Kenyan wildlife declines provides additional details of the adverse impact of roads but adds an interesting twist – an economic assessment of the consequences of wildlife loss. As the report notes, “if the economic benefits brought about by habitat conversion outweigh the losses, it is arguable that .. [such losses are] .. a necessary, if regrettable, price to pay for development.” But if the loss of tourism income exceeds the benefits of land conversion, then perhaps one should seek alternative wildlife-friendly development. The report explores two possible solutions that support wildlife and the tourism income it generates – namely a road network that pays attention to the negative external effects that it produces and a policy that expands the role of conservancies.

The World Bank report argues that it should be possible for Kenya to both support wildlife and development, but future development will have to involve planning that places support for wildlife (among the top considerations) during the planning process. This will require, amongst other considerations, a very careful situating of new all-weather roads because such roads result in a 76% decline of wildlife populations within 20 kilometers on either side according the World Bank analysis. 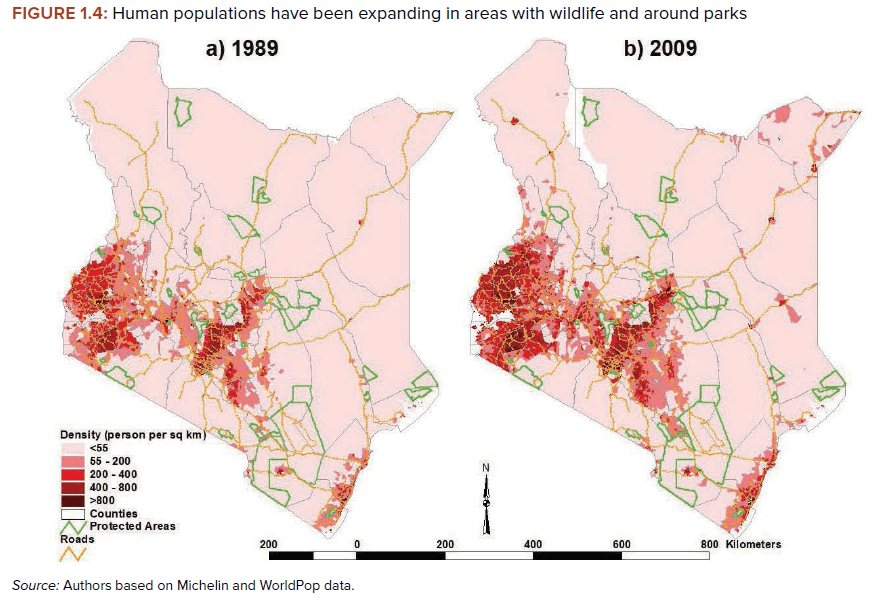 Figure copied from World Bank report, page 4. In 1989, Kenya’s human population was 23 million. In 2009, it was 41 million. Wildlife has almost completely disappeared from the heavily populated area in the west of Kenya and wildlife populations in the Masai Mara (the green enclosure on the Kenyan border in the west) have declined significantly in the last fifty years.)

Conservancies, now covering 58,000 Km2 of the country with 36% on private land, 51% on community land and 13% on group land, could play a significant role in protecting Kenya’s wildlife in the future. Currently, around 22% of the wildlife biomass is found in conservancies (the National Parks, that cover 47,000 Km2 hold 38% of the wildlife biomass) and 18 of 20 zones with the highest wildlife densities are found in conservancies. But the latest data indicate that the conservancies currently earn only around 1.5% of the almost $1 billion generated by wildlife tourism, indicating significant growth potential for this sector.

According to the World Bank report, Kenya could not only maintain its current wildlife population but could increase it if sound economic planning that benefited both people and wildlife equally was instituted. Kenya is an example of what is happening across Africa to wildlife populations, but the country is also an example of what could happen. Development need not be a zero-sum situation in which one either benefits people or animals. Protecting wildlife, coupled with carefully planned tourism, does generate significant economic returns that justifies setting aside large areas for wildlife. Currently, African wildlife tourism is grappling with the immediate loss of nearly all tourism income but there is a looming demographic challenge as the human population in sub-Saharan Africa is projected by the UN to increase from today’s 1.1 billion to 2.1 billion in 2050 and 3.8 billion in 2100.

These population projections are often treated as though they are inevitable outcomes. They are anything but. For example, in the 2002 UN Population projections, Tanzania and Kenya were projected to reach populations of 69 and 44 million in 2050. The latest UN population report projects the two countries will have 129 and 92 million people respectively in 2050. The Thriving Together initiative, started by the Margaret Pyke Trust in London in 2019, is being supported by over 150 organizations and it is premised on the idea that making family planning more accessible and acceptable combined with conserving habitats and wildlife could be very beneficial for both wildlife and people. If one could address the unmet need for family planning, the world’s human population could peak at less than 8 billion in 2100, instead of the projected 11.2 billion. The impact would be particularly large in Africa. WellBeing International has joined the initiative and we encourage other organizations to do the same.