Posted at 09:46h By Andrew Rowan
Thirty years ago, the Kruger National Park in South Africa was managing its elephant population at a population of around 7,500 elephants via an annual culling program. This stopped in the mid-1990s and Kruger then began to translocate elephants to private conservancies and other provincial and national parks. Initially, the translocations were rather haphazard but then they began to translocate whole “family” groups. In 1996, Kwatile (Xitsonga or Shangaan for “the angry one”) was an older elephant matriarch who was translocated with her group of 8 elephants to the Greater Makalali Private Game Reserve (GMPGR) to join three other family groups. Kwatile was well-named in that the Makalali rangers and personnel always had to be careful around her as they never knew when she might take offense and, when an elephant matriarch takes offense, any people nearby have to watch out! 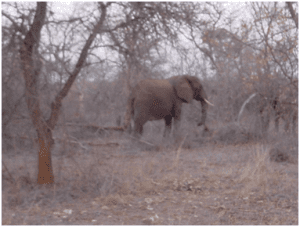 Photo by A Rowan

By 1999, the Makalali Conservancy owners and managers were becoming concerned about the growth of the elephant population and its impact on the ecosystem.They began to discuss what to do about it. They did not want to cull the elephants, but translocation was not a viable and sustainable option. Fortunately, a trial of a new immune-contraceptive vaccine on elephants had just concluded in Kruger and the results were promising (the vaccine worked by immunizing female elephants so that sperm could not fertilize the eggs). The vaccine could also be delivered remotely via darts – i.e. the elephants did not need to be sedated and hand injected.
The GMPGR welcomed research leading to a better understanding of the animals in the reserve and agreed to become a test site for a long-term trial of the vaccine to determine how effective it was, whether it was safe for the elephants and whether it had any effect on elephant social behavior
In May of 2000, 18 female elephants, including Kwatile (who was then 56 years old) were administered the initial vaccine dose followed by a booster injection via a dart gun. Dr. Audrey Delsink (who received her Ph.D. for her work on the behavior and social dynamics of the Makalali elephant herd) became the resident elephant expert and guests who stayed on the reserve were treated to mid-day talks by her detailing the biographies of the elephants on the reserve, including Kwatile and her group.
Over the next fifteen-plus years, the elephant contraception project on Makalali demonstrated very clearly that the vaccine was effective (actually 100% effective among the Makalali herd), was safe for both the elephant cows and any calves, was reversible and had no visible impact on social and individual behavior during the project. However, Kwatile did not live through the project. On October 26, 2008, having led her clan with grumpy efficiency through many upheavals, she died of natural causes (she was estimated to be 64 years old at the time). Dr. Delsink was there for the “hand-over” when she breathed her last.
The project, of which Kwatile was a core part, has now developed into the widespread, non-lethal and humane management of almost one thousand female elephants in conservancies and provincial and national parks throughout South Africa. In southern Africa, poaching has not yet become the scourge it is in the rest of the continent. The main issue is the humane management of population growth to manage the impact of elephants on their habitat and to minimize human-elephant conflict.
Print page