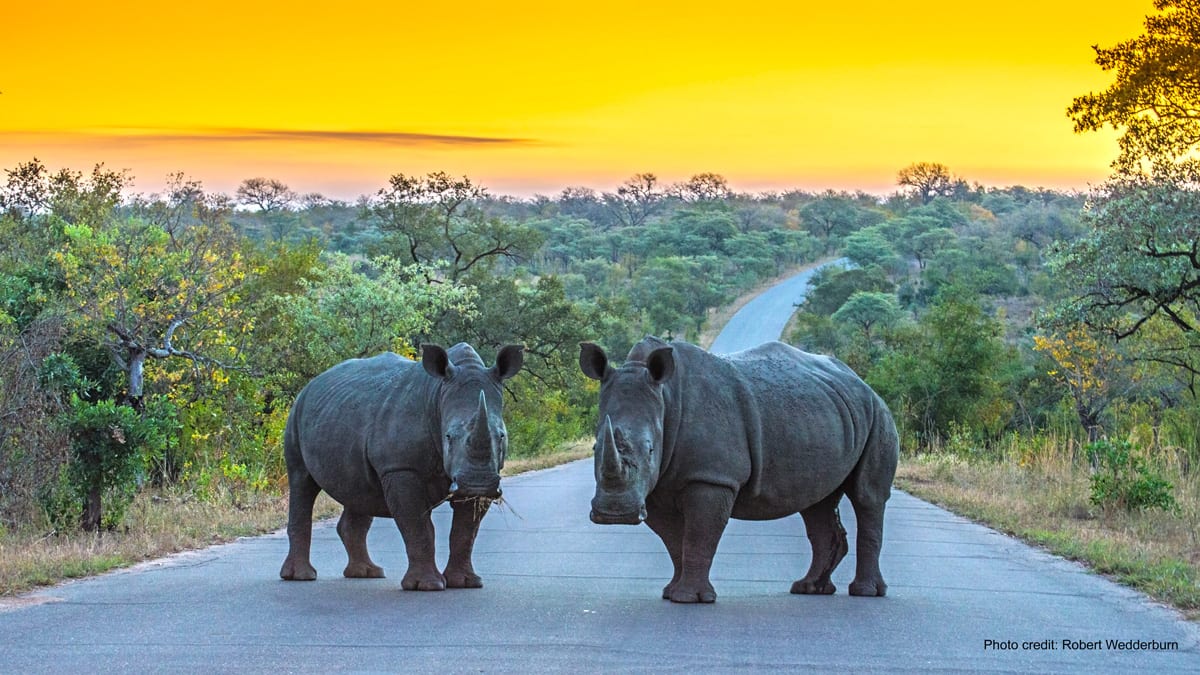 The Kruger National Park in South Africa is home to the largest wild rhino population in the world. But a 2019 census documenting a dramatic decline in the Kruger rhino population in just ten years has shocked rhino conservation organizations. The park last conducted a census of its rhino population in 2010 when it estimated that there were over 10,000 rhinos in the park (mostly the southern white rhino but also including a few hundred southern black rhino). But the latest census estimates there are now only 3,500 white rhinos and 270 black rhinos in the park – a 70% decline in just ten years!  The reason for the decline is no mystery. Rhino poaching in Kruger (this is the second major wave of such poaching) and the harvest of rhino horn (purportedly retailing at a price twice that of gold in Vietnam and other countries in the Far East) has been out of control for a decade. The second wave has focused mostly on the white rhino (which has two horns weighing around 5 kg versus the black rhino’s one horn weighing around 1.5 to 2 kg). The first wave of rhino poaching occurred mainly in East Africa in the 1970s and 1980s and reduced the black rhino population from 65,000 individuals to 4,000. 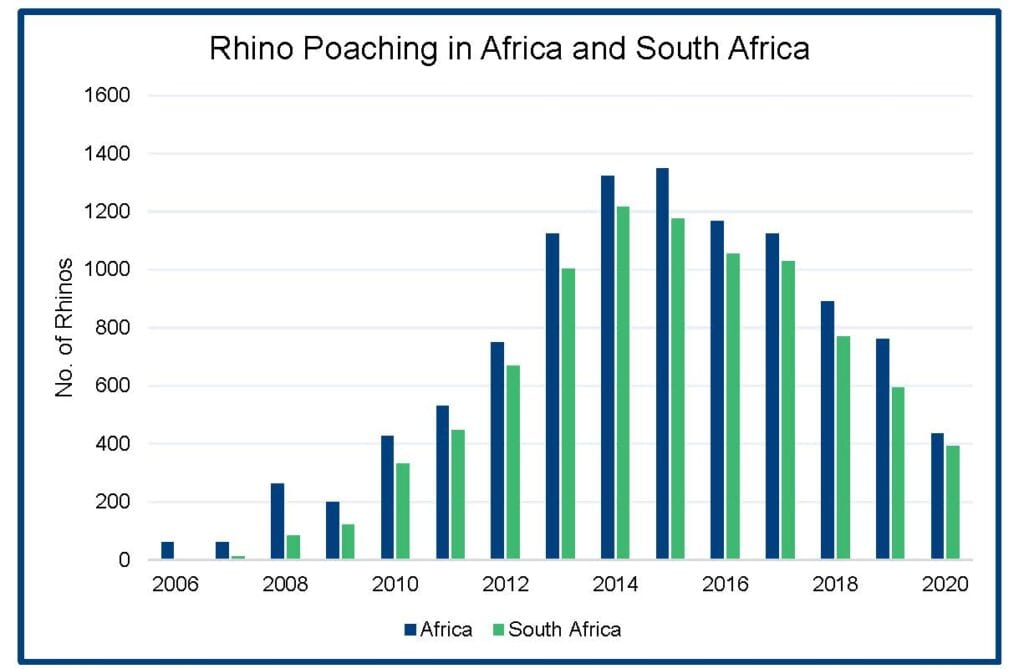 The sudden collapse of the Kruger rhino population follows what has been considered a major conservation success – rescuing the southern white rhino from imminent extinction. In the 1950s, when conservationist Ian Player began his campaign to save the white rhino, it was estimated there were only around 400 southern white rhinos left in South Africa. From that inauspicious beginning, Player and his colleagues nursed the existing populations in KwaZulu-Natal and worked out how to capture and translocate rhinos safely to other parks. Slowly and steadily, the white rhino population in South Africa grew to over 15,000 with an estimated 10,000 in Kruger in 2010. However, from around 1990, rhino breeding and translocation became an important and profitable part of the developing wildlife industry in the country. [In 2011, the wildlife industry in South Africa had annual income of around $600 million with hunting accounting for $469 million and translocation and sales of wildlife accounting for $108 million.]

South Africa still has the largest population of rhinos in the world (mostly white but also a few black) numbering around 14,200 individuals despite the poaching crisis. These rhinos consist of three distinct groups. There are the wild rhinos in national and provincial parks – currently numbering around 6,100 individuals. There are 2,500 rhinos on “rhino farms” where they are being intensively managed by individuals who are “investing” in rhinos in the hopes that a legal trade in rhino horn will be established. And then there are 5,600 rhinos on private conservancies that cater to ecotourism and/or trophy hunting. Individual conservancies typically have relatively small numbers (10-40) of rhinos kept at low density.

The wild rhinos are currently bearing the brunt of the poaching, but the owners of the “farms” and private conservancies have had to upgrade their security (leading to more expenses) to keep their rhinos safe. A recent survey (conducted in 2015 and 2018) of members of the Private Rhino Owners Association (PROA) found that some owners (around a quarter) had decided to “disinvest” in rhinos because of the increase in anti-poaching costs and the stress of having to be on the alert and on guard all the time. Private owners have, so far, been very successful in preventing major rhino losses but the loss of tourist revenue in 2020 and the increased costs of providing security is likely to force more members of PROA to get rid of their rhinos. However, it is unclear where these rhinos might go because the market for rhinos has collapsed in the last few years.

As with other charismatic wildlife such as elephant, lion, tigers and giraffe, it is unclear what the future for rhinos might be. New security measures (e.g. tracker dogs and drone technology) are being deployed to deter poaching with some success. But the arguments over the use of trophy hunting fees and the development of a legal market in rhino horn continue. Proponents of a legal market argue that rhino horn sales could ensure that rhinos will not go extinct. But rhino farming seems wrong in some fundamental way even though South Africa has been promoting wildlife farming for years (and recently classified 32 species of wild animals including lions, rhinos and cheetahs into the same category as agricultural livestock). China has also developed a major ($74 billion a year) wildlife farming industry, in part to alleviate rural poverty but is now reconsidering that industry because of its possible role in initiating the Covid-19 pandemic.

Farming rhino for their horns (and other body parts) would probably “save” rhinos from extinction because investors would make sure their rhinos and their horns are protected from poachers but at what cost. First, wildlife farming is not known for its concern for animal welfare and studies indicate that such industries increase the pressures on wild populations (which can be “sourced” at relatively low cost while farmed wildlife are carefully protected). A new 2020 report of Chinese public attitudes to wildlife consumption found that wildlife farming increased the acceptability of wildlife products such as bear bile and tiger bone wine and diminished support for legal sanctions against such products. Therefore, the likely outcome of accepting rhino farming would be continued poaching leading to the likely extinction of wild rhino while domestic rhino populations grow behind their security fences.

Are we willing to accept a future in which wild rhinos would disappear because we are unable to set aside the resources and establish policies that would provide secure habitats for a reasonable population of wild animals?