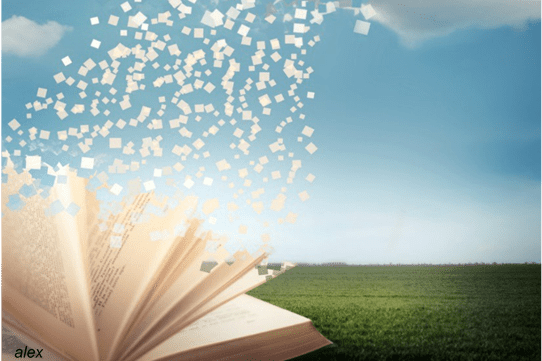 WellBeing International is now focusing on the ways that we as individuals can modify our behavior to improve our own health and well-being as well as reducing our impact on the world around us – positively affecting what we have called the PAE Triad (People, Animal and Environmental well-being). While all of us can do something to reduce our impact, it is not easy to make and maintain the necessary lifestyle changes. Still, whatever steps we can take to reduce our impact on the world are a positive step. Individuals need to be encouraged to make such changes for their own and global well-being. Delivering such information across cultures, languages and religions to billions of people is a challenge, but social media provides opportunities to overcome this obstacle.

The study, reporting what may be achieved in personal health by individuals willing to make relatively modest lifestyle changes, is summarized in the Harvard Gazette. The results are presented in the table below. Those who followed at least four of the five healthy behaviors enjoyed many more years of “disease-free” life than those who maintained none of those healthy habits. These relatively modest changes in lifestyle led to an average of 10. 7 (women) or 7. 6 (men) additional years of life free of major chronic disease. Those extra disease-free years certainly seem be well worth the effort.

Four of the five behavior changes are relatively self-explanatory but what did the researchers judge to be a “healthy diet.” This was assessed using the Alternate Healthy Eating Index (AHEI) score. Subjects were considered to be living on a healthy diet if they scored in the top 40% on the AHEI. The AHEI is based on the following nine diet changes–consumption of more vegetables, fruits, whole grains, nuts and legumes, and polyunsaturated fats and the consumption of less sugar-sweetened beverage and fruit juice, red meat, sodium and alcohol. The AHEI was developed as an alternative to the US government’s Healthy Eating Index (HEI) and was most recently updated in 2010. [The original HEI failed to predict chronic disease risk and mortality whereas the AHEI has been much better at predicting such risk. ]

The AHEI element that it is better for one’s personal health to consume less red meat is now becoming more mainstream. Many organizations are now grappling with and discussing the adverse environmental consequences of diets high in meat and dairy. Professor Charles Godfray, an environmental scientist and the Director of the Martin School at Oxford University (a multidisciplinary school founded specifically to tackle the big questions facing people and the world), and his colleagues at Oxford had a paper published in Science in 2018 specifically addressing meat consumption and human and environmental health.

Although meat consumption has plateaued in some parts of the world (Europe and North America), it is growing rapidly elsewhere and now averages around 44 kg per person per year in the world as a whole. As the authors note, meat is an important source of nutrients for individuals on low incomes with restricted diets, but high meat consumption may increase the risks of some forms of chronic disease. As regards environmental costs, the production of meat is a significant factor in humanity’s growing demands on the environment. The chart below indicates that 77% of agricultural land is devoted to meat and dairy production but that meat and dairy produces only 18% of the world’s calorie supply and 37% of the world’s protein supply. 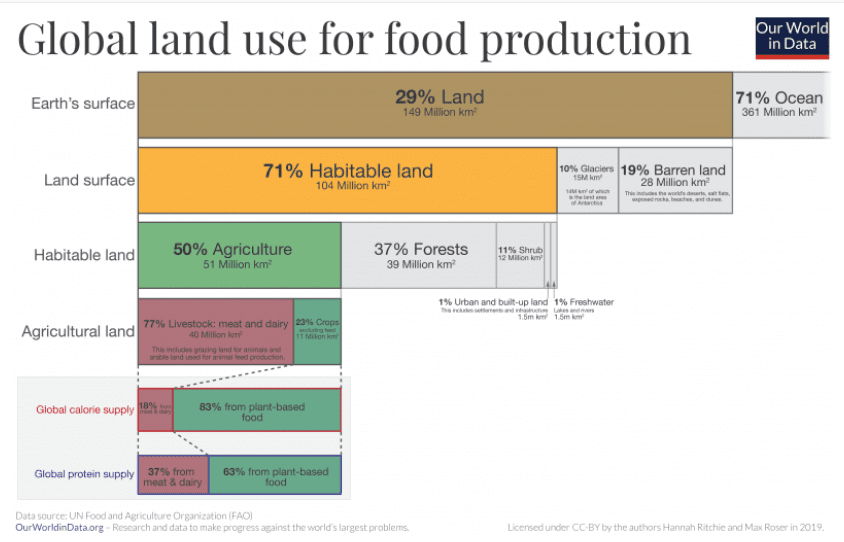 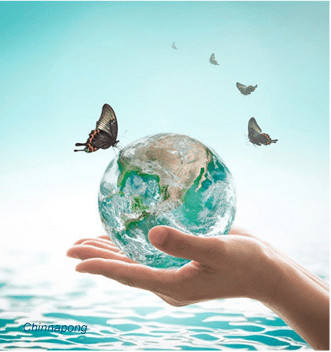 Despite the inefficient use of land to produce meat and dairy, the world remains committed to increase meat production. In 2019, the UN Food and Agriculture Organization (FAO) projects that world meat production will double by 2050. But it is not clear how this doubling could be achieved. The current level of meat and dairy production uses 30% of the world’s habitable land. Doubling such production would require 60% of the world’s habitable land leaving only 40% for forests, crops for people, and all remaining uses. In contrast, it would be much less demanding on the environment (and the wildlife currently clinging on in the few remaining natural areas) to shift global diets away from meat and dairy to accommodate the nutritional needs of growing human populations as well as retaining enough land to support natural areas for wildlife and global resilience.

But reducing or capping the consumption of animal products will not be easy. Our meat and dairy habits are very resistant to change. A colleague, who writes a blog on human-animal interactions, has written several articles on vegetarianism. In one of them, he notes that there are currently three times as many ex-vegetarians (around 6-9%) than vegetarians (around 2-3%) in the United States. Vegetarianism (and veganism) is a minority lifestyle globally with less than 10% of the population in most countries voluntarily choosing to be vegetarian. Strategically, it would likely lead to more change more quickly to institute policies to reduce the consumption of animal products rather than working to eliminate such products altogether.