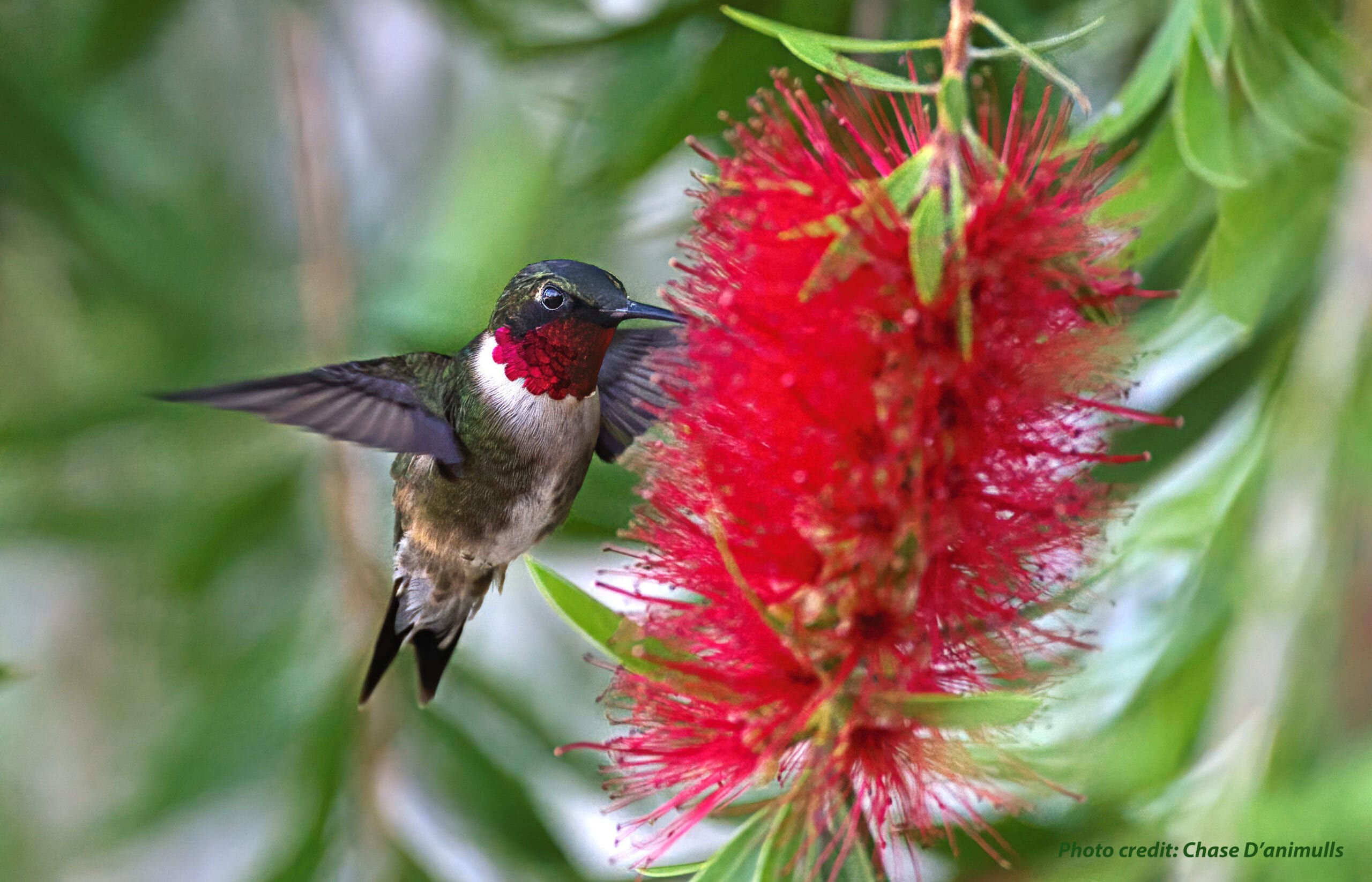 Posted at 01:45h By Kathleen Rowan

It is February in Costa Rica, and Maria, a spunky Ruby-throated hummingbird (Archilochus colubris), is just waking up from her deep state of sleep (torpor). It was colder last night, and she needed to conserve her energy. The average hummingbird is approximately 7.1 to 8.9 cm (2.8 to 3.5 in) long and 2 to 6 gm (0.07 to 0.21 oz) in weight. In anticipation of her long and grueling trip to the east coast of the US, Maryland, to be specific, Maria has recently gained weight. She now weighs 6 gm, close to a 40% gain over her normal body weight.

Interestingly, she does not need a GPS to find her way and, if she thinks of her uncanny sense of direction at all, puts it down primarily as an instinctive sense. [Ornithologists believe she may be sensitive to light polarization and possibly the earth’s magnetic field.] This trip will be her third, and she has not missed her destination yet! Her journey, which originates in San Rafael, Costa Rica and ends in Potomac, Maryland, is approximately 3,200 km (2000 miles) long. Maria has chosen to shorten her trip by using the fast lane, i. e., crossing the Gulf of Mexico. This segment of her journey is approximately a 20-hour, 805 km (500 miles) nonstop flight. Except for the Gulf of Mexico segment, Maria will travel about 40 km (25 miles) a day and take refreshment breaks along the way. 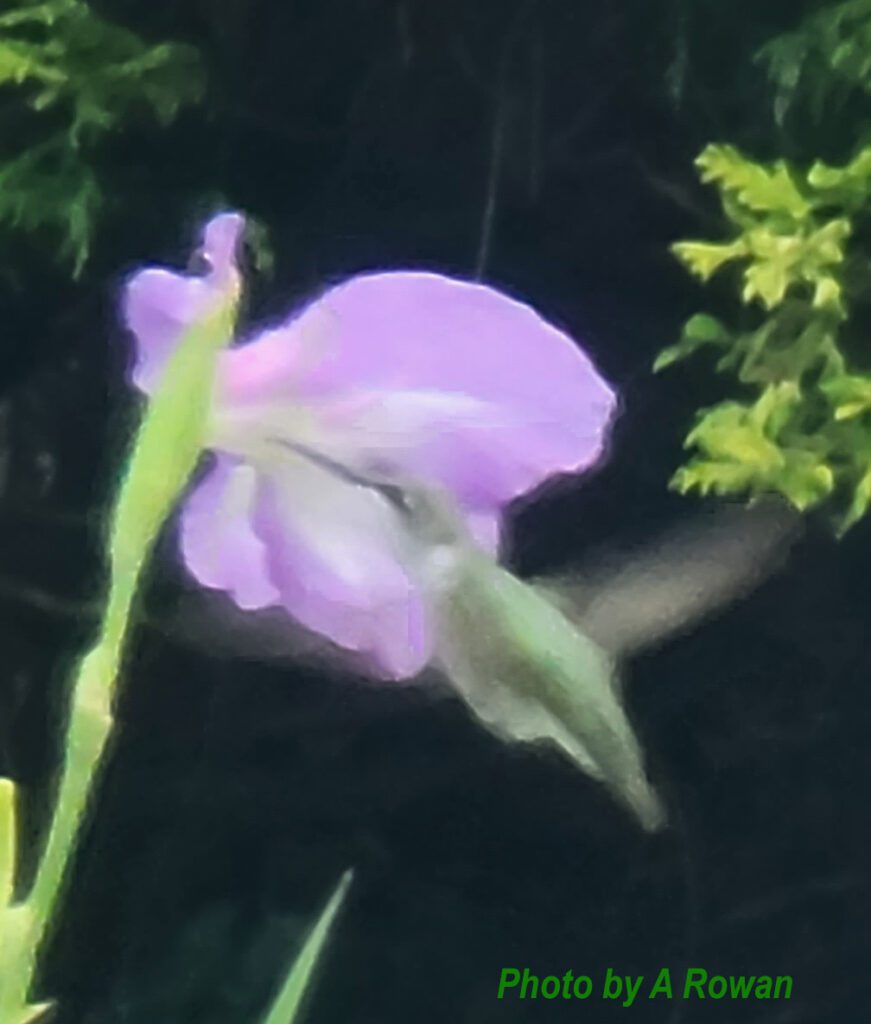 Maria arrives exhausted in Potomac (her wings beat 53 times a second) and needs to refuel. Because Maria can see into the ultraviolet spectrum (humans cannot) and her color vision is good, she immediately locates her favorite honeysuckle flowers from her previous trips. Later in the summer, she will feed on her other favorites, red and orange gladioli. She is delighted that the local humans remain committed to providing her favorite gourmet meals.

Rested and with a full belly, Maria begins to explore the neighborhood area; after all, there is a purpose for this trip. After a brief exploration, Maria locates the tree where she had made a nest last year and will shortly begin to build a new nest in the same tree. In addition, she observes several male ruby-throated hummingbirds protecting what appeared to be their established territories. Male hummingbirds arrive 10-14 days before females, so these antics must have been occurring for at least a week. In any event, Maria meets Carlos, who displays beautiful bright iridescent red plumage on his gorget (neck). Although Carlos provides eye candy for Maria, he spends too much time diving and showing off. On the next day, Maria meets a more subtle suitor named Rafael. His name reminds her of her winter home, and that seals the deal.

The male ruby-throated hummingbird does not participate in building nests, feeding, or any other activity of a reliable father. Hence, Maria has to construct the new nest herself. Based on her experience last year, Maria knows the tree is within easy reach of plenty of food and will protect the nest from heavy winds and rain. Maria uses moss, leaf hairs, willow pieces, and lichen along with spider silk to build the nest. The spider’s silk provides an important glue-like building material that is strong and allows the nest to stretch out as the little hummers grow. It takes Maria about a week to build the nest. Mid-week, Maria makes a “note to self” to reuse the nest next year and forego this building new nests. 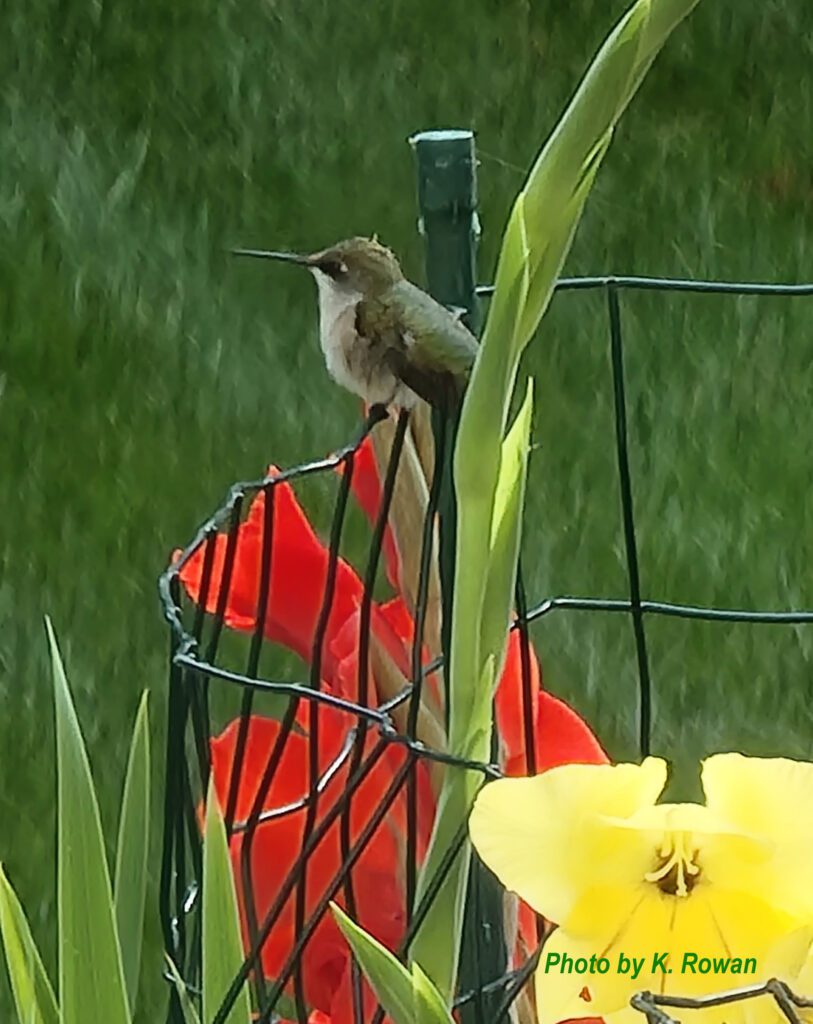 Shortly after completing the nest construction, Maria lays two eggs. It is now that Maria could use some real help. She incubates the eggs all day and will only leave them for about five minutes every hour. After two weeks of this, Maria is impatient for the eggs to hatch. A few days later, two healthy hatchlings emerge. She concentrates on feeding the little ones and marvels at their steady growth. About two and a half weeks pass before the hatchlings begin to fly and leave the nest for short periods. After three weeks, Maria has completed her task; the hatchlings are fully developed and have gone for good. They will need to make it back to a winter home by themselves. Maria experiences a spell of “empty nest” syndrome!

It is now late August, and Maria has already begun to gain weight in preparation for the long journey back to San Rafael. She is contemplating skipping the Gulf of Mexico segment and choosing the land route back. There are several hurricane threats causing disruption.

Although her tasks have been demanding, Maria loves her time in Maryland, where she feels safe and has plenty of food. However, she looks forward to her time in San Rafael as well. While the average lifespan of her species is only five years, Maria knows of one Ruby-throated hummingbird that lived nine years. Maria intends to take good care of herself and see if she might push beyond the nine years.

If you provide nourishment to hummingbirds, please refer to this site for guidance on “Feeding Hummingbirds.”